IN four years, Reliance Jio used its oil and gas revenues to finance its entry into telecom and become the leading Indian player. It bled the others with its initial low cost, predatory pricing till they surrendered, letting Jio emerge as the undisputed market leader.  Jio has also made claims that its network is free from any Chinese equipment, and of an in-house, ‘indigenous’ 5G technology, positioning itself as a major player in the US-China 5G trade war.

But even with its fat oil war chest, the Reliance empire had a huge overhang of loans. To liquidate the loans, it floated Jio Digital as a new platform for services riding on top of the Jio telecom network. In a scant few months, by selling about 30 per cent of stakes in this company, it has raised or in the process of raising capital, to the tune of $22 billion, and wiping out a major part of its debt. Apart from financing companies who have invested, there are key tech players – Facebook, Google, Microsoft – with strategic investments ranging from Facebook’s $5.7 billion, Google’s $ 4.5 billion and Microsoft’s $2 billion. The other $10 billion investments in Jio are from a clutch of venture funds that include sovereign funds of Abu Dhabi and Saudi Arabia. 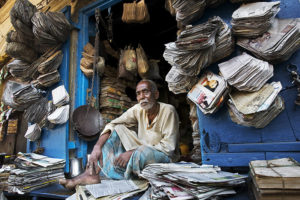 It is still not debt free as it claims, but this article in not about the intricacies of financing of the Reliance empire. It is about who are these companies that have invested in Jio and what are Reliance Jio’s plans for us Indians?

If we want to understand what Reliance Jio’s market plans are, we need to examine its technology partners who are making strategic investments in Jio. They have all decided that Reliance Jio is the key player in the telecom business, and if they have to reach either the Indian consumers or Indian business, they have to align themselves with Jio. The services can be from selling goods, video streaming services, video conferencing, payment gateways to providing digital infrastructure services to business. With the Covid-19 pandemic, the internet has become even more critical for people, and this is going to stay beyond the pandemic. The pipeline that connects all of us is now controlled by Jio, and that is why global tech companies are queuing up to get a share of the Jio’s pie.

Simply put, Jio owns the primary communication network that connects all businesses and all consumers. Just as Reliance used its oil monopoly to leverage itself into becoming the leading Indian telecom player in just four years, they are now leveraging their leading telecom position to create new monopolies that will provide services over this network.  They are also eyeing a place in building of future 5G networks in other countries, aligning themselves with US in the 5G tech and trade war.

Successive governments from Congress to BJP have allowed Reliance to assert its monopoly muscle. We are now in the end game of Reliance asserting its total control over the Indian market. The Modi government has even allowed Reliance a backdoor into India’s largest bank, the State Bank of India (SBI), via its 30:70 joint venture with Jio Payments Bank. So Reliance has also the enormous resources of the State Bank of India at its disposal. In Modi’s Atmanirbhar Bharat, India is truly becoming, not self reliant, but self Reliance!

Each of the digital monopolies aligning with Jio, compete against each other, but also complement each other. Google is the key player in a host of cloud services for the personal market through its dominance of the search engine and gmail. It is this space that it uses to get a huge share of digital ad revenues. Facebook competes with Google for ad revenues, but in the social media space, the bulk of its ad revenue is from Facebook, and Instagram. Though it has business offerings using the WhatsApp platform, this has yet to develop as a major platform for business. While Microsoft dominates the PC based software market, it has also built a large cloud services platform for businesses, where it competes with Amazon, the market leader in this area. Google offers cloud services to companies, but is still some way behind both Amazon and Microsoft.

All these companies need telecom infrastructure to reach their consumers or businesses.  As each of them try and enter new areas, such as finance and payment systems, they need not only tech infrastructure but also a way of ‘negotiating’ the regulatory structures that protect the consumers and the sovereignty of the country. It is here that Reliance offers a double advantage. It not only has its huge telecom infrastructure but also has the ability to bend the country’s regulatory structures. Here both Google with its Google Pay, and Facebook with its so-called digital money could find a backdoor into the Indian market using Reliance’s existing financial infrastructure like Jio Payment Bank.

In the area of retail – Reliance Retail – its tech partners are not competitors. Amazon and Walmart-Flipkart are. It may already be a crowded market place, with many other players getting into e-commerce. Here again, the Reliance philosophy is simple: build economies of scale, bleed the others through under pricing, even if means losses for some period. Once the competitions surrender, then the prices can increase, just as it has in the telecom market. This is tried and tested Reliance policy, from Dhirubhai’s times. It needs deep pockets and a compliant government and regulators. In this, Reliance is twice blessed, both by the Congress and the BJP.

What is new in the Reliance game plan is the talk of a 5G network, built entirely indigenously and in-house. There is no evidence that Reliance has the capacity to develop the technology for building digital networks, let alone enter 5G from scratch. Even in the petroleum sector, it has always bought technology as products and rarely built any of its own. Its entire 4G network was built by Samsung, the South Korean company that is also competing with Huawei in the 5G market. In the recent investments in Jio, there is also Qualcomm, one of the major competitors of Huawei for manufacturing wireless chips. Though its investment in Jio is small – only $97 million compared to the billions of dollars of the other tech players, are Qualcomm and Samsung, Jio’s partners in its ‘indigenous’ 5G technology?

Huawei, Qualcomm, Samsung all have strong patent positions in the 5G market. Reliance has none that we know of, unless it has bought some small players for their intellectual property. Reliance strength has been to build at scale and by doing so, achieving economies that its competition could not match. The tech business is very different. It is developing new technologies and creating needs that do not exist yet. They are created by virtue of the technology. Think of personal computers, mobile phones, search engines. In all of these, the market followed the technology, and was built from scratch. The scale came later. Deploying technology at scale, which has been the Reliance core game, does not lend itself to building technology from scratch.

Reliance is using its dominance in mobile network to emerge as the sole player in 5G. BSNL has been gutted long back, and now Vodafone-Idea is also following suit. Bharati Telecom, already burdened by its loans and license fees that it has avoided earlier and now has to pay, will find it difficult to compete with the license fees that 5G will have. India offers the largest mobile market in the world after China. With a 5G monopoly in the offing, Reliance wants to cobble together an alliance of US, South Korean and possibly other vendors to face the global challenge of Huawei and Chinese equipment suppliers. This is the signal that Reliance is sending to the world “Join us and we will make you win, but under our flag.” Again, leveraging scale for technology, the familiar Reliance game.

Can this succeed? While predicting the future is foolish, this transformation is far more complex than Reliance envisages. But even if they fail, they will make money out of their failure. Reliance after all has the second biggest market in the world as captive. That has what successive governments have gifted the Ambanis. This gift will still go on giving, even if it fails to create an ‘indigenous’ 5G technology.