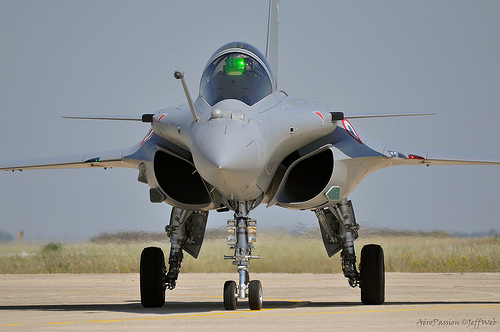 History repeats itself, wrote Karl Marx, first as tragedy then as farce. One wonders how he would have characterized a third repeat, when all the tears are done and even the disorganized buffoonery is over.  Whatever term is used, the fresh tender for fighter aircraft being floated by India is surely way beyond farcical. The confusion around an already shambolic procurement process betrays a pathway being opened up for arbitrary decision-making by the political leadership, even at the expense of carefully assessed military and strategic requirements including self-reliance in this crucial sector, with dangerous potential for backroom dealings, currying favours with preferred foreign countries, and  promotion of crony capitalists in India as the thin edge of a wedge to privatize the domestic defence production industry.

To see what lies beyond farce, let us briefly recap the extraordinary twists and turns in India’s fighter aircraft acquisitions. Anticipating the impending phase-out of the MiG-21, Jaguar, Mig-23 and Mig-27, as well as delay in the indigenous Light Combat Aircraft (LCA) project, and given the dangerously widening gap between available and required fleet strength, already down from the sanctioned and healthy 44 squadrons in the mid-1980s to a likely 30 by 2015, the initial tender for 126 multi-role combat aircraft was issued in 2004 after initial conceptualization in 2001.

Bids were invited from both light single-engine and heavier twin-engine aircraft, so as to fill the gap between the LCA light fighter and the heavy, air superiority Sukhoi SU-30 MKI. The grapevine had it that the Air Force had a clear preference for the medium-weight Mirage 2000 which had performed superbly during the Kargil conflict. But India dithered as usual in decision-making, and the French firm Dassault meanwhile closed its Mirage production line.

After 7 long years, India issued a revised tender for 126 Medium [weight] Multi-Role Combat Aircraft which, in the IAF’s considered opinion, met its fleet-mix needs the best, with sufficient numbers of LCA, Rafales and Sukhoi-30s while also doing away with the cumbersome mix of numerous types of aircraft.Â  The renamed MMRCA tender floated in 2011 had thus shifted the goalposts and eliminated the light fighters Lockheed Martin F-16 from the US, the Saab Gripen NG from Sweden, and the Russian MiG-35.

In the twin-engine category, Dassault offered its Rafale fighter. Other contenders were Boeing’s F/A-18 Super Hornet and the Typhoon Eurofighter. Again, after rigorous assessments and field tests spread over several years, the F/A-18 was eliminated, and the Rafale was finally chosen ahead of the Eurofighter. However, the Modi government shockingly scrapped the MMRCA tender and clinched a hush-hush inter-governmental deal for only 36 Rafale fighters in fly-away condition at a summit meeting. Reasons given were that the price negotiations with Dassault were stalled, the aircraft were urgently required, and the cost was working out to be too high. The decision was taken at the top-most level, apparently without the knowledge of the Defence Minister or the IAF, and without even going through the Cabinet Committee on Security which, it now transpires, retrospectively approved the deal only in August 2016, more than 16 months later!

The IAF ‘s requirement for 126 medium-weight twin-engine fighters, carefully assessed over a decade or more, went out the window overnight opaquely, arbitrarily and without explanation. Anil Ambani led Reliance Aerospace was selected as Dassault’s partner for most of the 50% offsets (Rs.30,000 crore) obligated under the deal, a windfall for a company with no aerospace manufacturing experience. Details of the pricing, covering additional weapons, spares, and maintenance, remain confidential and controversial. Who knows what else might have transpired in Paris!

But the curtailed size of the order had clearly left a yawning gap. And were finances really a problem? Inexplicably then, a fresh tender was thereafter issued, this time for single-engine fighters, a category earlier dropped from the decade-long MMRCA acquisition as not the crucial need! Had the IAF ‘s view on its fleet mix suddenly changed? If so why, based on what strategic calculus,  and where was this reflected? Who else drove this sudden shift, and that too at a time when the indigenous LCA programme was making good headway, development of a Mark-II version was at an advanced stage, and production rate was being expanded by HAL? Or were there other pressures at work, for instance from the US, which was winding down its F-16 production line back home?

In a further astonishing twist, yet another tender, changing the earlier one, has now been issued, for both single- and medium-weight twin-engine fighters, with the same contenders as in the MMRCA tender which was unceremoniously scrapped by the Modi government! This is a mockery of the entire MMRCA procurement and raises serious questions about the rigour in its framing and implementation. Unrefuted reports in the press have claimed that the government has expressly pushed for inclusion of the Boeing F/A-18 in this latest tender, despite its rejection by the IAF during the earlier MMRCA field trials. Some sources have ascribed this to the Navy expressing interest in this aircraft, expressly designed and used for carrier-borne operations, for deployment on Indian aircraft carriers. But again, even though the MiG-29 K currently in service with the Navy has faced many problems without adequate redressal by Russia, why even consider an ageing aircraft in service only in Australia besides the US, and rejected by India rejected earlier, when the more modern Rafale also has a proven carrier version, as does the Gripen?

It is highly unlikely that all this chopping and changing is due to indecision or confusion in the IAF. No doubt the IAF has not exactly distinguished itself in drawing up and clearly enunciating a medium- or long-term strategic vision and a projected fleet mix based on it. Equally, though, ad hocism is in-built in the entirely civilian and bureaucratic Defence Ministry. As seen above, there are many indications that political interference, without expertise or long-term vision to back it up, is at work.

Nobody would argue that the political leadership has no role to play in decision-making regarding acquisition of military hardware. Other things being equal, political considerations may indeed weigh as regards strategic vision, total budgetary outlay for defence and distribution between the three services, or even choosing between manufacturers from different countries keeping geo-political considerations in mind. Development of indigenous capability as a strategic industrial and security objective is also a quintessentially political task, in which the current dispensation has singularly failed, especially by deliberately pushing for private Indian manufacturers despite glaring absence of technological capacity. Yet, an institutionalized integration of military, strategic and political perspectives and personnel for strategic planning and correlated acquisitions has been historically sorely lacking in India, and its absence is being badly felt today with burgeoning military hardware imports, always susceptible to subjectivity, influence-peddling, manipulation or worse.

The current fighter aircraft imbroglio has totally undermined the Defence Procurement Procedure (DPP) crafted over a decade ago with the goal of reducing subjectivity, arbitrariness and opacity in decision-making processes, and introducing rules and procedures for procurement of defence hardware. In typical Indian bureaucratese, however, while they could become a cause for interminable delays and constraints on bold decision-making, ways could always be found to circumvent the rules or completely distort the original intention, and the DPP has been amended several times to suit the evolving perspective of the government of the day.

In the Rafale deal, the Modi government argued that the DPP simply did not apply to government-government deals, where no tendering was involved! But surely, even inter-governmental deals require some rationale, some transparency and sound evidence that alternatives have been considered. The offsets clause, for instance, has been taken as a given even in the Rafale deal. But it’s very raison detre has been undercut in both spirit and the letter of the DPP. Offsets mandating some proportion of manufacture within the country have been made part of acquisition procedures in several countries, primarily as a means to acquire advanced technological capability. In India, especially under the BJP, offsets have been viewed almost solely as a financial condition. Whereas offsets should be utilized to enable acquisition of technology, especially through identification of strategic technology gap areas across different hardware and deals. The DPP was however actually amended to allow Boeing, for example, to use offsets to make components for civilian aircraft in deals involving military equipment, ostensibly because the numbers being bough did not permit any sizeable manufacturing in India. In the Rafale deal, which involves only 36 aircraft in a fly-away condition in which no India-based manufacturing is envisaged, the Anil Ambani-Dassault JV has been allowed to deploy offsets to make components or sub-assemblies for Dassault’s Falcon executive jets, deceitfully terming it part of the DPP’s Make in India category! So a huge amount of Rs.30,000 crores of offsets will result in little or no technology absorption by India.

The DPP also contains a particularly egregious stipulation that single-vendor situations, where only one party is available or left after consideration of all applicants, should be avoided. But if bureaucratically interpreted, this can severely hamper acquisition of specialized equipment, and several important tenders have been cancelled for that reason. In the MMRCA acquisition, whereas the Eurofighter and the Rafale were short-listed, the Rafale was ultimately declared to be the winner or L1 (strictly, the lowest bidder). According to the DPP, price negotiations with L1 start only after this stage. This dragged on interminably, with Dassault apparently also balking at technology transfer and performance guarantees. The labyrinthine and dysfunctional procurement process tied Indian hands while favouring which could bargain indefinitely. Surely, negotiations covering all aspects such as base price, life-cycle costs, spares and after-sale services, technology transfer etc should be held with both finalists if they satisfy requisite technical conditions, and the contender offering the best terms selected within a specified time frame.

Clearly, defence procurement processes in India needs to be completely overhauled. First, a documented strategic vision is required, based on which properly envisaged rather than ad hoc acquisitions or indigenous R&D could be planned and undertaken. Second, this process and institutional structures for the same should involve and bring together user wings and/or integrated commands of the armed forces, the political leadership and strategic experts so that the user services in particular are not saddled with ill-planned equipment or those acquired due to extraneous considerations. Thirdly, acquisition procedures should facilitate effective, reasoned, timely and transparent decision-making. Finally, all this should be done within an overall framework of advancing indigenous technological know-how, manufacturing capability and industrial base as critical needs for development as well as security.