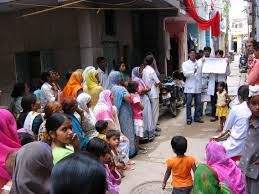 THE healthcare sector has been consistently grabbing headlines in recent weeks. First came the reports of how two prominent private hospitals in Delhi “ Max and Fortis “ fleeced patients in blatant disregard of all ethical norms.  Bills were inflated with impunity and relatives were harassed even after the patient was dead. Then came private hospitals. A few days ago the National Pricing Authority of India, based on an audit of some private hospitals, the grand announcement of Modicare in the Union budget, a plan to outsource hospital care services to in Delhi, published a report of how crores were being siphoned by private hospitals by massively inflating the costs of medicines and other consumables supplied.

These are not isolated incidents but reflect a deep malaise that afflicts healthcare in India. What is important is to make the links between the BJP government’s obsession with promotion of insurance based healthcare and the visible evidence regarding rising corruption in private hospitals. It is necessary to look beyond the traditionally recognised modes of corruption while tracing the impact of aggressive neoliberal polices pursued by the government, on corruption in general and corruption in the health sector in particular. Neoliberal polices in their essence involve a transfer of power from public institutions to private enterprises. Corruption has been defined as ‘illegitimate use of government power to benefit a private interest and neoliberalism is the epitome of a corrupt system. This manifests in the case of public services such as healthcare services in the State’s active role as a facilitator of the dominance of private enterprises in the provision of services. We witness evidence of this every day, when the government undermines public services while extolling the virtues of private enterprises.

Neoliberal economic policies within the country and the integration with the globalised economic and governance systems serve to institutionalise corruption, including in the health sector. At the ideological sphere, the role of the State is sought to be redefined in a manner that benefits private interests. At the global level the restructuring of global governance results in a shift from the earlier nation State driven process to one where private corporations, foundations and management consultancy firms are provided space in governance structures. Thus the WHO, which is part of the UN system, is much less powerful than private foundations like the Bill Gates foundation and management consultancy firms such as McKinsey. It is the latter who drive policies globally, and increasingly in India as well. Most importantly we also see the capture of regulatory structures of the State by private actors who are supposed to be the subject of such regulation.

Since these processes act by changing public policy, their effects are seldom identified as corruption, but rather as a change in policy. Thus Modicare is seen as a new policy initiative and not as a planned effort by the government to hand over healthcare to the private sector and thus offer them major avenues for profit making. Such initiatives need to be clearly identified as public decision making that act in favour of private interests. Policy shifts that favour private interests, both nationally and at the global level, need to be correctly identified as the fundamental source of corruption that subsequently translates into corrupt practices at the local level. These policy shifts immensely widen the scale of operations and power of private enterprises, and thus also open up new forms of corrupt practices.

IDEOLOGICAL SHIFT IN THE ROLE OF THE STATE AND HEALTHCARE SERVICES

The BJP’s health assurance model and its flagship plan for Modicare is aligned to a global neoliberal model of health care provision termed as Universal Health Coverage (UHC). UHC promotes a shift in the role of the State, from a provider of healthcare services to a ‘manager and ‘regulator’ of healthcare services. In such a model the bulk of provision of care would be by outsourcing to private providers, just as Modicare promises to do.

By the late 1990s most developing countries had inherited crumbling health systems as a consequence of fiscal austerity policies advocated in the past two decades by multilateral agencies such as the World Bank and the IMF. In India, public services in healthcare were systematically starved of funds since the initiation of neoliberal reforms in the early 1990s. Like in India, the world over, it was finally acknowledged that urgent measures are necessary to build health systems. To remedy the situation, there could have been efforts to prioritise the rebuilding and strengthening of public systems. Instead, the role of the State (that is governments) was transformed into that of a ‘manager’ or a ‘regulator’ of healthcare services rather than one of a provider of services. Corruption in such a system is no more limited to individual instances of corrupt government officials engaged in securing illegitimate gains for private interests but assumes a system wide dimension where the entire State machinery and a range of policies are directed at securing increased revenue and profits for private enterprises. Corruption takes the form of “institutional corruption” as distinct from petty corruption, such as the payment of bribes for political or other favours. Corruption becomes embodied in the very purpose of the institution leading to regulatory agencies being constrained against acting in the public interest and required to act in the market interest.

As the role of governments is increasingly restricted to that of a ‘regulator’ there is a major pitfall faced by public regulatory agencies “ what has come to be known as regulatory capture. It is a phenomenon where regulatory agencies that are designed to regulate industries for the public interest are captured by the industries they are supposed to regulate. As a consequence, regulators end up regulating industries in a way that benefits the regulated industry, rather than the general public.

Regulatory capture takes place in different ways. The regulatory system gets captured by those that are supposed to be regulated because they are the designated experts who understand the system. In India the big corporate honchos in healthcare Devi Shetty, Naresh Trehan “ are the experts who are writing policy. Such experts often have dual loyalties, ie, to also represent the interests of those who are being regulated. Such issues of conflict of interest are further augmented by Revolving Door practices, where regulatory bodies include people who have had previous and recent stints in bodies that are the subject of regulation. Thus, for example, Naresh Dayal, ex-secretary, ministry of health and family welfare, retired on September 30, 2009, and soon after joined GlaxoSmithKline Consumer Health-care as a non-official director.

Capture also occurs through the promotion of ideas and in post-1990 India, the virtues of neoliberal reforms, including those of deregulation, are promoted by the Indian State. This has had significant impact on regulatory structures, as regulatory capture is more easily accomplished when the voice of those who benefit from lax regulation is significantly stronger than the general public whose interests are supposed to be safeguarded through regulatory structures and mechanisms. Reforms undertaken in India since the 1990s, have expanded the scope for private activity and reduced regulation and the nexus between the State and big business has strengthened. Regulatory capture has now morphed into what has been described as …an interlocking dynamic of policymakers, regulatory officials, corporate players and extremely sophisticated industrial lobby groups.

The change in trajectory of the State, which we describe above, applies as well to the role of the Indian government in institutionalising avenues for profit-making by private industry. In 2009, the Indian government launched a nationwide health insurance scheme called the Rashtriya Swasthya Bima Yojana (RSBY) designed to protect patients from the catastrophic impact of out-of pocket expenses incurred on hospital care “ as modeled on Andhra Pradesh’s Rajiv Arogyasri scheme. The RSBY has been held out as a major achievement by the Indian government both current and previous. It is this model that is now sought to be taken to the next level by Modicare.

Good health systems are like pyramids: the largest numbers can be treated at the primary level where people live and work, some would need to be referred to a secondary level such as a community health centre, and few would require specialised care in tertiary hospitals. Better primary and secondary level care ensures that fewer patients end up in more expensive specialty hospitals to undergo major procedures. The health insurance system in India inverts this pyramid and starves primary care facilities.

What is even more worrying is that these social health insurance schemes, largely implemented through partnerships with private providers, have been indicted in several states for defrauding the system. There have been several reports of unscrupulous private facilities milking these insurance schemes by conducting unnecessary procedures. Horrific incidents have been reported, for example, of unnecessary hysterectomies conducted on women as young as 22.

While it is relatively easy to identify corruption when, for example a public official receives a bribe to favour a private hospital, more fundamental instances of misuse of the power vested in the State to benefit private enterprises go unrecognised. Thus, for example, a change in policy to promote outsourcing of healthcare services has a system wide effect and involves a very large transfer of public assets into private hands. Yet we seldom recognise such an act as an act of corruption. While the Narendra Modi led government continues to claim that they are committed to providing a corruption free government, the economic model that it promotes with great fanfare is designed to promote corruption at an unprecedented scale. This is what underlies the stories of corruption in the health sector, which have become almost a daily occurrence.