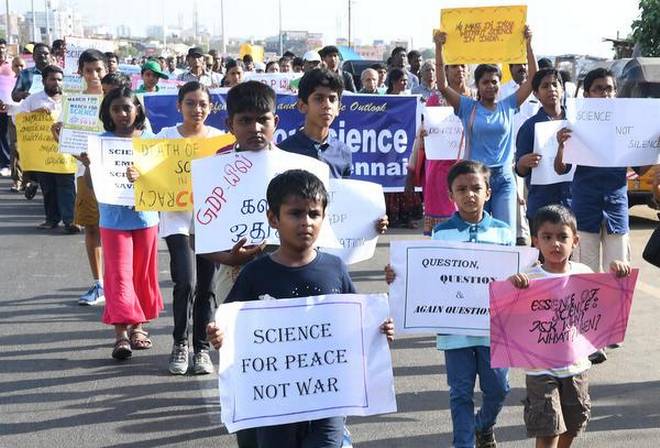 THIS year also, the Indian Science Congress held in Jalandhar, covered itself with shame; as it has been doing for the last few years. Venkataramanan Ramakrishnan, the Nobel Prize winning scientist, had called it a circus for discussing in Mumbai session of the science congress the irrational: ancient India had aircrafts, genetic engineering, etc. This tradition of celebrating mumbo jumbo as science from the Dinanath Batra School of Nonsense continues, with more and more outrageous claims being paraded each year in the science congress.

We should not be surprised, if a nobody, a K J Krishnan, supposedly an engineer with a degree on renewable energy, claims that he is superior to Einstein, Hawking, and Newton. Nor his belief that gravitational waves should be called “Narendra Modi waves”, and gravitational lens be called “Harsh Vardhan” lens. What is shocking is that a Vice Chancellor of the Andhra University, G N Rao, a chemist, should be talking about Kauravas being test-tube babies, Ravana having many kinds of aircrafts, etc. What is more condemnable is that this utter rubbish was spouted as science before children. They were both speaking in the ‘meet the scientists’ session of the Children Science Congress. Hopefully, the children have a more developed sense of critical reasoning then the speakers, and will reject views backed up by neither facts nor reasoning. We can still live with faulty reasoning, but what do we do when people claiming to be scientists, produce not only spurious theories but also spurious facts? The post-truth world entering the discourse of science under Modi government’s aegis!

K J Krishnan, the speaker of Modi waves, claims to be a senior research scientist at the World Community Service Centre at Aliyar in Tamil Nadu. Visiting the website of the world community centre, I learned that ascribing waves to various people – in this case Modi – is a hallmark of the centre; its founder, Vethathiri “Maharishi”, also has discovered “Vethathiri waves”. The centre teaches kundalini yoga, sells courses and other material, and like centres of many other religious “gurus”, is a business enterprise.

The question is not that there are fraud scientists and charlatans; the real issue is how does the biggest scientific gathering of the country host such nonsense? How has the culture of the science congress, set up as a part of the Indian national movement, supported by independent India as a bedrock of its belief as a modern nation, provide a pulpit to self-seeking charlatans? This is the question that a number of bodies of scientists and science activists have raised. Even the Principal Science Advisor  to the Prime Minister, K Vijayaraghavan, has come out asking that the chancellor file a formal complaint against the speaker G N Rao, the V C of Andhra University, and the science academies voice their opposition to this nonsense.

The All India Peoples Science Network, in its statement, pointed out:

“…mythology is being conflated with science, which is not only baseless and unscientific, but also undermines the real scientific/technological achievements of ancient India. It is particularly reprehensible that these unscientific ideas are being communicated in the Children’s Science Congress, to an audience of young minds and their teachers.”

“The assertions made at the Indian science congress by the prime minister in 2014 (Ganesha as symbol of plastic surgery), the Minister of Science and Technology  Harsh Vardhan in 2018 (claiming Stephen Hawking as saying mass energy equivalence is from vedas) and other invited speakers 2015 – Anand Bodas (aviation in ancient India); 2016 – Pandey (Shiva as environmentalist),  Sharma  (conch blowing health benefits), are against the spirit of the directive principles of the constitution regarding the need to inculcate scientific temper. Moreover the stated vision of the Indian Science Congress is “To inculcate scientific temper among the common people”

Stung by the public outcry and global derision, the Indian Science Congress Association passed resolutions seeking declarations from all invited speakers that they would not make any irrational and unscientific claims, and an advance summary of speeches from invited speakers. Steps in the right direction, but well after major damage  has already been done.

The Indian science congress is one among many of public institutions that have been devalued or destroyed by the Modi government. In the Germany of the thirties, a hundred scientists, all Nazi sympathisers, issued a statement condemning the theory of relativity as a Jewish plot. Einstein responded: if this were true, one scientist would have been enough. Science does not need defence; its validity cannot be denied or established through speeches or statements. But scientific institutions do. And unfortunately, the Indian science congress has damaged its standing and reputation with its allowing nonsense blessed by political power as science.