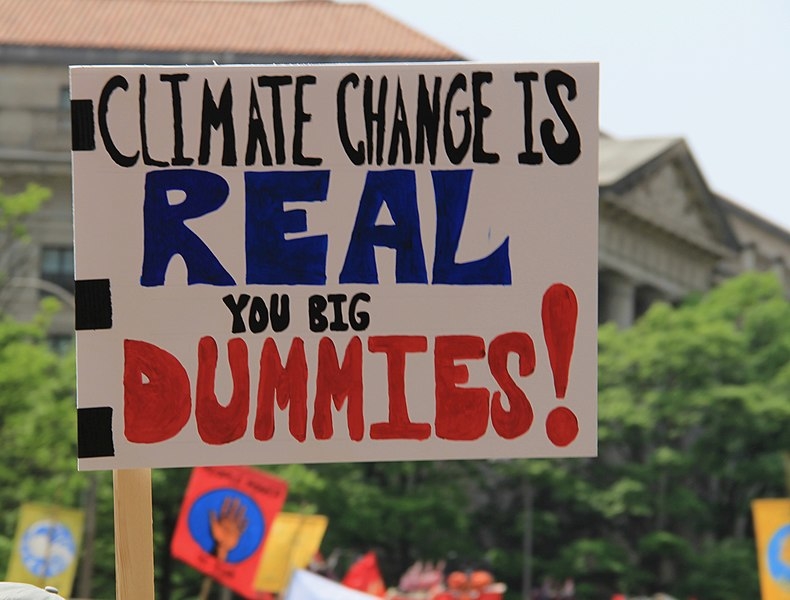 Most of those who led the charge against science explaining nature, are now surprised that climate-change deniers have stolen their theme song. Immersed in the assault on science, this group of thinkers simply overlooked the long term damage that they were doing to any issue on which scientific evidence would matter to society. If all that scientists say is based on merely groupthink, why should climate scientists groupthink be privileged over those of oil and coal companies? On what basis do we reject the groupthink that says that climate-change is manufactured to advance the career of climate scientists to get money from the public exchequer? Or the groupthink of experts hired by asbestos and tobacco companies that say that asbestos and tobacco are perfectly benign to human beings?

If scientific theories are just one narrative among many others, how come it actually predicts the velocity with which you will hit the ground if you jump out of a window, from say, the 32nd floor, even if you do not believe its calculations. If all narratives are valid narratives “ nothing but the groupthink of a set of people — how come this narrative “ when it comes to nature not only has explanatory power, but also predictive power that none of the other narratives have? And how come similar groupthink such as astrology fails, despite what the gullible may believe?

The danger of such a path becomes evident if we also look at the nonsense science of the Hindutva exponents: there was interplanetary travel in ancient times, we knew genetic engineering, etc. Is not their narrative as good as that of the historians of science? Are there alternate facts different from scientific facts? Are not both just social constructs or as we said groupthink of different kinds?

Finally, one major figure of the 90’s science wars “ Bruno Latour — concedes that the time has come for them to recognise that this indeed is a science war; or a war on science. In an interview in Science, he concedes, We are indeed at war. This war is run by a mix of big corporations and some scientists who deny climate change. They have a strong interest in the issue and a large influence on the population.

Latour’s 1979 book Laboratory Life: The Construction of Scientific Facts, written with UK sociologist Steve Woolgar, made him famous. His argument was that scientific facts are constructed by communities of scientists. This was what academics call a social-constructivist view of science. The danger of this view of science, in the post-truth world of today, is obvious.

This school of looking at theories as narratives is the hallmark of post modernism that swept cultural studies first, and then other academic disciplines. It prompted a backlash among scientists, who attacked post-modernism as the work of academic Leftists.

Alan Sokal, a physicist in New York University, and an old fashioned Leftist, was blissfully ignorant of post modernism. He was surprised by this attack on the Left, a Left that he could not recognise as Left. After reading up on the post modernist school and some of its theorists “ Lacan, Latour, Vandana Shiva, Ashish Nandy, etc., he wrote a spoof piece — adopting post-modernists jargon and quoting their high priests “ and submitted it to one of the leading journals of post modernist theory, Social Text. His article full of elementary scientific mistakes, and stating that quantum gravity was a social construct, was published by the journal. This is the famous Sokal Hoax, and is the academic equivalent of the Emperor has no clothes moment of post-modernism.

Latour, even then, had disassociated himself from others. He had said that Sokal’s prank exposed people who did not know science, but since he knew science, was exempt from this criticism.

Remembering that period of science wars, he said, Some of the critique was indeed ridiculous, and I was associated with that postmodern relativist stuff… I certainly was not antiscience, although I must admit it felt good to put scientists down a little. There was some juvenile enthusiasm in my style.

What may have started as a desire to put down the scientists a little, becomes a key problem if all knowledge of nature is regarded as   purely a subjective belief. If we accept all scientific facts are socially constructed, what is the difference between the post-truth universe, and the post modernist one?  Why can’t people construct own histories in line with their prejudices? Why can’t we have our own alternate facts?

It is one matter to say that funding distorts science, that power corrupts scientific research. This is what fossil fuel lobbies are doing “ supporting pseudo climate science.  But it is completely different to say that each group that has a shared reality, can construct their facts and their theories. The difference between a valid scientific theory, and other such shared beliefs, is that science can predict a phenomena that has not yet been registered, and explain it in terms of its theory. This is why gravitational waves, predicted by Einstein’s theory of relativity, are being verified today. This is the power that a scientific theory has that other shared narratives do not.

The problem of climate science is that its laws can only be established over a longer period, by which time civilisation as we know it, could disintegrate under rising global temperatures. Unlike physics, where we can separate nature from us, nature and our effects on nature have to be taken together, and over much longer periods.  And the consequences for fossil fuel companies is such that they are willing to sacrifice long term future of humanity for their short term desire for super profits.

It is a welcome sign that  Latour now sees the danger of creating a theory that declares that the validity of the scientific theory is immaterial to the research goals of Science and Technology Studies (STS), a position that makes no distinction between pseudo science and real science. His answer is, We will have to regain some of the authority of science. That is the complete opposite from where we started doing science studies. Now, scientists have to win back respect.

But the issue is not respect, but what is science? Is it rooted in a reality that lies outside us, or is it merely a consensus of the scientists. Even in this interview, Latour prefers to duck the question, saying irrespective of this, science needs to help policy making. If science has no special relevance to understanding nature, why should it then receive a special status in solving problems concerning nature?

The agreement that we would have with Latour, is that scientists can also be subverted to speak what the rich and powerful want. That is why we need a socially conscious scientific community, who can speak truth to power. Eroding the status of truth in science undermines this effort.

The scientific community has a social responsibility to use its knowledge in the interest of the people. This is the struggle among scientists, and in society. Not understanding an alternate reality, but in changing the current one.