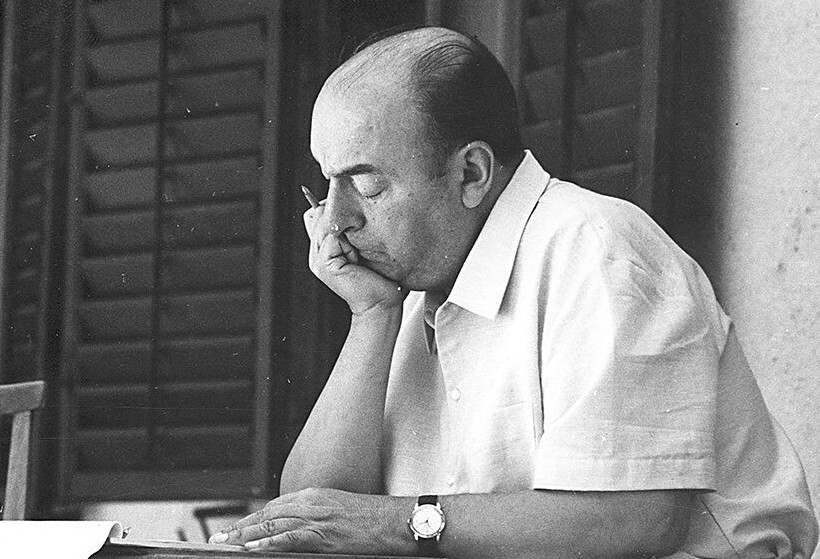 A group of experts assembled by the Chilean judge investigating Pablo Neruda’s possible assassination gave its verdict. The cause of death given in the death certificate is certainly wrong; he definitely did not die of prostate cancer. The international forensic team found an unexplained and a virulent strain of golden staph bacteria in his exhumed body as a probable cause. Neruda was certainly murdered by the Pinochet regime in the Santa Maria Clinic in Santiago, though more forensic work is required to determine the actual cause of death.

Neruda won the Nobel Prize in Literature in 1971. Gabriel Garcia Marquez called him “the greatest poet of the 20th century in any language”.

Neruda died 12 days after Pinochet’s bloody coup in 1973, which overthrew Salvador Allende’s democratically elected socialist government. More than 3,000 persons including President Allende, died in the coup that was hatched by the US, in collusion with the top brass of the Chilean military. Neruda had arranged with Mexico for asylum, and wanted join a group there for an international campaign against the overthrow of the Allende government. The US and the Pinochet regime did not want Neruda in exile, rallying international opinion; hence the direction to have him killed.

The question that remains is how did golden staph bacteria, normally found in hospital infections appear in Neruda’s body? Neruda had entered the Santa Maria clinic in Santiago a day before he was to leave Chile for Mexico. His former chauffeur and bodyguard, Manuel Araya had said that Neruda had an unexplained injection from somebody in the clinic, after which he felt sick. He died the same evening.

Chile’s Communist Party, of which Pablo Neruda was a Central Committee member, had filed for judicial investigations in 2011, and has been pursuing the case since then through the Chilean courts.

The Santa Maria Clinic was also the place where the former President Eduardo Frei Montalva was assassinated in 1982. Frei was murdered at the instance of Pinochet, by injecting him with low doses of mustard gas and thallium. Six people are currently on trial in Chile for this murder. According to Eduardo Contreras, the Communist Party’s lawyer, “The same doctors, and the same nurse of the same clinic where Frei Montalva was assassinated in the 1980s, were the ones who examined Pablo Neruda in 1973, in a clinic occupied by the military.”

The question remains how did the virulent strain of golden staph bacteria appear in Neruda’s body? Frei was killed in 1982 by the Chilean National Intelligence Agency the Direccion de Inteligencia Nacional or DINA which had the ability for producing chemical and biological weapons by then. DINA was involved in many more assassinations and attacks in Argentina, in the US and in Spain. Scant 12 days after the Pinochet coup, it is difficult to imagine they being in a position to use a biological weapon against Neruda. Here, the US and the CIA connections become important.

Sergio Draper was the doctor in charge of Neruda’s admission to the clinic. Dr Draper claims that the doctor who was left with Neruda, was called Dr Price. No record exists in the clinic of such a doctor. Some have suggested that Dr Price’s description matches that of Michael Townley, a CIA agent working with the Chilean intelligence authorities, and now living in the US under the Witness Protection of the US government. Townley was convicted of the assassination of former Chilean diplomat Orlando Letelier in Washington, on September 21, 1976, for which he served a 62 months sentence in an undisclosed prison after turning state’s witness.

DINA was the key Chilean agency involved in the assassinations carried out by Pinochet. DINA worked in close cooperation with the CIA and its larger Latin American and global network to carry out “hits” even outside Chile. What is significant was its tie-up with Cuban exiles, Spanish and Italian figures, all of whom had created a destructive trail of murders, bombings and mayhem around the world. What united all these figures and the DINA, was their connection to the CIA.

Some of the DINA’s killings in which CIA figures were involved, are Carmelo Soria, a 54-year-old Spanish diplomat, who was working for the UN in Chile, the attempted murder in Italy of Bernardo Leighton, a Chilean Christian Democrat living in exile, the assassination of Carlos Pratts, a Chilean general and his wife living in exile in Argentina. All of these were the joint operations of DINA and the CIA, with Townley being a key figure in the assassinations.

One of the tasks of the DINA was to build chemical and biological weapons capability. Eduardo Barrios in DINA was in charge of these operations, and worked closely with Townley.Â  DINA was implicated in the assassination of the former President Frei, where thallium and mustard gas was used to weaken his immune system, in the same Santa Maria Clinic, where Neruda was assassinated. Barrios was killed later to protect Pinochet, when he came under international judicial scrutiny for crimes against humanity.

DINA and CIA were also a part of Operation Condor. A US Department of State document (published by the non-profit National Security Archives) identified Argentina, Brazil, Bolivia, Chile, Paraguay and Uruguay as the countries that “…have established Operation Condor to find and kill terrorists “¦ in their own countries and in Europe.” ¦ (T)hey are joining forces to eradicate “˜subversion’, a word which increasingly translates into non-violent dissent from the left and center left…Their definition of subversion, according to the document, was so broad as to include nearly anyone who opposes government policy.”

Operation Condor was also involved in the infamous Cocaine Coup in Bolivia in July 1980. Not only the CIA, but also the Drug Enforcement Directorate (DEA) of the US helped well-known drug cartel “leaders”, under prosecution in the US, to enter Bolivia for the coup. Among the other “luminaries” in the coup was Klaus Barbie, the Nazi war criminal. DEA’s involvement in the cocaine coup was the reason why Evo Morales, after being elected president, threw them out of Bolivia.

While it is possible that Neruda’s assassin was Townley, it is also possible that he was murdered by another US operative from either the CIA or the US Military intelligence. The US military was much more likely to have had weaponised golden staph bacteria then, and not Chile’s DINA. The assassination of Neruda was clearly a joint Chile-US operation. Neither Pinochet nor the US wanted international resistance to gather around Neruda in Mexico. There is enough evidence to show that the CIA, the US military and the US government did not just support the military coup, they were fully involved in its actual execution as well.

Kissinger and Nixon thought that Allende’s Chile could become an example in Latin America, as his “‘model’ effect can be insidious.” Soon after Allende’s inauguration, Kissinger, in his eight-page briefing paper dated November 4, 1970, wrote, “The example of a successful elected Marxist government in Chile would surely have an impact on and even precedent value for other parts of the world, especially in Italy; the imitative spread of similar phenomena elsewhere would in turn significantly affect the world balance and our own position in it.” Peter Kornbluth, the director of National Security Archives Chile Documentation Project, notes that the next day, Nixon made it clear to the entire National Security Council that the US policy would be to bring Allende down. “Our main concern,” Nixon stated, “is the prospect that he can consolidate himself and the picture projected to the world will be his success.”

The one million documents released by the CIA have documented the US and CIA’s involvement in the Indonesian coup that killed a million communists and their sympathisers. The US has orchestrated many such killings in Guatemala in 1954, Iraq in 1963, in Chile in 1973; and many many others. It ran a spider web of killings, massacres and subversion around the world.Â  Its invasions and regime change activities continue, with threats of war and nuclear annihilation. The past has not been buried; it still is still very much living today.

Neruda’s murder and our hunt for truth, is very much a part of calling the US to account. Neruda’s poetry still stands as an indictment of the US, and its bloody history. Even from the grave.