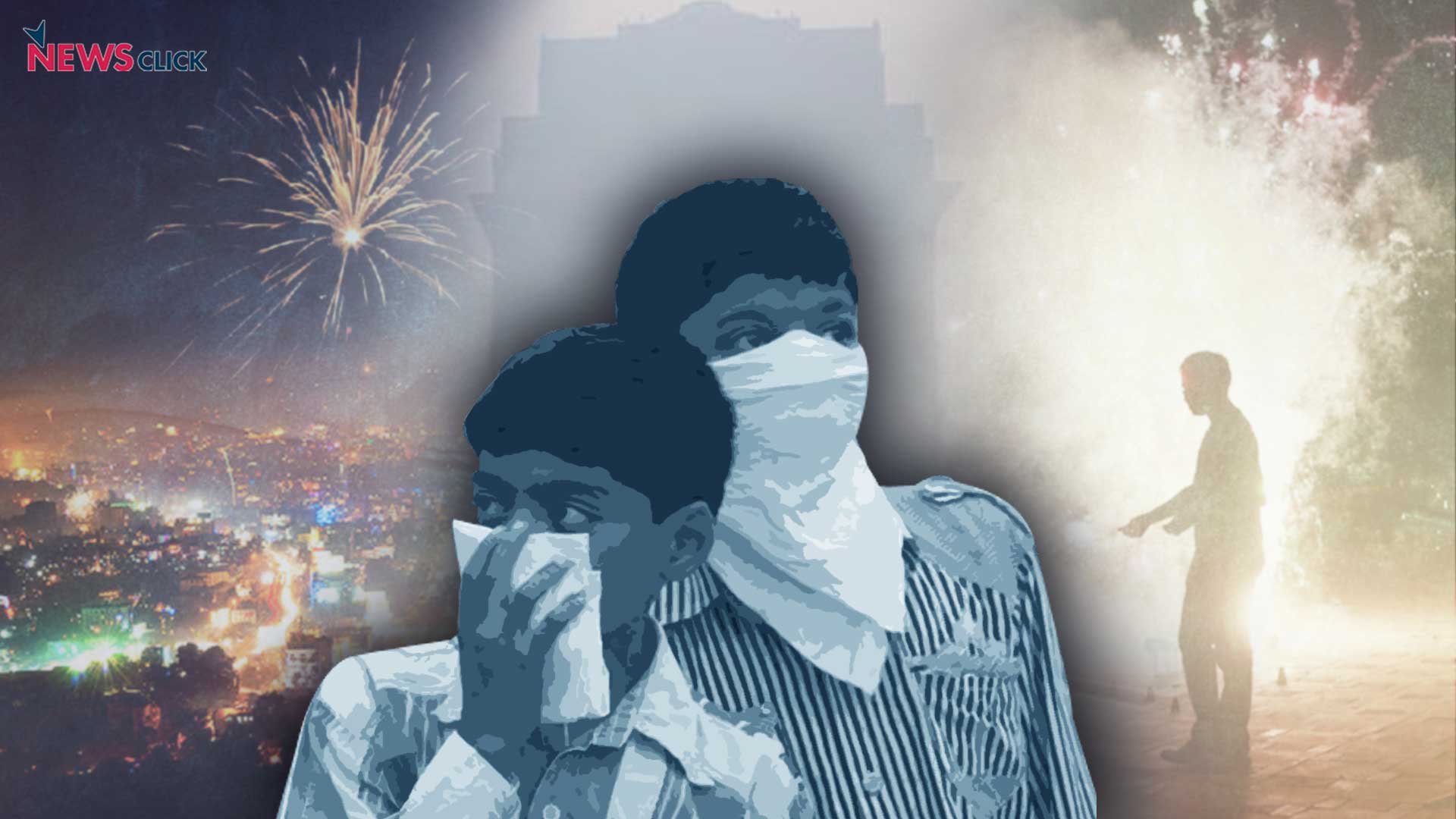 It is that dreaded time of year again for Delhi and the National Capital Region (NCR), the season of high air pollution, in which Delhi regularly ranks worst in the world.

Diwali has passed, and the Supreme Court had imposed a total ban on firecrackers, a once unimaginable prohibition, but one that has apparently been greeted with stoicism by citizens and government authorities, who are only too familiar with the choking pall that envelops the megalopolis for several days after the festival of lights. Diwali was early this year, but other sources of pollution that plague the city and neighbouring regions every winter are looming large.

Among these major problems is the seasonal burning of crop residues, especially paddy straw, by farmers in their fields, notably in neighbouring Punjab and Haryana, mostly in the former. This causes the release of enormous quantities of particulate matter, especially the dangerous PM2.5, along with other noxious gases. The cold winter air and absence of significant winds keep this smog of pollutants close to the ground, preventing their dispersal and posing even more severe health problems than usual.

Last winter, anticipating the coming smog season, the National Green Tribunal (NGT) had prohibited the practice in Delhi, Punjab, Haryana, Rajasthan and UP, and is now closely monitoring the enforcement of the ban by the states concerned. But measures being taken to enforce the regulation, in particular, the imposition of punitive measures, have infuriated farmers who, given the absence of viable options, have been openly violating the ban orders and are even preparing to physically resist enforcement efforts.

While authorities in Punjab have been sounding optimistic about making significant impact on the problem, indications are that efforts to minimize air pollution from burning of crop residues may not amount to much given structural problems in the agriculture sector in Punjab, and the paucity of effective measures to deal with crop residues in a manner that incentivizes farmers not to burn it in situ. And if endeavours to reduce air pollution in Delhi and NCR are limited to piecemeal reactive measures rather than long-term pro-active steps to tackle the many and varied pollution sources, then this winter and the much more to come in the near future, may not be much better than last year.

Burning of paddy stubble in Punjab is a relatively new problem. Paddy cultivation itself is of quite a recent vintage in Punjab dating to the Green Revolution in the “˜70s. At that time, paddy was mostly manually harvested and the stubble left over would mostly be ploughed back into the fields and act as organic fertilizer. However, by the mid-“˜80s or thereabouts and increased mechanization of agriculture in Punjab, the use of combine harvesters had become widespread, left the stubble about a foot long. Ploughing this back into the soil was difficult, uprooting or otherwise cutting and collecting it was labour intensive and increasingly expensive. The easiest and cheapest method for farmers was to burn it in the field itself.

The burning of stubble has been captured vividly by NASA, notably since 2015, whose satellite photographs showed a dense cluster of red spots among a brown coloured region of agricultural fields.

Most of the stubble burning takes place over three weeks in October-November, releasing particulates and smog-forming carbon monoxide and nitrogen oxide, which drift from the fields over almost the entire Indo-Gangetic plain. This pollution contributes around 12-60 percent of particulate concentrations depending on the generation of other pollutants in different locations, winds, temperature and other local factors. Farmers themselves are doubly harmed, by the local air pollution caused, and by the loss of soil nutrients such as nitrogen, potassium, phosphorous and sulphur due to the burning.

Yet farmers in the Punjab feel they have no viable alternatives because neither state governments nor the central government has taken sufficient and effective measures that would provide incentives to farmers to stop stubble burning and switch to other measures to handle the paddy stubble in the fields. Instead, governments have merely resorted to punitive measures such as fines and even coercive action such as raids by police parties and pollution control officials. This is, understandably, proving to be wholly counter-productive and has only served to alienate and anger farmers who are already reeling under input costs and produce price pressures, and a shortage of (mostly migrant) labour. The high cost of machines, that would only be used for a very short period, to remove, otherwise handle or plough back the stubble augmenting soil organic matter, is another major deterrent.

Punjab generates 19.7 million tones of paddy straw on about 30 lakhÂ hectares of agricultural land each year. Of this, only 4.3 million tones (roughly 22 percent) is used in biomass-based power plants, cardboard units and as fodder.

Farmers demand to be provided financial assistance, either in the form of an add-on to the procurement price or a direct cash subsidy to help offset costs. Farmers’ organizations are calling for Rs.100-200 per quintal of paddy to be added to the procurement price, or a provision of Rs.4000-5000 per acre to defray expenses. The Punjab government has been speaking in many voices, on the one hand seemingly sympathizing with the farmers but on the other pleading helplessness as regards financial provisioning for which it is seeking from the central government which has so far turned a deaf ear.

There are many options for handling and utilization of paddy straw stubble, but each of them involves not merely technologies, which are available, but appropriate financing and institutional mechanisms.

Among the more straightforward is in situ management of the stubble, an approach strongly advocated by the Punjab Pollution Control Board. One approach is to plough the stubble back into the ground, which would save on inorganic fertilizers and add to soil organic content. But doing this manually is impossible and mechanized options are expensive, especially for just a few days in the year. Another option is the tractor-mounted “Happy Seeder” machine developed by Punjab Agricultural University, which adopts a no-tillage system to cut the stubble close to the ground and collects it, sows wheat seeds for the next crop, and spreads the cut straw on the field as mulch. But the problem is the Rs.1.5 lakh cost of the machine, notwithstanding the 33 percent subsidy available for its purchase. No system currently exists enabling farmers to hire any of the equipment required for in situ stubble management, and the economics simply do not provide a viable option for farmers. Some commentators have suggested that farmers’ cooperatives or unions could be utilized to house such equipment in clusters and hire them out to farmers, but no such institutional mechanism has been worked out.

Could the stubble be cut, baled if necessary and made available to power plants or cardboard factories? Certainly, it can be and is being done in some districts in Punjab. But again, there is no institutionalized system to involve a maximum number of farmers, establish the supply chain and accomplish the task in such a manner as provides some incentive to the farmers in the form of cash benefits from the sale of, while also making the system viable for the plant operators. A fairly good incentive structure is in place at least for biomass-based power plants, with a tariff of Rs.8.17 per Unit having been announced by the Central Electricity Regulatory Commission. However, only about 1 million tones of straw are used in Punjab in this manner, and Haryana has not set up a single plant yet. This needs to be urgently scaled up to cover the concerned States. Punjab has also recently supported a private player to set up a Rs.1000 paper plant using paddy straw as a feedstock, but again this is a drop in the ocean. Punjab and Haryana also provide subsidies for requisite farm machinery, but to a very limited number of farmers, each year compared to the scale needed.

There is clearly a missing link in all this. To think that leaving such arrangements to market forces and hoping that some minor subsidies or financial incentives would be enough is a pipedream. For instance, the Punjab Pollution Control Board estimates that ploughing the stubble back into the soil or spreading it as mulch would cost Rs.700 extra for labour, but save on fertilizers to the tune of Rs.1000 per acre and increase productivity by 1 quintal per acre yielding a benefit of Rs.1600 per year. But estimates of costs by farmers’ organizations are very different, amounting to around four to five thousand per acre. And studies have shown that productivity increases, savings on fertilizers and yield benefits are marginal at least in the short term. The Pollution Board has claimed all these measures will reduce the numbers of farmers burning stubble this year from 12 lakhs to 1 lakh. Highly doubtful!

The State governments, aided by the central government, require to develop a robust system of adequate financial incentives, either as add-on to procurement price or as direct subsidy for the purpose, and also establish a sound institutional mechanism and outreach system to establish the supply chain from farm to factory or make available requisite farm machinery for in situ stubble management. Nothing short of this will suffice.

NGT is holding its next hearing on October 30 and is pressing the Punjab and Haryana governments to show evidence on how it is helping the farmers deal with the problem, but also urging them to take punitive and enforcement actions. In response, the Punjab government is said to be preparing a list of actions it has taken and is cajoling, coaxing and even coercing villagers of a selected “pilot village” to present testimonies before the Court. What the NGT will decide is anybody’s guess. But the winter pollution in Delhi and elsewhere is not caused by crop residue burning alone, but also and more so by vehicles, especially private vehicles of which there are now more than 10 million in Delhi alone, by road dust including from unpaved surfaces, construction dust and so on. If personal vehicles ply happily, municipal corporations and urban authorities continue to ignore road dust, real estate magnates mint money while polluting the air, all without facing any punitive action, why are hapless farmers being singled out for fines and police action? They need to be assisted to tackle the problem, and State agencies must come forward to extend all possible assistance including taking pro-active measures including financial and institutional measures. NGT should proceed sympathetically in this regard. Farmers are not the culprits here.