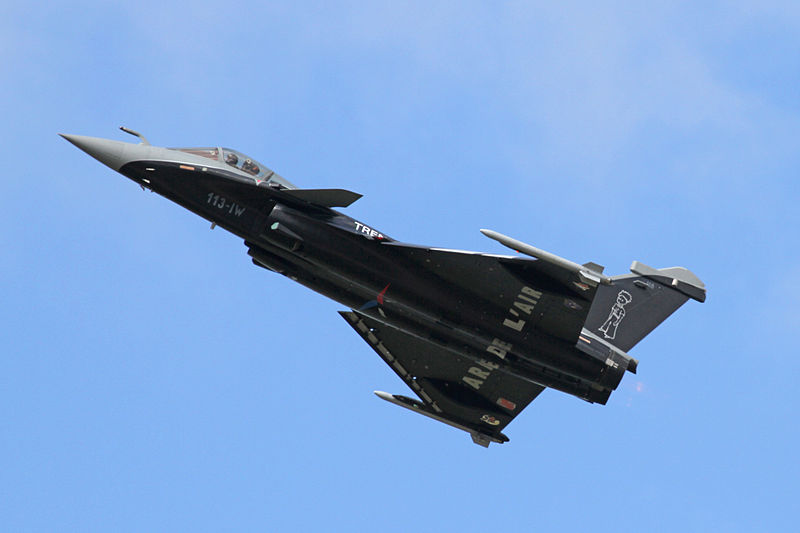 Many questions are swirling around the Rafale fighter aircraft deal especially in these politically charged times with various state elections already held or around the corner. There are even dark hints about skeletons in the cupboards. It is not the purpose of this column, and indeed beyond its capability with the information presently available in the public domain, to comment on possible skullduggery.

However, there are undoubtedly many problematic issues raised by the Rafale deal as it now stands, as regards both its contours and the procedure adopted to get there. These pose serious problems on several counts: for the capabilities of the Indian Air Force (IAF), for self-reliance in military and related advanced technologies, and for transparency and a long-term perspective for acquisition of defence hardware for the user services.

Regrettably, these issues were brushed aside by defence minister Nirmala Sitharaman at a press conference last week. She claimed that PM Modi’s government had acted decisively in striking a government-to-government deal with France for 36 Rafale fighters after the tender process for 126 fighters got mired in differences over price and technology transfer. She underlined that this was in response to the IAF ‘s pressing needs, in contrast to the indefinite delays under the UPA, and had been done following transparent procedures. She further stated that since the order was limited to only 36 aircraft, there could be no technology transfer, perhaps the first time this was being openly admitted by any government spokesperson. These arguments may pass muster as partisan repartee to comments made by some opposition leaders but, in substance, the raksha mantri was sadly mistaken in her assessment.

The decision to buy a small lot of 36 twin-engined Rafales, just two squadrons worth, instead of the fleet of 126 fighters or 7 squadrons originally decided on for the MMRCA (medium multi-role combat aircraft) acquisition is peculiar to say the least.  Given the IAF ‘s severely depleted squadron strength, now effectively at around 31 compared to the desired and approved 42 by the middle of the next decade, this can at best be described as a short-term, fire-fighting measure while holding back on some expenditure.

It was, after all, after much conceptualisation of desired force levels, mix of aircraft types for different envisaged roles, and strategic planning by the IAF, aided by presumably competent planners, bureaucrats and political leaders, that the requirement of 126 MMRCA was arrived at, after taking into account current and foreseeable squadron strength and likely costs. Does decisive action mean that all this strategic planning was simply set aside by the political leadership one fine day?

Nobody has till date explained the rationale behind the decision with respect to the parameters considered for the original decision. This assumes even greater significance in view of the fact that different high-ranking IAF spokesmen have repeatedly opined that these 36 aircraft are not adequate. An elaborate procurement procedure, although criticised by many for being over-bureaucratic and rigid, had been crafted and put in place precisely in order to render processes more rule-bound and transparent, and to avoid the recurrent charges of opacity, arbitrariness or even corruption in decision-making, whether by user services, the bureaucracy or the political leadership. The apparently sudden and whimsical decision by the political leadership to abruptly cancel the MMRCA tender and strike a government-to-government deal for 36 Rafales is precisely the kind of opaque decision-making that the procurement procedures were meant to avoid. If the government does not want all manners of allegations to swirl around the Rafale deal, it should explain how due process was followed as raksha mantri averred.

As regards substance, even with the induction of the indigenous Tejas Light Combat Aircraft (LCA), which is not a replacement for the deep penetration, long endurance strike role played by the Rafale, this leaves a huge gap in the IAF ‘s squadron strength and capability. The decisive action does not at all address this long-term issue. Sooner or later the IAF will either require more Rafales or more of some other comparable aircraft. The latter clearly does not make sense in view of the extensive comparative evaluation and field trials of the different MMCRA contenders. It will also increase the multiplicity of aircraft types in the IAF inventory, already a major problem, further complicating the task of personnel training, servicing and repairs, which would be a major impediment in times of conflict.

On the other hand, if more Rafales are eventually to be acquired, then a revised acquisition methodology must again be worked out. But will the repeat order also be for aircraft in fly-away condition? If the small lot order for 36 aircraft obviated technology transfer, then an additional small lot order would follow the same pattern, which would not have been the case if a larger order had been placed in the first instance. Raksha mantri did not provide information at her press conference on the cost per aircraft negotiated, while UPA spokespersons have claimed that costs are more than double those envisaged in the earlier tender process. But it stands to reason that buying outright with provision for spares, maintenance over aircraft life-cycle etc is likely to involve higher costs than indigenous manufacture and servicing. Evidently, the order for 36 Rafale fighters raises more questions than it provides answers.

Any armed service would recognise the value of having indigenous hardware and technological capability, particularly in times of conflict. Such self-reliance is an invaluable asset in military terms. It also has huge significance for the depth and capability of its domestic industrial base as regards advanced technologies in a wide range of fields covering manufacturing and precision engineering, materials, electronics and avionics, missiles and other armaments. The original tender for 126 MMRCA would have facilitated these to a considerable extent since transfer of technology was envisaged as a key component of the acquisition.

In the acquisition as presently structured, there is to be no technology transfer as admitted by Raksha mantri herself. Yet the offset requirements mean that 50 per cent of the deal value has to be expended within India itself. Dassault has selected Anil Ambani’s Ambani Aerospace as its partner in India and has signed an MoU forming a joint venture for the purpose. The implications of this are serious, and need to be understood.

The Ambani conglomerate has no experience in aerospace, or even in manufacturing. So even if technology transfer were to have taken place, the Indian private sector entity has no capacity to absorb the technology. With Dassault having taken the responsibility for supply of 36 aircraft in fly-away condition, and raksha mantri clarifying that this left no scope for technology transfer, the Dassault-Ambani JV have agreed to make components and possibly over time assemble Dassault’s Falcon executive jet in India to offset the 50 per cent amount of the Rafale deal.

This defeats the very purpose of offsets which are meant, as in several other countries that have adopted this method, to build and enhance technological capability in the acquired hardware. Even in assembly or sub-assembly of the Falcon the Advani entity, with no capability of its own, would end up playing a junior screwdriver role resulting in marginal absorption of know-how within the Indian manufacturing ecosystem. Once again, raksha mantri’s statement that the government has nothing to do with an agreement between two private entities is disingenuous. The Rafale is a government-to-government deal and surely India’s government has a say on how it should be executed. Also, the defence procurement procedure states that government would identify potential strategic partners, so why should this exclude public sector entities and why should this not apply to government-to-government deals as well?

Possibly in order to explain away the absence of any transfer of technology, in itself inexplicable at this stage of India’s development and given its industrial base and capability in aviation, an astonishing campaign has been unleashed in India, with very dangerous portents.

First, Dassault has assiduously set out to spread a view that the public sector Hindustan Aeronautics ltd (HAL), India’s premier aviation manufacturer, does not have the capability to absorb any technology transfer and lacks the ability to delivery quality aircraft. Dassault has even claimed that it visited HAL ‘s Nashik facility where the Su-30MKI is made in collaboration with the Russian Sukhoi company, and that it revealed the sorry state of affairs in HAL. If true, that the government should have facilitated a French team to visit a Russian-collaboration military facility, is itself extraordinary. Even F-16 manufacturer Lockheed Martin has been cited as saying that technology transfer to HAL would not yield results. This is rich coming from a company that has signed up for collaboration with the Tatas, also with almost no experience in aviation manufacturing, for making F-16s in India with technology transfer!

This chorus is reminiscent of the technology denial and neo-colonial denigration of Indian technological capabilities practiced by the West in the 1950s and 60s. To hear this in the 22nd century is astounding. It especially jars coming from Dassault which, when it was conducting a PR campaign in India during the MMRCA tender process, spoke glowingly about the serial collaborations it had with India, more specifically with HAL, ever since the 50s involving military aircraft such as the Mystere and the Mirage. If HAL does not have the capacity to absorb technologies, nobody else does, certainly not entities making a fresh entry into the complex and sophisticated aviation technology space.

All this is clearly orchestrated to undermine HAL, the only Indian entity that can effectively collaborate with foreign aviation majors and eventually develop capabilities to possibly even replace them at least in the Indian market. Championing fresh entrants such as Ambani or Tatas suits these Western armaments majors as the former pose no threat to them, and will happily accept a junior partner screwdriver role so long as it fetches them some easy earnings.

Very unfortunately, and with curious timing, a so-called report written by some section within the IAF and submitted to the government is being extensively quoted by sections of the press to the effect that the Tejas LCA is a sub-standard fighter that cannot meet the IAF ‘s requirements, which is simultaneously an indictment of HAL which is manufacturing the LCA. Is this designed to build the ground for an F-16 acquisition, perhaps through a government-to-government order as with the Rafale?

For all the criticisms of the LCA, including delays and tardy achievement of performance targets, various experts including top-ranking IAF officers have testified to its high-performance capabilities even in its current Mk1 version. The LCA is in the first stage of its development as a platform, with two significantly upgraded successor stages around the corner, whereas comparable aircraft such as the F-16 have gone through over thirty years of upgradation before reaching their contemporary capabilities. Whatever the past difficulties, this is the time to invest in the LCA platform and develop it to its maximum potential which all attest to. This will pay heavy dividends to the Indian military in the long run, and to the indigenous industrial base. HAL can always bring in private sector partners to augment production capacities, much like ISRO and BARC have done in the space and nuclear energy fields. All acquisitions from abroad should have technology transfer components that feed into the LCA programme in terms of technologies and capabilities, and offsets should be carefully envisaged and planned towards this end.

It is deeply regrettable that some sections of the IAF seem to persist with undermining HAL and indigenous capabilities, perhaps with the erroneous and outdated understanding that military equipment from Western manufacturers are, and would always be, superior to indigenous ones.

It is even more shocking that this orchestrated campaign has not been countered by the government, giving rise to concerns that it may indeed be tacitly agreeing with such views.