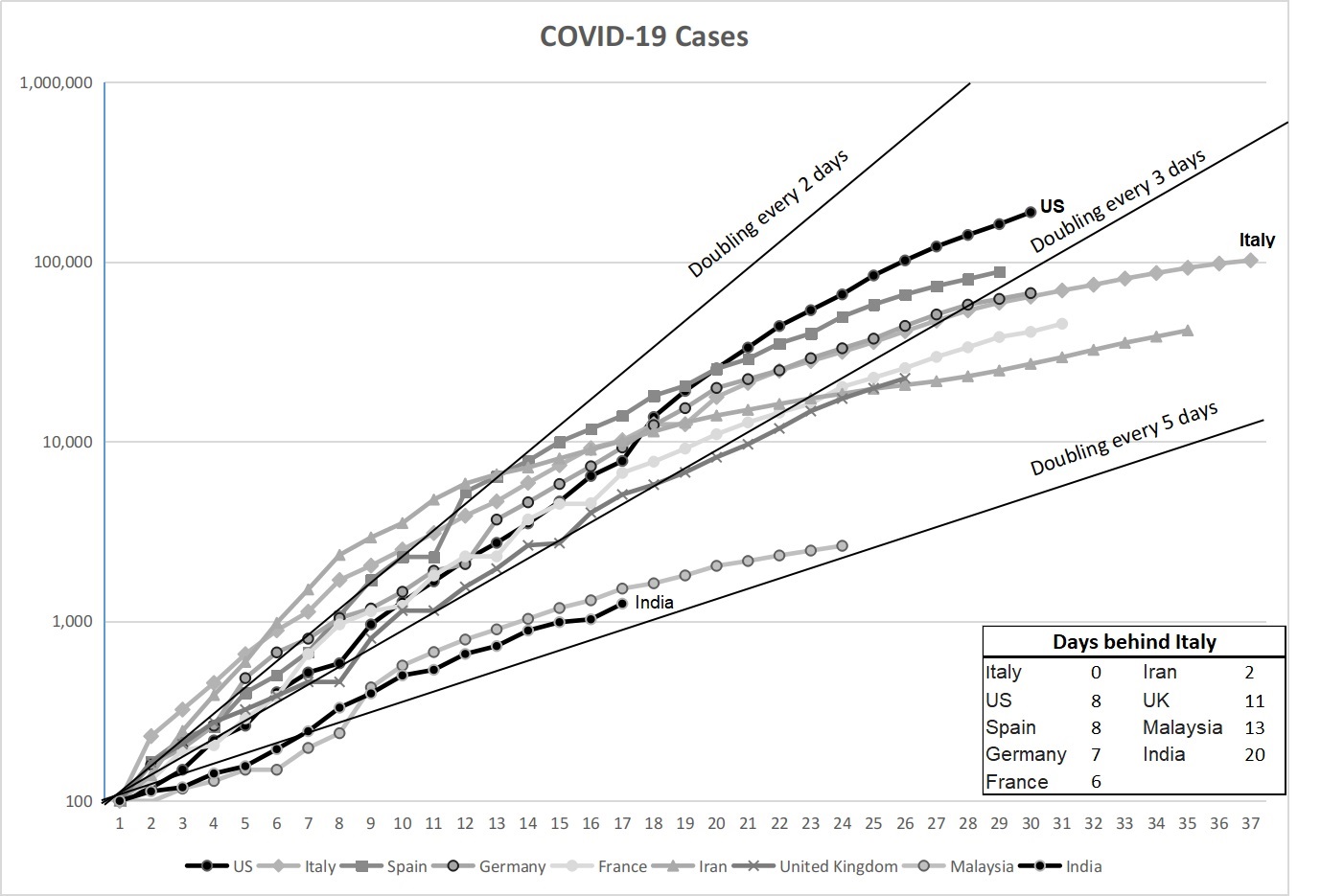 AS I write this column (April 2), Covid-19 is crossing a million infected cases in the world and nearly 50,000 dead. In India, the total infected cases are more than 2,000, with 51 deaths. It is clear that all countries are affected. It is a matter of time before a set of clusters or hot spots form and Covid-19 takes off in the country. Once it takes off, we are in exponential growth with a doubling rate that very soon makes the numbers look frightening. This is where Wuhan was six weeks ago, Italy entered about 3-4 weeks back and the US is in now. By our calculations, and assuming that India’s figures reflect reality and not its lack of testing, India is about three weeks behind the US. We are all on the same trajectory, give or take a few weeks!

If we do not look at just the current figures that show a large variation, but look instead at how the disease progresses once it reaches a figure of hundred infected in a country. This is a chart that is now quite popular. This chart shows that all countries are doubling the number of infected within 3-5 days. It is just that the epidemic has travelled to some countries ahead of others. For the tropical countries (hotter and with higher absolute humidity), even a slightly lower rate of transmission will not significantly alter the end outcome.

A doubling rate every 3-5 days means an exponential growth of the epidemic.  As I have explained in an earlier column, most people do not grasp the speed with which an epidemic can take off, once it has reached a certain number. A doubling rate of four days, which is where we probably are now, will see the 2,000 cases we have currently, reach 10,000 by next week, and nearly 50,000 within two weeks from now.

This brings us down to the lockdown and the impact it is likely to have on the spread of the epidemic. There is no doubt that the Modi government botched the lockdown completely. There was no preparation, no communication to the state chief ministers, no plans to see how the impact on the most vulnerable sections could be reduced, not even a thought that Indian towns and cities have a large migrant worker population. And the talk of physical distancing in crowded clusters where the bulk of the urban population lives, is not even feasible. For them, the alternative was to either stay and starve, or make the perilous trek back to their villages.

The tragedy of migrant families walking hundreds of kilometres to their villages is now there for all to see. As they are saying, the coronavirus may kill us, but if we stay without food, hunger surely will. Why didn’t the government see that this would happen? Did the government and its officials – including the PM – completely forget the poor while planning the lockdown policy?

The PM had nothing to offer to migrants except his apologies. No talk of opening the Food Corporation of India’s godowns for the people, no immediate help to the state governments to address the crisis they are facing from the unplanned lockdown imposed by the centre. Instead, instructions have been issued to the district administration under the Disaster Management Act to stop all movement of migrants, and media threatened with consequences if they report news without verifying it with the government.

Yes, a successful lockdown would have helped snap the chain of transmission and slowed down the spread of the novel coronavirus or SARS-Cov-2. This might have bought us some time. So what are the consequences now of the botched lockdown?

One immediate consequence is that the large scale movement of the people makes contact tracing and physical isolation almost impossible for the large numbers that have left urban areas. If there are a significant number of infected among them, this will lead to many more hot spots across the country. If number of such new hot spots are not many, and the lockdown can be maintained after this week, we will have partially broken the transmission links. Not as much as slowing down as we had hoped initially, but still some significant slowing down.

If we model what is likely to happen, we are still going to see increase in infection rates, and a peak probably within the next two-three months. If we want to slow down the spread of the virus and allow the hospital system to address those who are likely to need hospitalisation and intensive care, the next 4-6 weeks are vital.

In these next few weeks, India’s testing strategy has to change urgently and significantly. We need to know the situation on the ground to fight the epidemic. Are the numbers 2,000 because our testing figures are so low? Or are these real figures?

Tedros Adhanom Ghebreyesus, director-general, WHO, said in his press conference (March- 16): “You cannot fight a fire blindfolded” he said, underscoring the importance of testing every single case. “We cannot stop this pandemic if we don’t know who is infected. We have a simple message for all countries: test, test, test.”

Instead, we are fighting a fire with our eyes closed. In spite of our knowing that a pandemic was in the offing, ICMR procured a very limited number of kits and still appears to have low testing capacity. Going by the latest figures (PTI, April 1), 47, 951 tests have been done. This puts the daily rate of testing at about 6,000 tests per day, which is about 35-40 per cent of our testing capacity. With these numbers, India’s testing figures per million population is still one of the lowest in the world. Compare this to South Korea, which tested 250,000 people within three weeks –  February 21 to March 14, that too, with a population that is less than 5 per cent of our population.

Without creating an appropriate testing capacity, even after having clear warning, the ICMR has combined opacity on what it is planning with a lack of preparation. We are now hearing about procuring lakhs of kits, giving manufacturing clearance to Indian manufacturers. Why now? The situation of testing on the ground is far behind our requirements. We need to ramp our testing capacity by orders of magnitude to just stay on our feet in the coming days.

ICMR and ministry of health and family planning has introduced a term called limited community transmission, which is a kind of neither fowl nor fish! What it means for testing is that ICMR’s rules – and ICMR still controls the entire testing infrastructure in India – prevents large scale testing. Only a limited number of cases can be tested under ICMR’s guidelines. And the guidelines are like typical governmentese, it seeks more to confuse than allow for testing.

The facts on the ground are clear: we are already in a community transmission phase, where lockdowns have to be followed by extensive testing, isolating those infected in special makeshift hospitals, makeshifts created for those not seriously ill, and reserving the existing hospitals for providing critical care.

How prepared are we with N95 masks, gloves, full body protective suits and face masks for hospital staff? In the first phase of the infection in Wuhan, fully 3,000 medical personnel became infected. In the next phase, including the 42,000 medical personnel that came from outside the province, not a single one fell sick. The difference was entirely due to protective gear. Instead, we have reports from hospitals of a dire shortage of protective gear for frontline health workers.

After President Trump’s phone call to President Xi, the US dispatched 22 flights to China to airlift its vital medical supplies. China is the only country that has the requisite capacity to manufacture the N95 masks (the ones medical staff require for handling such infectious diseases) and other protective gear in sufficient quantities. Will PM Modi pick up the phone and call Xi as Trump has done and ask for emergency supply of test kits and protective gear which are globally in short supply? Of which we are now in dire need?