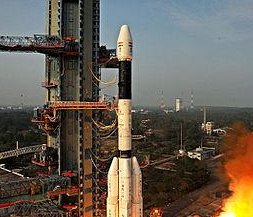 Scientists and engineers at ISRO, and people all over India, heaved a huge sigh of relief and cheered loudly, at the successful launch on January 5 of the GSLV D5 rocket with an indigenous cryogenic engine and the accurate insertion of the 2 tonne GSAT-14 satellite into geo-synchronous orbit. The notes of triumph and release from tension were palpable at Sriharikota, and the ISRO team would be forgiven for any hyperbole that might have crept into their self-congratulatory speeches.

This was a moment that ISRO and the nation had long been waiting for. There was a lot riding on a successful mission, and failure would have seriously lowered morale among India’s space scientists and engineers, and maybe even eroded public support for India’s space programme.

The successful GSLV launch with indigenous engine has boosted India into the small club of nations with serious launch capabilities. As the cliché goes, it is such capabilities that separate the men from the boys. With GSLV D5 and GSAT-14, India’s space programme has truly come of age.

India’s space programme has undoubtedly had many significant achievements, and has seen its polar Satellite Launch Vehicle (PSLV) develop into a proven work horse with 23 successive successful launches, including the Chandrayan and Mangalyan missions. But scientists and engineers throughout the world, and especially in all space-faring nations and agencies, know well that the PSLV has limited capability in terms of the size of satellites it can put into earth orbit and the height of this orbit above the earth which is crucial to the role such satellites can play.

Capability to launch heavier satellites into high orbit — and ISRO plans to further upgrade the GSLV to enable launch of 4 tonne plus payloads — also implies the ability to undertake serious inter-planetary missions. Regular readers of these columns will recall our sharp criticism of the Chandrayan and Mangalyan missions using the PSLV for being clever “trick shot” missions, using highly elliptical orbits to fling the tiny satellites towards their targets in a slingshot manoeuvre, more to claim success in the lay public’s eye than for any substantive scientific or technological achievement. Now, after GSLV D5, subsequent missions to the Moon or to Mars can be undertaken with greater seriousness and with more meaningful experiments on board larger craft.

The GSLV rocket, including its forthcoming upgraded versions, will also have major positive impact on India’s ability to launch communication satellites both for itself and for others, earning good money for ISRO and reducing fund outflows on commercial launches for India by others such as by the European Space Agency.

Success after many tries The success of GSLV D5 would have tasted all the sweeter to the ISRO team given the train of bitter failures in the long and arduous struggle to master such heavy launch capability with an indigenous engine in the face of a technology denial regime driven by the US.

The first of the GSLV series of rockets, designed to place larger satellites in geo-synchronous orbits, was flown in 2001 after a highly chequered early development phase that started in 1991 when India entered into an agreement with the Russian space agency Glavkosmos to procure cryogeni c engines for the third stage of the rocket. For the first and second stages, the GSLV used the proven technologies from the PSLV, namely the S125/129 solid fuel boosters and the liquid-fuel Vikas engine, likely derived from the French Viking engine that powers the Ariane series of rockets of the European Space Agency. 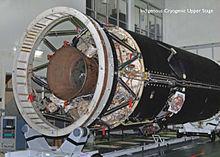 The original agreement was that Russia would sell India 5 engines and transfer technology for ISRO to develop and produce subsequent engines on its own. But the US stepped in sharply and mounted enormous pressure on Russia to scrap the deal on grounds that such technology transfer violated the Missile Technology Control Regime because it could also be used for inter-continental ballistic missiles. Russia then amended the agreement to outright sale of 7 engines and 1 mock-up stage without transfer of technology. ISRO had no option but to opt for indigenous development of the cryogenic engine about which more later.

Development of the GSLV then proceeded in fits and starts, sometimes using Russian engines and sometimes the indigenous one in hesitant steps. Given what can certainly be considered, certainly in hindsight, an under-funded programme of indigenous technology development, the GSLV saw many failures with both Russian and Indian engines.

The very first flight of the Mk1 version of GSLV D1 itself failed. Two successive flights succeeded only for the next flight in 2006 to fail taking its INSAT 4C satellite down with it.

By now ISRO was running out of its Russian bought engines, which were in any case not performing to promise and expectation, and were prone to problems as were other Russian components on the GSLV, and the future of the GSLV depended on the indigenous engines.

In 2010, the first flight of the Mk-II GSLV with the indigenous third stage failed, as did the next attempt in the same year with an Russian engine. These led to concerted trouble-shooting, rededicated efforts at rectifying problems with the Indian cryogenic engine and what was tantamount to a do-or-die launch this January which, fortunately, did not come to that.

GSLV would now have to go through two successive, successful flights and would only then be considered an operational launch vehicle. And it would take several more successful launches for international users to develop the confidence to use ISRO’s services for commercial launches on the GSLV.

Indian cryogenic engine If that is at all possible, the story of the indigenous development of the cryogenic engine is even more chequered, and somewhat shrouded in mystery, than the GSLV story.

ISRO had decided early on to embark on a programme to indigenously develop a cryogenic engine, having seen their success in NASA’s famous Atlas rockets, then on Japanese, French and Chinese rockets and finally on Soviet rockets in 1987. A Cryogenic Study Team was in fact set up as early as 1982 and drew up plans for indigenous development of a cryogenic. After that, a mysterious phase of indecision or hesitation followed which seemed to drag on even after the agreement to go for technology transfer from the then Soviet Union and later its successor State, Russia. In the early 1990s, top leadership of ISRO made public declarations that the Indian cryogenic engine would be ready in a couple of years, while other senior ISRO engineers maintained it would take at least 10 years. It finally took 16!

While adapting from the Russian cryogenic engine, ISRO had to master many new technologies including development of new materials and alloys.

The GSLV series, including its Mk-III version to be developed soon for heavier launches of 4 tonne plus payloads, will depend heavily on the reliable performance of the indigenous cryogenic engine.

But if the successful D5 launch is any indication, coming as it did after a series of failures and the valuable lessons learned from those, the indigenous cryogenic engine is here to stay and will power India to the next, more mature phase of its space programme.

Filling the demand gap The GSLV will enable India to at least partially close the enormous gap between its demand for transponders on communication satellites and what it is able to put up using indigenous launch capabilities and the far costlier launches by other agencies especially the European Space Agency.Aginst a target of 500 transponders by 2012, India now has only around 300 which, allowing for degradation and life, may effectively be only 200 or so in a few years time.

If India has to pay other Agencies to launch all the balance on satellites, it will cost a lot which could be saved if ISRO could take on the launches itself. Of course, this will not happen overnight but, with GSLV now on stream, India is finally on its way to have capability to launch its own communication satellites including for its ambitious satellite navigation programme. The Indian space programme has definitely come of age.