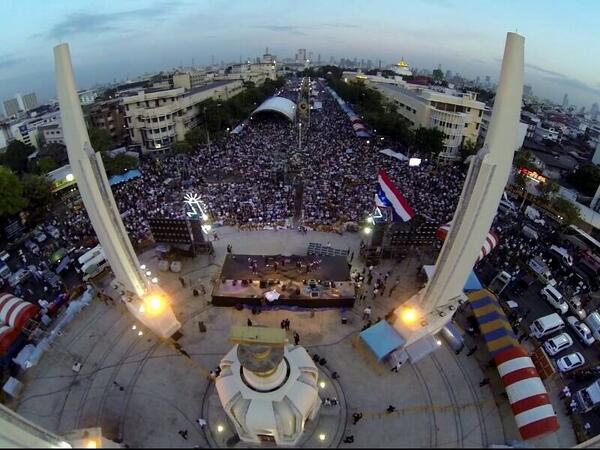 We are all too familiar, and unpleasantly so, with the advent of military drones and their extensive use particularly by the US in theatres all over the world and especially, although not exclusively, in counter-terrorism operations from Yemen, Somalia, various parts of West Asia and Africa, the Philippines and, or course, in Afghanistan and the undeclared war in north-west Pakistan. Whatever be the legal and ethical issues surrounding these obvious transgressions of sovereignty and airspace of other countries, the use of military drones is expanding rapidly with France and the UK now using them quite regularly, and Israel doing brisk business given its sound basic technology, early entrant advantage and relatively lower cost drones.

But we are perhaps less familiar with a less visible but nevertheless swiftly building momentum of altogether different kinds of drones, whose use in a variety of civilian, more day-to-day and perhaps even mundane contexts, are set to make their presence felt dramatically over the next few years.

Readers are advised to clear their minds of pre-conceptions. Even the word drone can be misleading if the term is associated only with military, conventionally sized armed aircraft. The more correct term would be Remotely Piloted Aerial Vehicle (RPAV). As we will see below, these now come in all sizes and shapes, especially the ones we will be mostly discussing in this article, ranging from full-size fixed wing craft to tiny palm-sized frames powered by helicopter-type motors. But for convenience, and for catchiness, let us call them drones!

Those who were watching live telecasts of the massive street protests in the Thai capital Bangkok a fortnight back may have noted that a BBC reporter, quickly followed by those from other agencies, was broadcasting a live report accompanied by aerial video coverage of the massive gatherings (see http://www.bbc.co.uk/news/ world-asia-25303252). The video was being shot not from helicopter or a camera planted on some rooftop, but by a small remotely controlled camera-equipped drone which the reporter had borrowed from a Thai protestor, who was among several demonstrators using this technology to see what was happening in different parts of that enormous crowd which they could not otherwise reach due to congestion, teargas or even stray bullets. Press-persons too were finding it challenging to be physically present in different location, especially since there had been several displays of anti-press hostility by sections of anti-government rallyists.

A week earlier on December 2, Jeff Bezos, CEO of Amazon.com, unveiled a surprise on live TV in the US where he even offered to give half his considerable fortune to any of the reporters present if they could guess what he was about to reveal. Bezos then showed them a range of small drones and a demonstration of a home delivery system using them. Of course, actual roll-out may take several years, but most basics are in place.

These and other applications now await further developments in technology, economics, logistical synergies with other ways of doing similar tasks and regulatory frameworks governing use of airspace.

Even as the US war in Afghanistan appears to be winding down, and although there appears to be a substantial and growing market for military drones, there is also a proliferation of manufacturers. Partly with this in mind, and also of course with an eye on future diversification, drone manufacturers are pushing the envelope and enlarging the scope of drone use through a wide range of applications, while simultaneously lobbying for new regulations that would accommodate routine rather than exceptional use of drones in everyday civilian contexts.

US manufacturers in particular are expecting fast expansion of opportunities in the domestic market. After intense lobbying by the industry, President Obama signed a new law in February 2012 directing the Federal Aviation Agency (FAA), which regulates use of US airspace, to allow extensive use of drones for all sorts of civilian and commercial purposes. That is a huge move away in a very short time, considering that even in 2007, the FAA was warning commercial users not to use drones for non-recreational purposes, that is to say only toy drones usually flown over parks were tolerated. We will return to the subject of regulation later.

Some industry estimates, for example from the Association for Unmanned Vehicle Systems International, put the current demand for non-military drones at around US$ 6 billion (Rs 3,600 crores) and expect this to easily double over the next five years.

Toy stores are of course already filled with drones that cost as little as 200 dollars, or even less for simpler models, which can be easily controlled and can perform quality aerobatics in experienced hands. But toys are just kids’ stuff, and many serious demands for drones of all sizes have emerged in recent times, both for commercial and developmental applications.

One potential use that has grabbed headlines recently is the home delivery system promised by Amazon. The idea is that orders for small goods received over the internet by Amazon would be delivered by drones at the very doorstep and the drones would return to base, guided throughout by GPS-linked navigation and not even requiring a remote pilot.

The idea is not as fanciful as it appears at first glance. While acknowledging it will take years of time and effort to work out a range of technical and regulatory issues to convert this into reality, serious interest is being expressed and money invested in drone-based home-delivery by the likes of UPS and FedEx courier giants, and the pizza company Dominos.

The demo video by Amazon can be seen at http://www.cbsnews.com/news/amazon-unveils-futuristic-plan-delivery-by-drone.

The concept is not to replace the delivery truck, but to complement it in last-mile delivery. After all, drones have limited range, would find navigation through congested areas quite difficult and longer-distance coordination could pose massive problems. Delivery companies estimate that 80 percent of all packages delivered are small enough to be delivered by drones. So one may imagine a delivery truck coming to a particular neighbourhood, opening up a bee-hive type panel with drones, which then autonomously deliver packages within that locality, while the driver himself physically delivers larger packages.

Numerous uses have emerged for drones of different kinds, taking advantage of their low operational cost, ease of operation, less reliance on skilled personnel and more on in-built technologies, greater flexibility and access to all sorts of locations.

Remote photography has clearly taken an early lead since it can be done with very small drones. Apart from news coverage, slightly larger ones carrying high-quality cameras have been used in disaster management, environmental surveillance, wildlife photography, urban planning, location scouting for films and a host of similar applications.

A hiker lost in a remote area of Saskatchewan, Canada, may have been the first person to have been rescued because of a drone. After the usual helicopter searches even with night-vision equipment yielded no results, and with below-freezing night temperatures looming, the Canadian Mounted Police or Mounties sent up a Dragan Flyer X4-ES drone with heat-seeking cameras which located the hiker and enabled his rescue. 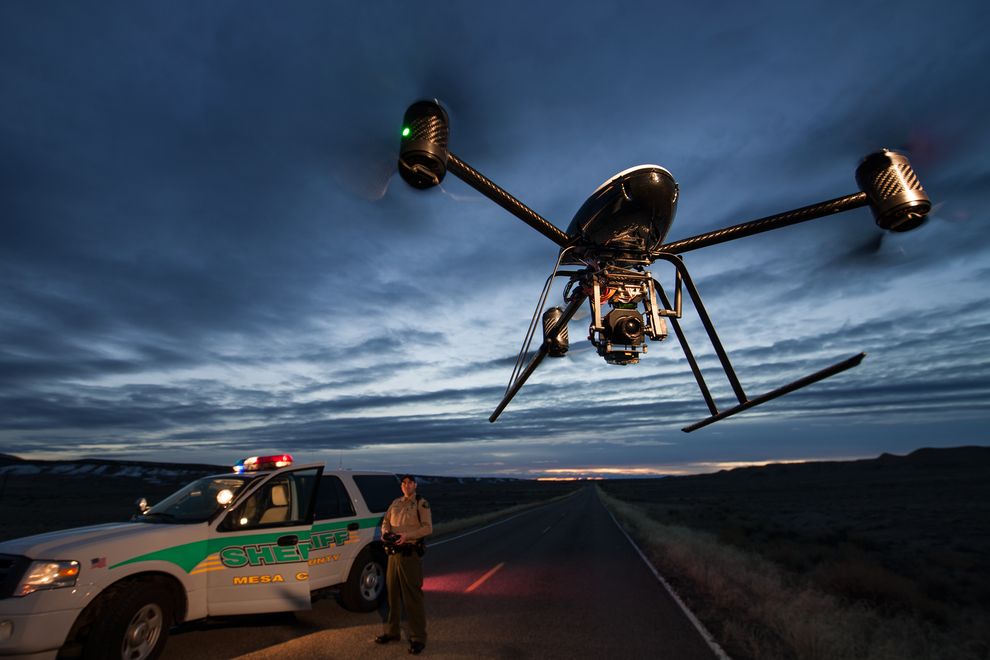 Drones both large and small have begun to be used in storm surveillance. Swarms of tiny six-inch copter-drones controlled by laptop have also been used in the centre of storms, and even underwater, to record otherwise difficult to get data on temperature, pressure, wind speed and so on.

Full size Global Hawk drones, normally used for long-duration military surveillance, are being extensively tested for gathering data in the heart of cyclones in a collaboration involving NASA, the US National Oceanic and Atmospheric Administration (NOAA) and Northrop Grumman. These drones are capable of very long flights of over 30 hours covering over 17,000 km and with long wing-spans can deal with high wind conditions.

Somewhat smaller yet fixed wing drones finding valuable use in agriculture are there. Japan has been using more conventional remotely controlled aircraft for agricultural survey and spraying on inaccessible hill slopes for over 30 years. But the much lower cost of modern drones, the navigational and surveillance equipment they can carry, their far greater manoeuvrability and precision control, have enabled deployment in much wider contexts.

Old-model and retired military drones are also being used by civilian government departments such as the US Geological Survey and Wildlife Departments for studies in land-use, deforestation, impact of mining, wetlands, and wildlife populations and behaviour. One invaluable Orang Utang survey using aerial photography by drones is on-going in Indonesia and Malaysia whose dense and often remote tropical forests pose huge challenges for conventional, physical surveys. In Africa, drone-based surveillance programmes are planned as part of efforts to combat poaching of rhinos and elephants linked to the still-thriving illicit trade and smuggling.

Agriculture is seen as a highly promising area, especially in the US and other regions with larger, modern farms. Apart from aerial spraying and routine surveillance for crop diseases, drones are finding increasing application in the growing movement of precision-farming in the US and parts of Europe. Specialised cameras and instruments are used to monitor plant health through infra-red observation of photosynthesis, to check soil moisture or nitrogen levels and then apply requisite irrigation or doses of fertilizer at precise locations, to similar study efficacy of pesticide use and apply it only where essential, to check for irrigation leaks and field canals, and to monitor specific field areas or locations.

Drones of different sizes and capability can be used for these and myriad applications, depending on the equipment and load required to be carried, task profile, flight duration and other parameters. For most of these, technologies are well on their way to becoming available and cost-effective, although several problem areas remain. However, it is likely that regulation, legal and institutional issues will pose the greater challenge.

Drones have come a long way indeed since young schoolchildren 50 years ago used to carefully glue together balsam-wood model aircraft and fly them using tiny petrol-driven engines and radio controls.

The large military drones came into their own with rapid developments in avionics, computing ability and computerised controls, satellite-aided navigation and of course complementary improvements in aerodynamics and engine design.

The new small drones, and especially the copter drones have benefited from all these, but especially from advances in extending software applications to small portable platforms such as tablets (most small copter and toy drones are today flown by tablets) or even mobile phones, miniaturisation of devices and control systems. In copter drones, the big advances have come in engines, particularly the peculiar aerodynamic problems encountered by tiny propellers which meant that, for many decades, these small engines could not even lift their own weight leave alone the craft and whatever appliance or device it was to carry. Propulsion has also shifted from the earlier gasoline-driven engines to electric micro-motors with lithium ion batteries, marking a major departure in engine design and capability, dramatically increasing the manoeuvrability and controllability of these machines. More further challenges are likely to lie in the software domain.

In the years to come, though, airspace regulation is likely to be the major issue. The US has taken the first steps, and Europe is feeling its way slowly. Restrictions on altitude, operation in crowded areas, requirements for collision avoidance, security are the foremost issues that airspace regulators are dealing with at present. With more crowded skies, more challenges are sure to loom.

Yet it is clear that a new age is dawning. And other, civilian, drones beckon. Even if, as some suggest because of their unsavoury association with military drones, they should really be called something else.