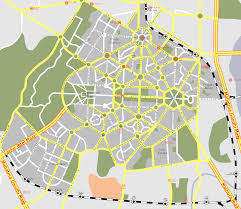 The Geospatial Bill, May 2016 has been released by the Ministry of Home for public discussions before being placed in the Parliament. The Bill is not about geospatial data or applications of geospatial data for development and better governance, but only about how to “protect” India’s borders on various maps, and “hide” sensitive information from its enemies. In the process, we have a throwback to the 19th century mindset, when Survey of India was the sole map making entity, maps were confidential and only paper maps existed. For Rajnath Singh, the current Home Minister, whose Ministry has cooked this special Geospatial Bill, 19th century might be a huge step forward. For the rest of us, such a mindset is not only completely regressive, but also designed to cut India out of the 20th, let alone the 21st century.

As per the Geospatial Bill, for publishing any geospatial information on India, we will need a license from a Security Vetting Authority. No, we did not invent this Kafkesque name, it is actually there in the Bill. Neither is this a one time license. It is for very time we want to publish any such data and it applies to every bit of geospatial data we generate – from a map showing, say drought or an earthquake in a newspaper (or a website), to a paper to be published in a journal. Or even a geotagged photo you take on your smartphone and publish on Facebook or Instagram. All of them, by this Draft, will need an application, payment of license fees and waiting for the Vetting Authority to clear your application. The failure to obtain a license can lead to a fine up to Rs. 100 crore or 7 years in jail!

This is not just downright stupid, but designed to take all geospatial data out of any development activities; or even in our daily lives. No research either on geographical differentiation, urban geography, or anything to do with location as a parameter in development.

Not only is the overreach only in terms of what it limits, it is also in terms on who it will apply to. Any Indian anywhere and any entity in or outside India. This is extra territorial reach of Indian law is again unworkable.

Geospatial information is any information that has some geographical location tied to it. It could be for example, land records, electoral data, spread of disease in an epidemic, location of restaurants, road maps, etc. All of them have have a geographical component and therefore can be displayed on maps. But they are much more than maps. When we use a GPS system with Google Maps, we are using data such as roads, street addresses, etc., on Google Maps, and our location on such maps derived from GPS signal on our mobile phones to navigate to the destination we want to go. This is an example of geospatial application, where data from different sources are mashed together to produce an application that helps us perform certain tasks. Without such systems, Ola or Uber, the cab systems would not exist – their application rides on top of mapping software, uses the GPS signal and is able to provide a way for the cabbie to reach a customer.

The problem with the proposed Geospatial Bill is that the Ministry of Home believes that all these applications are really maps, and any “map” should be vetted and any cleared before its use. They think publishing is printing, and therefore this function of vetting maps is akin to pre-censorship of any sensitive printed material. While we have rejected such pre-censorship in print, they think it should apply to all maps to ensure that the borders displayed are correct and all sensitive information pertaining to defence are removed. It does not recognise that maps today are a part of our everyday lives in myriad ways.

Yes, we need maps to show our borders correctly and not have detailed maps and images of sensitive areas. But we also need to understand that this should function by exception – unless it is a border or a sensitive area, no map needs to be vetted. And the only vetting required is of those areas and if sensitive installations are being shown. Asking for licensing of all maps and all geospatial data is like licensing each stalk of hay in the haystack for controlling the use of just the needle.

There is also the Hindutva mindset – the minute you say nation, you seem to get a Pavlovian reaction from its mass base. We only have to see the comments on various websites on this issue to realise that the BJP has a one-dimensional view of the world, where everything is a danger to the nation: from beef eating, to students asking from freedom from hunger and discrimination. The world is indeed a dangerous place for the ignorant, and their only answer is jailing all the dissidents and censoring the rest.

The difference between the Geospatial Bill and the existing mapping policy as given in our National Mapping Policy (NMP) of 2005, is that NMP applies only to maps. It describes what is not to be done – do not show wrong borders and do not show sensitive areas. It also makes a distinction between Open Series maps and Defence Series maps, with few restrictions on Open Series maps. Anybody using a map that conforms to the NMP provisions can overlay what they want on top of such a map. This means that only the underlying map has to conform to NMP, there are no further restrictions on what can be overlaid on top of it. We can put street maps, restaurants, our research data, or any other geospatial information of interest that we want.

Almost at the same time that the Home Ministry has come out with its desire to put all map makers behind bars, we have a very different document from the Department of Science Technology (DST), in the National Geospatial Policy, April 2016. While one can argue about the role of DST, and its failure to administer properly the mapping activity of the Survey of India, its policy document is at least a recognition that geospatial information is vital to development of the country. It also recognises that software, data and maps are all a part of today’s geospatial world, and we need to take all of them into account when framing a geospatial policy. It has also tried to get the Ministry of Defence, and Department of Electronics and Technology (DeitY) on board in such a policy formulation. What is missing here is Indian Space Research Organisation (ISRO), which is the only one that out of all the government institutions, have provided geospatial information with its satellite imagery and Bhuvan program.

The problem the Government policy has is that it has fallen way behind what is happening in the world of geospatial data, satellite imagery, converting images to vector form, mashing other data including maps on to such images. These are available from various platforms such as QuickBird, WorldView or GeoEye platforms – 0.5 metre resolution satellite images along with software that allows us to develop detailed plans using maps, and on such images. It is not that India is not launching similar satellites, but what we are offering needs to be supplemented by other data that are now commercially available.

Today, no government department can plan without using Google Maps/Earth to check what they are doing. For engineering projects – building bridges, drilling tunnels, alignment of railway tracks, this is not enough, but it is still a start, to be backed up by detailed on-the-ground surveys.

When any project is done today, it requires high resolution satellite imagery. The procedure to get any imagery data below 1 metre resolution is cumbersome and have to be routed through a National Remote Sensing Centre and a Committee for vetting all such proposals. It typically takes 3 months, in some cases even longer.

While all these are bottlenecks, we seemed to have progressed gradually towards a more open policy for geospatial data, a grudging acceptance of its utility and various government departments working together to create a workable geospatial policy. With the Geospatial Bill, we are back to the middle ages, where the only purpose of a map was military and demarcating the borders of countries. It is this one-dimensional view of the country, to see everything through a defence or a police lens that is the characteristic of the BJP’s medieval view of the nation.

There is no point in even trying to get some modicum of sanity in the Bill. We need to throw it out lock, stock and barrel. It has no understanding on what it is trying to do. If protecting its borders or not making sensitive information is the objective, then the National Mapping Policy already has that. Provide it more teeth if you want, but do not confuse it with geospatial data.

We do need a Geospatial Policy for the country. The DST’s document could be a start, but it needs ISRO and its satellite imagery programs to be folded into such a policy. We need the government to integrate the police, defence, development and the public interests views to create such a policy.

Just to remind the Modi Government – the Gujarat government during Modi-Xi Jingping’s discussions in Ahmedabad in September 2014 had annexed maps of India with wrong Kashmir and Arunachal Pradesh borders. Should the officials including the CEO of Gujarat (presumably the Chief Minister) been charged with criminal offence and put behind bars for 7 years? That is what this Bill wants. Time to think Mr. Modi?