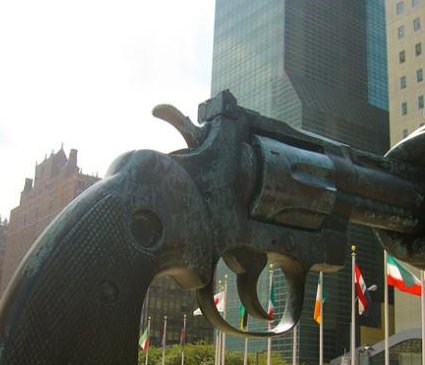 Earlier this week, the UN made history by adopting the first ever global Treaty to regulate trade in conventional armaments. The Treaty, among other measures, seeks to prevent and eradicate the illicit arms trade and to prohibit arms transfers where the weapons may be used to commit genocide, war crimes or human rights violations. The Arms Trade Treaty (ATT) is unprecedented in that it was adopted by the UN General Assembly (UNGA) itself unlike previous arms control Conventions, mostly restricted to specific categories of weapons such as landmines or cluster munitions, which were negotiated and adopted through special Conferences.

However, the Arms Trade Treaty (ATT) is deeply flawed in many respects but chiefly because it is built around an oxymoron, the idea of moral arms trade, and because it is a self-serving instrument designed by Western arms exporting countries to advance their own geo-political interests and perpetuate their hegemony in world affairs.

The ATT was pushed through the UNGA after the Conference could not achieve the requisite consensus, that is passage without even a single objecting nation. Much is being made of the fact that the objections, and hence the failure of the ATT Conference, were raised by Iran, Syria and North Korea who today top the West’s list of “rogue states” or “axis of evil.”

Even though an overwhelming 154 nations voted for the Treaty resolution, as many as 23 major nations abstained, clearly voicing their disquiet over many of the Treaty’s provisions. Russia, China, India and Indonesia were prominent among the abstentions, which included several Latin American states such as Bolivia, Cuba, Ecuador and Nicaragua (Venezuela could not vote because of unpaid dues to the UN), a clutch of Middle-East states such as Saudi Arabia, Yemen, Qatar, Bahrain, Kuwait and Oman, and Sudan, Egypt, Angola and Swaziland from Africa. As we shall see, these abstentions tell a very different story from the dominant narrative coming from the US and Europe and from Northern NGO champions of the ATT.

Background In institutional terms, the ATT is a follow-up from the earlier Programme of Action adopted by the UN in 2001 to Prevent, Combat and Eradicate the Illicit Trade in Small Arms and Light Weapons in All Its Aspects, and also takes into account and incorporates significant elements of the Protocol against the Illicit Manufacturing of and Trafficking in Firearms, their Parts and Components and Ammunition, the United Nations Convention against Transnational Organized Crime, and the International Instrument to Enable States to Identify and Trace, in a timely and reliable manner, Illicit Small Arms and Light Weapons. TNegotiations towards the Treaty itself were initiated by Resolution 61/89 of the UN General Assembly in 2003.

In substantive terms, though, the Treaty flows from the growing recognition, reinforced by several widely respected studies, that diversion of conventional arms or misuse of arms acquired through state-authorized transfers have been a far more serious problem than completely illicit or black-market trafficking. These studies showed that far larger quantities of weapons leaked out from official stocks due to theft or corruption than became available due to completely illegal transactions.

For many years, the ATT negotiations stumbled along in the UN with major arms exporting states, especially the US, other Western nations and Russia resisting efforts at international regulation of the arms trade. In 2006, the UNGA resolved to seek inputs from all member states and received mostly positive responses from nations almost of whom supported the idea of regulating arms trade in one form or another. Further momentum was provided by strong campaigning by large international NGOs like Amnesty International and Oxfam International who also pushed major Western governments especially in the UK and Europe into supporting an ATT.

Those who understand geo-politics and the dynamics of the military-industrial complex within global capitalism must understandably be puzzled by the readiness of Western States to push for and support the ATT. Do the US or other Western powers really want curbs on arms exports? Is the world truly on the cusp of a moral crusade against the arms trade?

Such questions are underlined by the hype with which the adoption of the ATT has been greeted by its votaries. Amnesty International proclaimed from the ATT Conference that the Treaty has “human rights protection at its core,” that it will “regulate the illegal flow of arms to warlords, tyrants and despots around the world, [and] could save the lives of millions and help prevent conflicts like those in Mali or Sri Lanka,” and that the ATT is a “bullet-proof” and “life-saving” Treaty. A spokesperson for Oxfam International said the ATT “sends a clear message to arms dealers who supply warlords and dictators that their time is up.”

Myth and reality Even a not very incisive reading of the Treaty reveals that reality will be very far from these idyllic scenarios.

At the very outset, the Arms Trade Treaty is very different from other major arms control measures such as those governing nuclear weapons, or chemical and biological weapons. These measures, however imperfect or slanted in favour of states that already possess such weapons and related technologies, have at least a stated goal of working towards an eventual eradication of such weapons and their proliferation. The ATT has no such goal. It does not even seek to reduce, leave alone eventually eliminate, trade in conventional weapons. Far from it, the ATT recognizes “the legitimate political, security, economic and commercial interests of States in the international trade in conventional arms” and “reaffirms the sovereign right of any State to regulate and control conventional arms exclusively within its territory, pursuant to its own legal or constitutional system.” This latter clause was supposedly introduced in deference to US wishes so as not to offend the provisions of the notorious 2nd Amendment provisions of the US Constitution which is interpreted by the Right as a guarantee of freedom of individuals to bear arms, but it equally means that what States do internally with arms it procures through authorized channels are completely outside the purview of the ATT. How then does it prevent officially sanctioned genocides, mass killings, atrocities against political opponents or other civilians? How does it prevent a SriLanka as claimed, unless the reference is only to arms used by the LTTE?

The ATT in fact does not in any way prevent arms supplies to “despotic” or “tyrannic” rulers but only stipulates that States would not transfer arms in violation of existing international embargoes or “if it has knowledge at the time of authorization that the arms or items would be used in the commission of genocide, crimes against humanity, grave breaches of the Geneva Conventions of 1949, attacks directed against civilian objects or civilians protected as such, or other war crimes as defined by international agreements” (emphasis added).

Recent history is replete with instances where imperialist powers led by the US have driven international arms embargoes, such as against Iran, Libya and Syria in a blatantly partisan manner pushing their own agenda. And which exporting State will acknowledge that it knows in advance that the exported arms will be used to commit crimes against humanity or attacks against civilians or for committing terrorist acts? And who is to determine this?

Sure, the Treaty obliges exporting States to reinforce domestic arms export controls, and to conduct due diligence and examine the risks of diversion or misuse, and also examine measures that could be taken to mitigate these risks circumstances before exporting arms. But, as has always happened in the past, exporting States will always find ways to underplay risks when they want, as has been consistently done by the US and European arms exporting nations to states and regions in conflict, for example in Latin America and Africa. And who in India can forget the numerous exemptions granted by the US to Pakistan every time the US wanted to export armaments as a means of appeasement, and the US threat of invoking prohibiting conditions on the occasions it wanted to exert pressure on Pakistan? The ATT will only add another layer to such subjective use of arms trade controls, and will only perpetuate the manipulation of arms embargoes, negative or positive labeling of States to suit Western geo-political ends.

Indeed, it is this well-founded suspicion that prompted Russia and China to abstain on the ATT resolution. Commentaries in both countries have pointed to the selective labeling of Libya and Syria to prevent Russian arms exports and the flip-flop over exports to Burma depending on the winds blowing through Washington or London. And India cited the imbalance between exporting and importing states, and the greater control the ATT gives to exporters, as a major reason for its abstention.

Corporates and Non-State Actors left out Even more telling is what the ATT does not address. There is no mention in the Treaty about arms exports to non-state actors. While the ATT does seek, in its Preamble, to “prevent and eradicate… diversion to… unauthorized end use and end users, including in the commission of terrorist acts,” there is no explicit prohibition of arms sales to non-State actors. Once again, the freedom with which Western powers have transferred weapons to chosen groups such as in Libya or Syria will not at all be curbed by the ATT but will actually be legitimized by it. This despite the numerous advance warnings, including by experts within the US itself, that arms to the armed opposition in Libya, for instance, would likely find their way to Al Q’aida affiliated groups, which is now widely acknowledged including by the State Department.

In its quite detailed statement explaining its abstention, India cited the absence of controls over arms transfers to non-state actors as one of its major reasons. India has long pointed to the “leakage” of US arms to terrorist and other armed anti-India groups and which have been used against both military personnel and civilians in India.

The ATT also does not specifically deal with arms manufacturers and the arms industry, only having some clauses to include brokers and traders, but depends fully on States and their internal controls to deal with these entities. Anyone even remotely familiar with the global arms trade knows well that arms manufacturers are major drivers of the arms trade and who exert enormous influence over States as regards both exports and imports. Any Treaty that ignores the role played by arms manufacturers is doomed to failure.

Linked to this is the astonishing omission of corruption in the Treaty language. It is common knowledge that corruption within nations as well as by exporting manufacturers, brokers or even States, plays a major role in the international arms trade. Transparency International for instance conducted a prolonged campaign for inclusion of suitable provisions to deal with corruption, and many nations raised the issue in their responses to the UN, but the issue was simply excluded. This should not have come as a surprise, given the role that corruption plays in both export and import of arms. The UK for instance, one of the major forces pushing the ATT, was involved in a major scandal over kick-backs in a major arms deal with Saudi Arabia, and ultimately invoked national security to quash any further investigations or actions.

All in all, the ATT is a toothless international agreement that will do less to control arms trade that to legitimize it. Its true test will be how much of the estimated $120 billion arms trade will be curb. And will it actually control diversion or transfer of arms to non-state actors. And as for human rights, the acid test can be applied any day. Israel has been condemned numerous times and by an overwhelming majority of UN member-states for egregious violations of human rights and international law, yet arms exports from the US and Europe continue apace. Will the ATT come in the way of arms supply to Israel? Some might argue that time will tell but to this writer, the answer is clear.