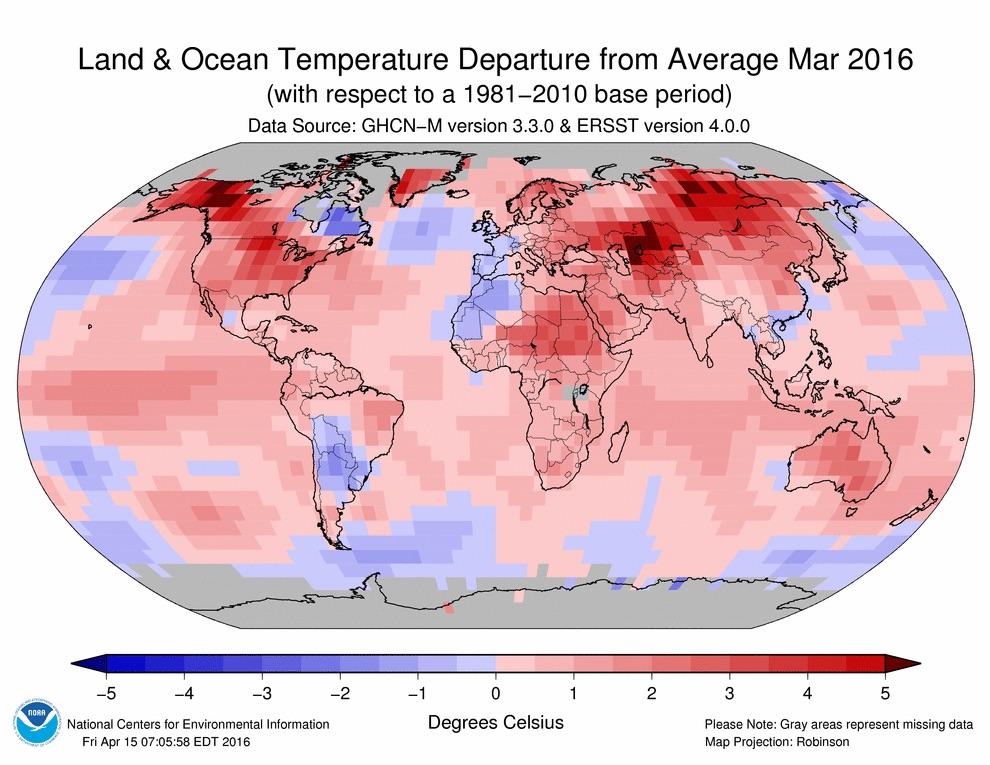 The world is currently smashing temperature records one after the other, with 2016 now looking very likely to be the third year in a row as the hottest year on record since 1850. Already, we have had hardly any winter anywhere in the world including the Arctic, and smashed the March all-time high temperature record by quite a margin. Two climate experts, Jeff Masters and Bob Henson write, “We are now hurtling at a frightening pace toward the globally agreed maximum of 2C warming over pre-industrial levels.”

The world is seeing a rise of temperature that is accelerating at an even faster rate than what the Inter-governmental Panel on Climate Change (IPCC) had anticipated The climate doomsday is indeed approaching fast, while the world is playing chicken regarding urgent measures that need to be taken before it is too late.

Anybody, who knows even a little bit about global warming, would know that we need a rapid switch to renewable energy including solar, and phasing out of fossil fuels. However, the US and the current trade rules in World Trade Organisation (WTO) are now being used to block such measures.

A case in point is the WTO Dispute Settlement Panel recently ruling in favour of the US on India’s mandating domestic content in its ambitious Jawaharlal Nehru National Solar Mission. This ruling puts at risk the 100,000 MW — or 100 Giga Watt (GW) – solar program, a critical component of India’s pledge in the Paris agreement on climate change. The WTO and the US believe that between trade and a sustainable world, trade must win.

The Climate Budget and the Poor Paying for the Rich

The enormity of the climate problem is due to carbon-dioxide, a product of burning fossil fuels that stays for a very long time in the atmosphere. So whatever we do today, will have long lasting effects. The amount of carbon we can burn without exceeding the 2 degree C limit that the world has accepted as “safe” is called the carbon budget. The IPCC, in its 5th Report, calculated a total carbon budget of 1000 billion tonnes or 1000 giga tonnes, starting from the industrial revolution, to remain within 2 degree C. We have already spent about 531 giga tonnes or a little more than a half of our carbon budget, leaving a little less than half for the future.

Some of this data is however a little misleading – the bulk of our existing carbon emissions have been produced only in the last 40 years. The developed countries countries have produced about two-thirds of the existing carbon emissions with only one-fifth of the world’s population, while the rest of the world with four-fifth of the population, have emitted only one-third. The earlier 1997 Kyoto protocol had accepted that while the industrially developed countries – Annex I countries — would cut their carbon emissions, the developing countries would choose a lower carbon intensive path with financial support from the rich countries (Annex II countries). This was the famous common but differentiated responsibilities clause – an anathema to the US and other rich countries. The 2015 Paris agreement has effectively jettisoned this understanding, the onus of reducing global carbon emissions now resting on all the countries, with bottom up pledges that each country will make, irrespective of their historical share.

The developing world is now required to choose a less carbon intensive strategy for generating electricity (or transport), even if costs to them are much higher than the fossil fuel route followed earlier by the rich countries. While the solar tariffs have come down significantly, a part of this reduction is due to subsidised capital costs – e.g., cheap bank loans – and do not reflect its true market costs. Even after lower costs of solar energy, the capital costs per MW of installed capacity is twice as much as from that of coal fired plants, while its energy output per MW is about one-fourth. This means we will have to install four times as many solar plants in MW terms than coal fired plants for producing the same amount of electricity, a much more capital intensive path for developing countries.

The Paris agreement has transferred the responsibility of saving the world from disastrous global warming effects on the poor countries. They will now have to pay for the profligate carbon consumption of the rich countries by adopting a high cost renewable route. This is the significant difference between the Paris agreement and the earlier Kyoto Protocols. Even today, more than 50% of the fossil fuel emissions are from the rich countries, and the pace of their conversion to green energy is glacial at best.

The poor countries will also have to pay for adaptation measures required for meeting the adverse effects of climate change, which are falling disproportionately on them, for example, the recent droughts in Sahel and India.

The WTO ruling on the US case against India on its solar program means that not only must the poor countries pay being forced to choose a high-cost, low carbon path, they must also allow the rich countries unhindered access to their markets while doing so. By this ruling, India cannot protect its indigenous solar industry from competition and dumping, even if the Indian tax payers are subsiding its ambitious solar energy program.

India is preparing to file a review petition in WTO on the ruling, which is unlikely to succeed. Given the narrow trade based prism through which WTO views all disputes, what matters to WTO and its panels is that free trade must prevail, even if devil – or in this case heat death – takes the world. After all the devil – and presumably the WTO panels — find the temperatures in hell quite to their liking!

India is threatening to file cases against the US on domestic content requirement, as many of the US states’ solar programs are similar to India’s. The US response from an unnamed US Trade Representative on India’s threats has been dismissive, “Tit-for-tat WTO filings will not support our shared efforts to deepen our bilateral economic ties, nor are they a responsible use of WTO resources.” A responsible use of WTO resources is presumably only for sabotaging efforts to mitigate climate change.

There are also disturbing reports that while government of India’s spokespersons including the energy minister Piyush Goyal are protesting against the US, they are in secret negotiations with it that domestic content requirement will be retained only for defence and the railways.

The argument that various “experts” have offered, largely repeating the US business papers such as Forbes, is that the WTO ruling would lower the cost of the solar cells and panels due to global competition, and therefore reduce India’s electricity costs. What is missing in this argument is that India switching a part of its energy capacity from fossil to solar is a high cost path anyway. One of the benefits to India of such a high cost switch should mean at least building industrial capacity and jobs. An economic efficiency argument cannot be applied only to the solar sector; it needs to take into account the entire energy cycle in the economy as a whole, and not just one element in the cycle.

Further, all industries initially need protection to be competitive, without which they cannot reach economies of scale. It is only when indigenous industry reaches a certain size, it becomes competitive and achieves lower prices. If we do not have indigenous manufacturing capacity, we would always be hostage to global capital, who can use their monopoly power to fix the price of cells and panels.

The India removed anti dumping duties for solar cells and panels in 2014. Subsequently, indigenous manufacturers have been squeezed out by cheaper imported cells and panels, particularly from China. Typically, the Chinese manufacturers, who have received government subsidies for setting up their manufacture, are 10-20 times the size of Indian companies. They have thereby achieved economies of scale, and lower prices.

India missed the boat in Paris during the climate change negotiations by not insisting that programs explicitly geared for renewable energy would be treated as exceptions under the WTO trade rules. It could have linked its ambitious targets for reducing the carbon intensity of the economy and the pledges on renewables to such an explicit exception.

While India – and the rest of the developing countries – should still raise this demand, without which the burden of reduction of greenhouse gases would fall disproportionately on them, the question still remains how do we address the WTO ruling?

For providing protection to India’s solar industry, we can take a simple route. Even under the existing WTO rules, India can procure solar cells and panels from indigenous sources, provided it is government procurement. Believing in market fundamentalism and private capital, the current NDA government has chosen, like its UPA predecessor, to ask private parties to set up solar plants. Under WTO rules, decreeing that these parties must buy solar cells and panels from indigenous sources, even if the government buys their electricity, does not qualify as government procurement. This was the plea that India tried in the Dispute Settlement Panel, which the Panel rejected.

There are other reasons why such solar plants should be state owned. The private parties are receiving subsidised finance from the public sector banks and assurance that public distribution electricities would buy their high cost electricity. This model is very similar to the discredited Enron Power Purchase Agreement model; guaranteed loans and guaranteed off-take means relatively risk free investments and a perverse incentive to inflate costs. Knowing Indian capital, their “share” of the capital means inflated capital costs being recycled from bank loans, and brought in as “investor’s capital”. This again is the Enron model. Not surprisingly, Enron had used the tax haven of Mauritius to hide these shenanigans. The Modi government needs to get out of its crony capitalism mode of promoting solar power and do what is best for the country.

While the argument that survival of the globe should trump trade rules makes sense to all right thinking people, the current status quo is heavily skewed in favour “sanctity” of trade rules. The countries of the global south need to build a global alliance that not only seeks to have the global north pay for its appropriating a disproportionate share of the world’s carbon space, but also to see that the burden of saving the world does not fall exclusively on the poor countries. Otherwise, the US and WTO rules mean that while the rich countries have created the problem through their profligate carbon consumption, the poor countries will have to pay for its solution.