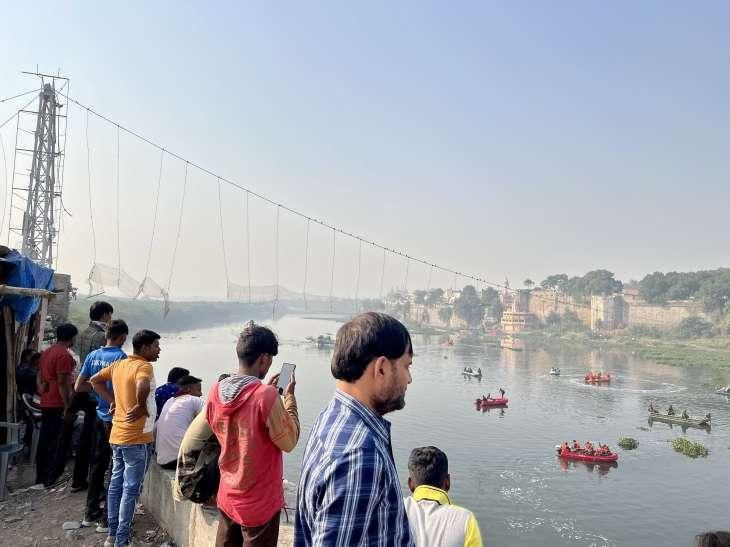 The Morbi pedestrian suspension bridge over the Machchu River collapsed on 30 October, leading to the confirmed death of 141 persons, primarily children and women. I will not repeat what is widely known regarding one of the worst bridge disasters in India. The question that needs to be raised is, whose responsibility is such a bridge in India? And did the authorities carry out those responsibilities?

Simply filing police cases against lower-level employees in the company, Oreva, a manufacturer of electronic clocks, CFL bulbs and e-bikes, does not take care of the issues this bridge collapse raises. Oreva was given the contract for the renovation of the Morbi bridge, although they had no experience in structural work. Yes, Oreva is responsible for taking on a job in which they had no knowledge or expertise. But why was such work involving public safety concerns given to a company with no qualifications and no previous experience? What role did the Morbi Municipal authorities play, who seem to have handed the contract to Oreva without any efforts to draw up specifications of what needed to be done or procedures to verify it had done the work safely?

This leads to two more questions: Who is responsible for bridges over rivers in India, and what was the role of the state government of Gujarat? Gujarat state has statutory authority over Machchu, as it is not an interstate river. So what did the state government do besides advertising the Morbi suspension bridge as a major tourist attraction and “engineering marvel”?

Let us first examine the contract between the Morbi Municipal Corporation and the company, Oreva (the agreement between them is widely available), awarding the company the contract for Rs 2 crore. The Morbi municipality did not issue a public tender for repairing a bridge that was 140 years old. Not only were no specifications given, but there was also no pre-qualification requirement for the work. All these are standard practices in any public work contract. In this case, it was even more important considering the age of the bridge and the obvious safety issues with any suspension bridge, let alone such an old one.

The agreement between Oreva and the Morbi Municipal authorities has a clause that no government authority would have any jurisdiction over the bridge for fifteen years, effectively handing over the bridge to the company. The state government has jurisdiction over any structure over a river unless it is an interstate river. So, was this contract issued without explicit permission from the Gujarat state government? Or did the Gujarat government allow the Morbi Municipality to give such a waiver? Or was the contract reached without taking consent? Considering the Gujarat government considered the Morbi bridge an “engineering marvel”, were the District Magistrate and the PWD utterly oblivious to the safety concerns regarding this suspension bridge?

None of these failures of the Morbi Municipality absolves Oreva. As per Indian law and the Supreme Court verdict on the Oleum leak case in Delhi, Oreva is legally responsible for the safety of the people it permitted on the bridge after buying tickets. Nor does Oreva’s failure absolve the Morbi Municipal authorities, who are the ultimate owners of the bridge, irrespective of their contract with Oreva.

There is also the question about engineering a suspension bridge, which is a more challenging structure. Any suspension bridge transfers the load of the entire structure onto two cables running on top from which the walkway hangs, supported by more wires. The burden of the whole bridge is on the main cables running over the bridge, which transfer the load to towers on either end. Unlike a bridge supported on piers or supports, a suspension bridge behaves as one structure. So, if such a bridge collapses, it does so as a whole. Hanging structures also face problems of vibrations due to wind, which can cause their collapse. This was witnessed in the famous Tacoma Narrows Bridge in Washington State in the United States, which collapsed in 1940.

What this means is a suspension bridge is as strong as its weakest member, in this case, the supporting cables. Since the cables on the Morbi bridge were more than a century old, there was a need to evaluate their condition, such as rusting and ageing due to repeated stress. But there is nothing in the contract regarding the state of the cables or their replacement if needed. Finally, the primary safety requirement: Should the bridge have been opened to the public at all, given its age? If yes, what should be the maximum number permitted on the bridge? Once again, complete silence in the contract. Reportedly, the bridge only accommodated 15 people at a time when it first opened. What was the number permitted before the renovation agreement? How was it increased to 125, as news reports say? And how did 400 or 500 people get onto the bridge on the fateful moment of its collapse?

From what little we have learned, Oreva also replaced the “deck” of the bridge. According to the Forensic Science Laboratory report, the weight of the bridge increased due to the changed flooring, and due to this, one of its main cables snapped. All these concerns should have been on the radar of the municipal authorities and the state government. If the Gujarat government advertised the Morbi hanging bridge as an engineering marvel and tourist attraction, what had it done regarding a safety audit of such a vital structure?

Referring the matter to the courts and holding a court-led investigation does not mean the state and central government authorities can avoid their own investigations to answer questions about the safety of the bridge. By ducking the question of who is responsible for the safety of the Morbi suspension bridge, the Gujarat government is putting its electoral needs above the people. Serious questions about the safety of such structures must get answered. If we do not learn from our mistakes in Morbi, we are condemned to repeat them. Considering there are many more suspension bridges in the country, we must not repeat the mistakes of Morbi and let more disasters strike before we draw the appropriate lessons.