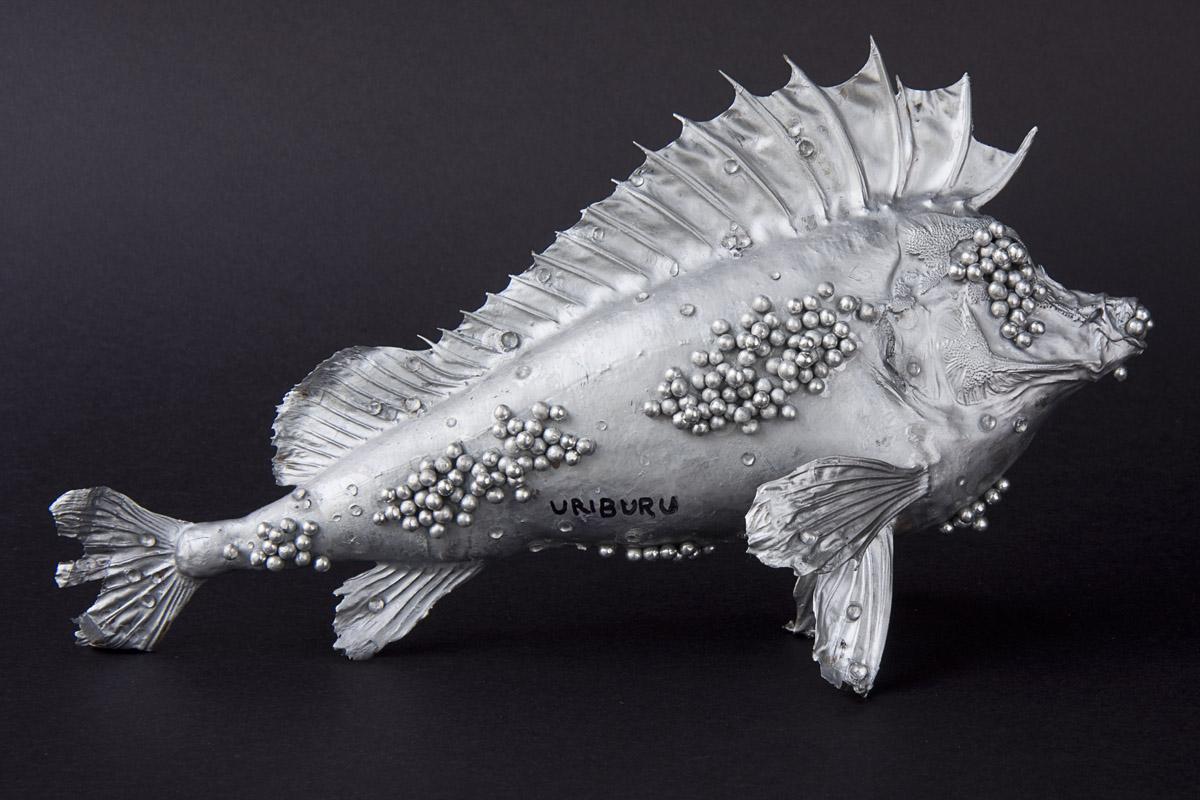 More than 2000 people died and over 10,000 were affected by industrial pollution during the 1950s and 60s in and around the coastal Japanese town of Minamata. A chemicals factory of the Chisso Corporation using mercury in its production processes had been discharging highly toxic methyl mercury into the bay where the toxin had bioaccumulated in fish and shellfish leading to mercury poisoning in local people and their pets, especially cats, that ate the fish. The pollution had in fact been going on for over 30 years but was linked to the factory and diagnosed as mercury poisoning only in 1956.

Not that mercury poisoning was unknown before Minamata. Use of mercury for different purposes dates back to antiquity. While the name for the most common mercury ore, cinnabar, is of Latin origin, similarities with the Persian zinjifra or the Sanskrit sugara indicate widespread and shared knowledge of the material. Techniques for separation of metallic mercury from the non-metallic sulphur in cinnabar ore were among the earliest classifications which were later to lead to the science of chemistry. Toxic effects of prolonged exposure to mercury especially inhalation of its fumes have been known for long. Most contemporary literature on the subject have obligatory reference to the Mad Hatter character in Alice in Wonderland, picturised with a tall brimmed hat. Mental problems and various physical ailments among medieval hat-makers who used mercury to stiffen brims using felt were well known. It was also common for sailors on ships carrying mercury to suffer seriously from on-board spills.

Minamata The Minamata tragedy drew public attention to the new phenomenon of large-scale pollution and the responsibility of corporations and of governments in the era of industrial capitalism.

It took many decades of activism and struggle in Japan and elsewhere in the world after the ‘60s for the responsibility to be pinned on Chisso, for the company to compensate the victims and affected survivors, and for the Japanese government to take necessary regulatory measures regarding other industrial wastes and chemical pollutants in Japan. The Japanese government, local administration and Chisso Corporation went through all the usual stages which India is so familiar with after the Bhopal Disaster: denial, looking for alibis in other possible causatory factors, minimizing the extent of the problem, and paying out compensation “out of sympathy” rather than in acceptance of responsibility and liability.

Minamata therefore was a watershed in leading to a better understanding of the systemic character of industrial pollution as a problem not only of plant safety or procedures, not only of environmental damage or pollution, but as a result of corporate behaviour and liability, and of governmental collusion.

It is therefore fitting that, when governments of the world met under the aegis of the United Nations Environment Programme (UNEP) and agreed on 19 January 2013 to the text of a legally binding global instrument on control and regulation of mercury, they decided to name it the Minamata Convention on Mercury. The Convention is expected to be signed into international law by ministers and other governmental representatives at a special Summit in Minamata in October later this year.

The mercury problem An estimated 15 to 19 million people are estimated to be directly at risk of mercury poisoning, apart from the general population who might be affected due to accidental spills or industrial mishaps. Problems can occur due to emissions of mercury vapours into the atmosphere, surface spills or from releases of mercury into water systems. Aquatic systems pose great danger due to the magnification that takes place through the food chain when mercury is consumed by fish and marine mammals which are eaten by humans.

According to the UNEP Global Mercury Assessment 2013, total anthropogenic emissions of mercury into the atmosphere is currently estimated to be around 1960 tonnes (as of 2010) per year but could even be as high as 4000 tonnes given the large uncertainties involved in data from different countries. Of the total emissions, about 30% are due to current emissions, about 10% due to natural emissions such as from volcanoes and evaporation from surface ores, and the remaining 60% are believed to be re-emissions from mostly anthropogenic previously accumulated mercury on land and water. It is also now estimated that anthropogenic mercury emissions have been higher than natural emissions at least since the industrial revolution.

Mercury accumulating in the top layers of oceans is estimated to have doubled in the past 100 years whereas in deeper waters mercury concentrations have gone up by only around 10-25% due to the slow penetration of mercury into the lower depths. In some Arctic marine animals, mercury levels have gone up 12 times compared to pre-industrial levels obviously due to industrial activity in Europe and North America, and a similar phenomenon is currently being observed in East Asian waters due to the rise of industrialization in Asia in recent times.

These huge releases of mercury now pose serious hazards to humans quite apart from the dangers to aquatic and other animals. Health problems caused by mercury poisoning include serious mental disorders including memory loss and delusions, impaired thyroid and liver functions, damage to the nervous system, tremors and fits, vision impairment and some cardio-vascular problems.

Whale, shark and tuna meats consumed widely but especially in East Asia have extremely high mercury levels due to bio-accumulation at higher levels of the food chain. So much so that eating advisories relating to certain sea-foods have been issued by many countries. Women of child-bearing age have been advised not to eat pike, perch, turbot and eel. Sweden has reported pike in more than 50,000 lakes and other water bodies having mercury levels higher than prescribed by international bodies such as WHO. In the US, just under 10% of women have mercury levels higher than safety levels prescribed by the Environment Protection Agency (EPA). In India, coastal peoples and others consuming fish are believed to be at risk doe to spreading contamination of sea waters around India and some inland water bodies as well.

In 1971-72, about 350 people died in Basra in Iraq because they baked and ate bread made with seed wheat treated with methyl-mercury as a pesticide. Closer to home, Centre for Science and Environment has reported high mercury levels in homes, food and water, and even in local inhabitants in Singrauli due to the massive coal mining and related power generation complexes in the area.

The Treaty The convention seeks to minimize if not fully eliminate use and release of mercury through a variety of regulations and controls, alternative industrial processes and substitute materials in a wide range of products.

As we saw earlier, artisanal and small-scale gold mining (ASGM) is the largest single user group of mercury and responsible for the largest releases. This sector produces around 12-15% of the world’s gold, mostly in Africa, South America and South-East Asia. About 10-15 million workers including 4-5 million women and children are involved in this sector. The sharp spike in gold prices in recent years has boosted production from the ASGM sector.

Elemental mercury is mixed or amalgamated either with the basic ore or with ore concentrates and then incinerated to yield the desired gold and, in the process, release mercury vapours from the amalgam. This is a highly inefficient process and almost all the mercury used is released into the environment. In the process of amalgamation, the mercury is able to capture only around 30% of the gold. The amount of mercury used is also very high, as much as 20 or even 50 times the quantum of gold recovered, and the rest is discarded as tailings or solid waste. The mechanical processes used also result in tiny droplets of mercury which are almost impossible to recover and simply lie around in these sites posing hazards to workers and their families.

A series of alternative processes, equipment and machinery have been evolved to reduce the quantity of mercury used, recover most of the mercury such as through use of hoods to trap mercury vapour during incineration while at the same time not put these millions of unorganized workers out of work.

Burning of coal in power plants, industrial boilers or even in household stoves is the largest source of atmospheric emissions of mercury. UNEP estimates that upto 95% of mercury emissions from power plants can be prevented through improving coal quality and plant performance . Process controls in coal washing and pre-treatment including blending, better control of the combustion process and flue gases, mercury-specific techniques to absorb or oxidize the mercury, and better handling of fly and bottom ash are among the measures recommended. Improved air pollution controls and stricter regulation in many countries have helped reduce emissions from coal-based power plants and offset much of the increase resulting from the sharp increase in coal-based power generation especially in Asia.

Chlor-alkali industry is another major user and source of mercury releases. Here, improved processes as well as mercury-free processes. About half of the around 100 industrial units in Europe, USA and India have already shifted to improved processes.

Under the Treaty, governments have agreed to phase out or ban a range of products using mercury by 2020. These include batteries except ‘button-cells’ used in implantable medical devices, electrical switches and relays, some types of CFL bulbs and fluorescent bulbs and ‘tube’ lights, soaps and cosmetics especially skin-lightening products, thermometers and blood-pressure measuring devices, and dental fillings. Some large measuring devices where mercury-free alternatives are not available have been exempted as have vaccines which use mercury as preservative.

The Minamata Convention is an important landmark in the control and regulation of hazardous substances. However, the battle against polluting industries and hazardous materials is far from over. And the campaign against corporate greed and unsustainable development has a long way to go.