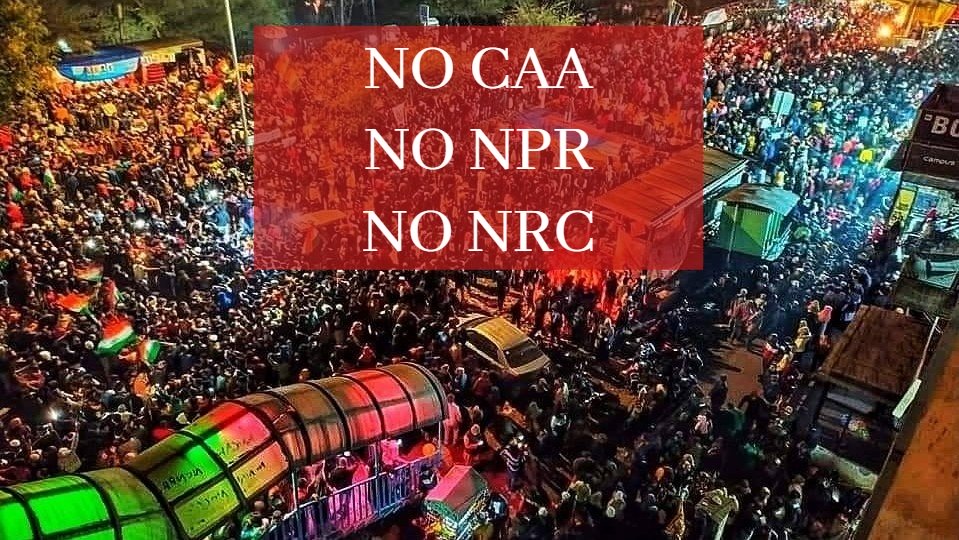 THE unprecedented popular struggles all over the country against the CAA-NPR-NRC trio of adopted and proposed legislations and executive actions have gripped India. Protest actions have taken many forms such as rallies, human chains and especially prolonged multi-generational multi-community sit-ins in public spaces, with strong presence of women especially from the minority community.  The Citizenship Amendment Act (CAA) is patently discriminatory in providing for granting citizenship to illegal migrants belonging to all religions except Islam and supposedly having suffered religious persecution in only three specified neighbouring Muslim-majority countries. The additional discriminatory and existential threat to domestic populations, particularly Muslims, was the clearly enunciated intention of the government detailed by the home minister in parliament, to compile an all-India National Register of Citizens (NRC), with a base being prepared by a tailor-made version of the National Population Register (NPR) scheduled to be rolled out in the coming months. Over many months, senior BJP leaders have repeatedly referred to presumably Muslim illegal migrants not only as “infiltrators” but also as “termites” etc. Taken together, CAA-NPR-NRC has come to be widely perceived as a direct assault on the secular, non-discriminatory foundations of the Indian republic.

The struggles have therefore consciously and vigorously articulated the constitutional values of secular democracy, liberty, freedom of expression, non-discrimination, fraternity, equality of opportunity, and welfare of all.  Numerous protest sites and actions have witnessed the reading aloud of the preamble to the constitution committing the nation to this path on behalf of “We the (sovereign) people.” This remarkable public reaffirmation of constitutional values has attracted attention and admiration all over the world. The Oxford English Dictionary even selected “samvidhaan” (constitution in Hindi) as “word of the year” for 2019!

On its part, the BJP-Sangh Parivar has been ramping up its defence of CAA-NPR-NRC and especially its attacks on the protesters. Their defence includes the familiar tactics of avoiding the main issue by deflection, diversion and obfuscation, de-linking the three aspects, repeatedly stressing that CAA only gives citizenship and does not take it away from anyone; that NPR is a simple enumeration exercise with no documentation required; while sidestepping the NRC which would indeed involve all these negatives, and either not mentioning NRC at all or repeating the obvious untruth stated by the PM that there had been no discussions within government about the NRC.

On the attack side, two strands are visible. First, communalising the issue by lumping together all opponents and Muslims, and by violent assaults on Jamia Millia University, Jawaharlal Nehru University and then the ghastly pogrom in North-East Delhi. Second, by the astounding claim that all opponents and protesters are anti-national or even treasonous for opposing an Act passed by parliament. In simple terms, opposing the BJP-Sangh Parivar view is itself objectionable, and no reasoned argument can be valid.

Right from the early days, top BJP ministers including the PM have been making fantastic claims about science in ancient India, viewed mainly as the vedic-sanskritic tradition. India was said to possess advanced knowledge and technologies many millennia before other parts of the world, such as advanced plastic surgery as shown by Lord Ganesha’s elephant head sitting perfectly on a human body, in-vitro fertilisation as shown by Kunti having borne children of distant gods without physical relations, internet at the time of the Mahabharata which is how Sanjaya was able to narrate the battle in far away Kurukshetra to the blind patriarch Dhritarashtra, scientific theories “better than Einstein” etc. At the prestigious Indian Science Congress of 2015, Sangh Parivar personalities held a side event on ancient Indian science where they made presentations on aviation and space technology in India “over 8,500 years ago” as shown by the mythical Pushpak Vimana. Such incidents and claims continued over several following years with numerous such claims.

When Indian scientists questioned these claims on several grounds, such as the absence of any corroborating evidence like contemporary knowledge in allied fields (eg: reproductive biology or advanced physiology) and indicative archeological finds (example of advanced materials used in aircraft or electronics), they were viciously attacked as Westernised, prejudiced, Macaulay-putra (descendants of Macaulay) or persons with colonised minds and, of course, were labelled anti-national. These scientists were also attacked for demanding evidence beyond mythology or Sanskrit texts of unknown origin, deemed sufficient by definition. Hindutva votaries also turned the scientific method on its head and demanded that scientists prove that such knowledge or artifacts did not exist.
Mythologies, both textual and imaginary or constructed, are viewed and propagated by the BJP-Sangh Parivar as real, as scientific, and as true history.

NASA photographs showing a row of submerged rock formations between the southern tip of India and Sri Lanka were proclaimed as “proof” of Lord Rama’s legendary bridge. This was used to reinforce a Ram Setu mythology and even to prevent a project for a navigable passage in that location. A mythical Saraswati-Sindhu civilization was propagated so as to Hinduise the Indus Valley civilization, with logic-stretching efforts and so-called studies to “prove” the existence of the legendary Saraswati at a particular location in Haryana, even going to the extent of digging a long channel and pumping water into it to recreate the river. Officially approved “research” projects have been launched into the miraculous curative properties of the Ganga, and the superlative physical and transcendental powers of yoga, meditation, yagnas and the like. As late as last month, the ministry of science & technology launched a research programme to uncover the special properties of bodily products of indigenous breeds of cows. Demands of scientists for rigorous research by first establishing the claimed uniqueness rather than prima facie accepting it as fact, and by comparing results obtained with those of hybrid and foreign cows were dismissed out of hand.
In other words, science and evidence-based reasoning are unnecessary. If Hindutva mythologies are subjected to critical examination, these would be either officially denied or refuted, attacked abusively or, as events would show, through mob aggression or even violence.

The 2015 assassination of Narendra Dabholkar, often described as a rationalist but in fact an indefatigable campaigner not only against superstitions but for evidence-based reasoning and scientific temper, brought home the reality of how far Hindutva forces would go to attack reason and enforce meek acceptance of mythology and Hindutva narratives. The subsequent cold-blooded murders of Govind Pansare, Communist leader and anti-superstition campaigner like Dabholkar, Prof. M M Kalburgi who questioned the dominant Hindutva-favoured narrative about 12th century anti-caste social reformer Basavanna, and journalist Gauri Lankesh who campaigned against attempts by Hindutva forces to silence their critics, all probably by members of one particular right-wing Hindutva group, reinforced this trend.

These may be seen as extreme examples, but the use of violence to suppress critical voices and critical thinking itself, was becoming routine and widely practiced by BJP-Sangh Parivar and related groups.

Universities became and still remain major targets as focal points of critical thinking, pluralism, democratic debates, and questioning and criticising government policies and Hindutva campaigns. It is small wonder that Hyderabad University, IITs in Chennai and Mumbai, Tata Institute of Social Sciences, of course Jawaharlal Nehru University (JNU) in Delhi and more recently Jamia Millia Islamia university in Delhi and the Aligarh Muslim University have been specially targeted by the BJP-Sangh Parivar including, in the last three, through violent attacks by police or mobs. The earlier prolonged struggle on JNU campus against the perverse characterisation of opposition to government policies as anti-national or seditious, became famous especially due to a series of daily public lectures by prominent academics and public intellectuals on the idea of India, and in defence of pluralism and critical thinking.
Key issues in all these cases have been critical voices, questioning of government policies and programmes and Hinduvta politics, and of late the CAA-NPR-NRC issue. All these debates would be viewed in most democracies as routine but are viewed by the BJP-Sangh Parivar as fundamental challenges and hence “anti-national.”

The BJP government and allied vigilante groups launched an aggressive campaign against cattle sale and suspected slaughter or beef-eating, especially targeting Muslims and dalits, leading to numerous public lynchings and deaths, not to mention a serious negative economic impact on farmers, animal husbandry, dairy farmers and the leather industry. Expert opinion and studies showing the harm being done were dismissed. The Hindutva campaign against beef, consumed in many parts of the country, also saw mob aggression and violence in many parts of the country.

This has also extended to campaigns for vegetarianism as a Hindutva ideal. Many BJP-ruled states introduced vegetarian-only meals into their mid-day meal programme despite opposition by nutritionists. Air India now serves only vegetarian meals, the only passenger carrier in India to do so. A recent interesting and research-based week-long festival of the Indus Valley civilization at the National Museum in Delhi featuring meals imaginatively conceived based on archeological finds of food remnants, tools and vessels, was overnight turned into a vegetarian event after complaints from some BJP MPs!

The Anthropological Survey has shown that over 70 per cent of communities in India eat meat, but the BJP-Sangh Parivar remain hostile to the idea of diversity and resist evidence-based reasoning contrary to their views, and even construct a perception, “an alternative reality” including in ancient history, to match their narrative.
The BJP-Sangh Parivar’s hostility to evidence-based reasoning has been carried to extremes, even at the highest levels of government.

After demonetisation, the BJP government dismissed all academic studies and expert opinion questioning the effectiveness of the measure. It did not matter that the total cash in circulation remained the same even after demonetisation which was supposed to have seen the confiscation of hoards of black money. In the face of hard economic data put forward by researchers, the government continued to deny any negative impact on the economy or any decline in employment. Response of government to the decline of GDP and real growth of the economy has been similar. Even data from renowned research organisations and government statistical organisations was denied and reports suppressed, raising national and international concerns about the integrity of India’s economic data.
For the BJP-Sangh Parivar, however, their own narrative and the creation of public perception based on that, is more important than evidence. During the previous elections in Uttar Pradesh, one BJP candidate declared that a particular district was witnessing a Hindu out-migration due to threats from minority gangs. When showed data from the local administration contrary to these claims, he blatantly pronounced that “perception is more important than data!”

CONCLUSION
It is small wonder that even the scientific community, in India as well as abroad, not usually given to political positions or campaigns, has been aghast at these developments, including the discriminatory CAA-NPR-NRC, and have voiced their concerns through several public statements.

In the US, where CEOs of 8 out of 10 IT giants are of Indian origin, Sundar Pichai of Google and Satya Nadella of Microsoft, came out against President Trump’s anti-immigration policies, stating that pluralism and diversity helped boost innovation, creativity and economic growth. The same luminaries have also voiced their concerns about CAA-NPR-NRC, much to the dislike of powers that be here in India.

The scientific community in India, and advocacy groups like the Peoples Science Movement, is clear that science and knowledge generation in general cannot flourish without pluralism and an atmosphere of open and critical thinking. Imagine if the climate of intimidation and persecution around Galileo and Bruno had persisted, or if Copernicus had not questioned the thousand year old almost divine Aristotelian earth-centric model of the universe. In what has been described as the knowledge era, India’s future and that of its youth will be in serious doubt if critical thinking and pluralism are suppressed.

And make no mistake. A key BJP-Sangh Parivar goal is precisely to attack evidence-based reasoning, critical thinking, and reason itself.