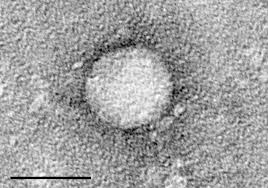 Capital’s greed to maximize profits respects very few boundaries. If the pharmaceutical industry were to be used as an example, it would seem that greed that is predicated on the helplessness of the sick and the ailing knows no bounds at all. Recent evidence for this comes from the marketing of a drug, called Sovaldi, by the US based company, Gilead. Sovaldi has quickly gained notoriety for being the ‘1,000 dollar pill’.

Gilead commenced marketing of Sovaldi in 2013, and its sales in the first quarter of 2014 had already touched $3.48 billion. Many predict that the annual sale of Sovaldi will outstrip that of the biggest block-buster drug ever – Pfizer’s Liptor (generic name Atorvastatin — a drug to reduce lipid levels in blood), whose sales touched $12.9 billion in 2006. Or, to put it in another way, at an equivalent of approximately Rs.78,000 crores, the projected sales of Sovaldi in 2014 would be more than the entire domestic market for medicines in India! Sovaldi (generic name: Sofosbuvir) is one of a new class of drugs that have been launched recently as treatment for Hepatitis C. Called ‘Directly Acting Antivirals’ (DAA), these drugs have the potential to radically change the lives of patients suffering from Hepatitis C.

Till recently not much was known about the Hepatitis C virus. It was discovered in the 1970s, as a viral infection that causes liver damage, that was distinct from the known viruses that cause liver infections – namely Hepatitis A and Hepatitis B. The disease was, thus, tentatively named as ‘non A non-B hepatitis’. It was only in 1989 that the causative virus was isolated and the disease was named as Hepatitis C.

The new DAAs do not share many of the negative aspects of peg-interferon treatment and can be used on almost all stages of Hepatitis C treatment, though evidence of efficacy in patients with frank liver failure is still not conclusive. Importantly, cure rates are in excess of 90% and may touch almost 100% when two DAAs are combined. Typically treatment duration is 12-24 weeks depending on the type of Hepatitis C infection. Depending on the genetic makeup of the virus, there are 6 distinct (but related) types (called ‘genotypes’) of the Hepatitis C virus.

Gilead’s 1,000 dollar pill targets a huge market. As awareness regarding Hepatitis C has grown, so has information about the prevalence of the infection. However most figures are still crude estimates, as hard data would require large cross sections of the population would need to be tested. However even the crude estimates are frightening. Globally, an estimated 160-180 million people harbour the Hepatitis C virus and many of them will eventually die of the infection. This means that, globally, the number of Hepatitis C patients is five times that of those infected by HIV/AIDS. Each year about half a million people succumb to Hepatitis C infection and Hepatitis C is the single largest cause of patients requiring a liver transplant – in itself an expensive procedure, available in very few centres in developing countries such as India. In India there are about 12-18 million people who are infected by the virus and about a 100,000 are estimated to die each year because of the infection. Some countries have extremely high rates of Hepatitis C infection, with Egypt reporting that 14-22% of its population is infected. The following Table provides information about Hepatitis C prevalence in the countries with maximum disease load. 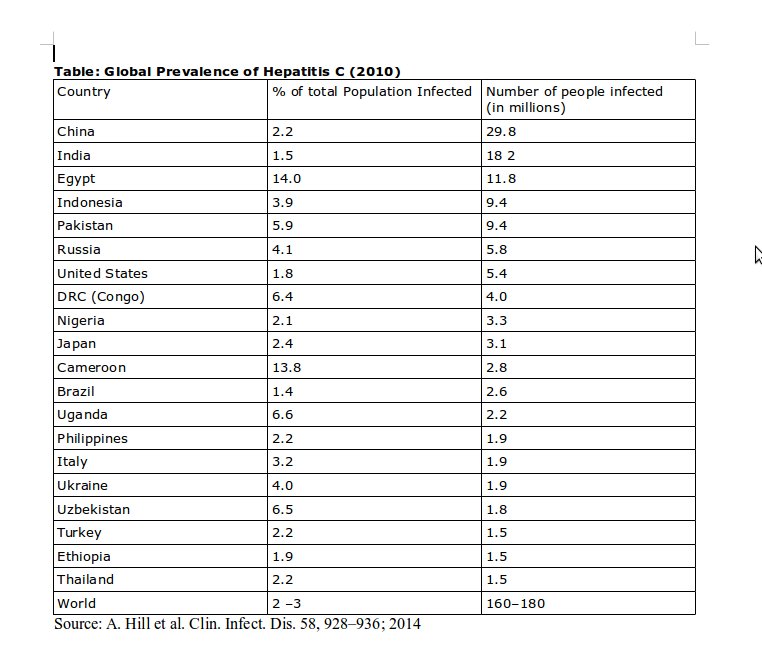 Symptoms and Transmission of Hepatitis C

The difficulty in estimating the real extent of prevalence is related to the peculiar way in which the Hepatitis C virus works in the human body. Hepatitis C infections vary in their effects on different people. A person infected by Hepatitis C may not show any symptoms at all, but 20% will show symptoms. These appear 2 weeks to 6 months after the initial infection. The acute symptoms are similar to those seen in other forms of hepatitis (A or B), and include fever, nausea, vomiting, dark colouration of urine and jaundice (yellow discoloration of skin). These symptoms are seldom life threatening and resolve over a few weeks. However, irrespective of whether or not there are acute symptoms, 15-45% of those infected are able to fight off the initial infection and get rid of the virus from the body. The rest become chronic carriers of the virus. While all chronic carriers are capable of infecting others (if their blood gets mixed with that of another person), only a portion of them will show signs of liver damage later in life. The damage caused to the liver progresses slowly, and some may exhibit symptoms 2 decades after they were initially affected. Those who die of the disease usually succumb because of liver failure.

Hepatitis C infections are transmitted through blood and blood products and sometimes through other body fluids. This is a characteristic that Hepatitis C infections share with another form of hepatitis, called Hepatitis B. However in the latter case most people who are infected exhibit acute symptoms and serious adverse events (including death) occur as a result of the acute disease.

The most common pathways for the transmission of Hepatitis C are: use of unsterilized surgical (including in dental practice) equipment, needles and syringes; blood transfusion with infected blood; and among injecting drug users who share needles. Less common methods of transmission include transmission to infants from infected mothers, and through sexual contact. Being a blood borne infection, Hepatitis C cannot be spread through breast milk, food or water or by casual contact such as hugging, kissing and sharing food or drinks with an infected person.

All patients who are infected will develop antibodies (the body’s immune response) to the virus, including those who eventually get rid of the virus on their own. These antibodies persist in the body and the screening test for Hepatitis C tests for their presence. A positive test indicates that the person has been infected at some point by Hepatitis C but does not prove that the person is still infected. A second test, which tests for a particular compound (a nucleic acid) that is part of the Hepatitis C virus, is needed to confirm that the person continues to harbor the infection.

Clearly, Hepatitis C is a complex disease with a variable course and requires fairly advanced facilities for detection. This is the reason why only rough estimates are available regarding the prevalence of the disease. Because of the difficulties in diagnosis and the expense involved in treatment, even in developed countries most Hepatitis C patients do not receive treatment. Treatment rates vary from about 21% of those affected in the United States, to 3.5% in Europe, to a small fraction of a percent in developing countries. However, two things have changed: the new drugs are much more effective, approaching a cure rate of 100%; and more recent estimates indicate that the disease burden from hepatitis C is much higher than earlier estimates. Further, the availability of the new drugs (a handful of these – apart from Sofosbuvir — are available, though most currently recommended treatment regimens include Sofosbuvir in combination with another drug) now makes it theoretically possible to eradicate Hepatitis C across the globe.

But for that to happen the new class of drugs must be accessible to all patients of Hepatitis C. Which brings us back to the story of the 1,000 dollar pill. So why is Sofosbuvir so expensive? There is nothing in the drug itself that should make Sofosbuvir expensive to manufacture. In a recently published paper by Andrew Hill an others, titled “Minimum Costs for Producing Hepatitis C Direct-Acting Antivirals for Use in Large-Scale Treatment Access Programs in Developing Countries”, the authors estimated that the total treatment cost over 12 weeks with Sofosbuvir should be in the range of $68-$136. The authors base their estimates on manufacturing costs, after factoring in a fair profit margin. So, with a fair profit included, a tablet of Sofosbuvir should cost one dollar and not a thousand dollars!

Does the reason for the high price of Sofosbuvir lie in high research costs? Even this is not true, as Sofosbuvir is not an original research product of Gilead. Sofosbuvir was developed in a small company – Pharmassett, and Gilead spent $11 billion to acquire the company in 2011. It was a purely commercial decision by Gilead, not based on the actual cost of developing the drug and entirely unrelated to its manufacturing cost. Gilead will have recouped more than what it had spent to acquire Pharmassett by the end of 2014, and is poised to make billions of dollars of profit through future sales.

Will India Respond to the Hepatitis C crisis?

Patients of Hepatitis C from across the world are hoping that Indian generic companies will provide them a lifeline by manufacturing and exporting low cost generic versions of Sofosbuvir. These expectations are based on the role that Indian generics played in making HIV/AIDS drugs accessible at affordable prices at the beginning of the 21st Century. The entry of Indian generics in the global market saw the cost of HIV drugs plummet from $10,000 for a year’s treatment, to $350 and progressively to less than $100. Indian generics made HIV/AIDS drugs accessible in low and middle income countries, thus saving millions of lives. Can the same happen in the case of Sofosbuvir?

Unfortunately 2014 is not 2001 (when Cipla launched anti HIV/AIDS drugs for the first time, and other Indian companies were soon to follow suit). The patent on Sofosbuvir has been challenged in India, and there is a good chance that it will be rejected. This would theoretically allow Indian companies to manufacture Sofosbuvir at a small fraction of its current $1,000 per pill price. But Indian generic companies are loath to confront giant American and European companies, unlike in 2001. A range of changes in public policy (including the amendment of the Indian Patent Act in 2005 as a consequence of India having become a party to the WTO agreement in 1994) have drastically reduced the bargaining power of Indian generic companies. There are reports that several prominent Indian companies are in discussion with Gilead to enter into collaborative arrangements. Gilead could license Sofosbuvir to a handful of Indian companies, but there would be severe restrictions on exports and the price reduction would be nowhere near what could happen if Indian companies were to have acted independently, without any licensing arrangement with Gilead.

Another barrier to a quick launch of generic versions of Sofosbuvir is the requirement to conduct clinical trials on the drug in India, which has been imposed by the Indian drug regulatory agencies. While India’s Drugs and Cosmetics Act allows a waiver on the requirement to do clinical trials when a new drug is introduced, if clear evidence is already available regarding the safety and efficacy of the drug, this waiver is not being applied any longer. This change in practice relates to a parliamentary committee report which had indicted the CDSCO (Central Drug Standard Control Organization) of corrupt practices while allowing new drugs to be launched.

None of these barriers are insurmountable if the Government were to intervene. The requirement to do clinical trials (and thus delay the entry of the drug) can be waived by the Government as the relevant provisions already exist in the Indian Drugs and Cosmetics Act. The government can also expedite the rejection of Gilead’s patent application. It can also wean away Indian generic cos. from entering into a collaboration with Gilead, by drawing up a collective plan to make available Sofosbuvir to Indian patients through the public health system and to export it to developing countries. An opportunity beckons again for India to reinforce its role as the prime supplier of low cost life saving drugs to poor patients across the globe. Unfortunately the government appears to lack even the vision to start acting along these lines.