TWO recent events show, once again, how the regulatory mechanisms that apply to medicines is deeply flawed and influenced by the industry. The first is the notification of ceiling prices for essential medicines by the National Pharmaceutical Pricing Authority (NPPA). The second is the order by the Central Drug Standards Control Organisation (CDSCO) to ban three medicines, including a commonly used anti-diabetic medicine.

The notification of ceiling prices by the NPPA comes in the wake of the announcement of the new Drug Price Control Order (DPCO). It may be recalled that the new DPCO has been mired in substantial controversy. The immediate reason why the government felt it necessary to notify a new DPCO was the insistence, in response to an ongoing Public Interest Litigation (PIL), by the Supreme Court of India that the government should take immediate steps to make essential drugs affordable.

The story behind the announcement of the new DPCO is long and tortuous. In 2003, a PIL filed in the Supreme Court of India had argued that drug prices in India are too high, and is a major reason why most people in India cannot afford drugs when they need them. We have a paradoxical situation in India as regards access to medicines. While India is the leading manufacturer of medicines in the developing world, the largest number of people in the world without proper access to medicines live in India (about 2/3rd of the Indian population). So, in other words, the pharmacy of the South (as India has been termed by some commentators) is unable to meet the needs of its own people.

The tragedy is that the problem doesn’t lie in lack of capacity to produce medicines – in fact India produces (and exports) almost all essential medicines. The principal reason why most Indians cannot use these medicines is that they are costed out of the market for medicines. Two major factors contribute to this. The first is the very poor coverage by public health facilities. Worse, even where public health facilities exist, they often do not stock all essential medicines. As a result over 80 percent of medicines consumed in India are purchased by patients through private outlets, ie, they have to pay from their own sources. Public sector provision of medicines is less than 10 percent of the entire amount consumed in the country. This is very different from the situation in countries with functioning health systems, where at least 70-80 percent of medicines consumed are provided by public health facilities.

The evidence regarding profiteering in the drug market is compelling. Several committees have pointed out that top-selling medicine brands in India are often sold at 10-20 times the price of other brands containing the same ingredients. The prices of many products are often 10 times or more expensive than the tender prices of the same medicines when purchased by public sector procurement agencies.

In order to curb this anarchy the Supreme Court, since 2005, has repeatedly asked the government to take appropriate measures. After stonewalling for seven long years, the government finally announced last year that they would bring in a DPCO that would put a ceiling on the prices of 342 drugs deemed essential as per the Essential Drug List formulated by the ministry of health.

DPCO At Behest of Industry

However the government put a major spin on the way the new DPCO was formulated. The new DPCO is clearly an attempt by the government to secure the interests of the drug industry. On the surface, it would appear that the government has responded to the Supreme Court’s orders. However a careful reading of the new DPCO shows how the order actually legitimises the existing exorbitant prices in the market.

To understand how this was done it is necessary to understand how earlier DPCOs fixed drug prices. Earlier, ceiling prices were fixed based on manufacturing costs. The entire input costs were computed, and then a markup was allowed to compute the final price. So, for example, the DPCO 1995 provided for a markup of 100 percent – this meant that if a drug cost Rs 2.00 to manufacture it could be sold at Rs 4.00. The new DPCO, keeping in mind the interests of the drug industry, decided to change the formula to a ‘market based’ mechanism. DPCO 2013 now calculates the ceiling price by computing the average price of all brands of a drug which have more than 1percent of the market share for the particular drug. As we have noted earlier, the market is flooded with drugs whose prices are exorbitant. So the average price based on existing market prices is tantamount to giving a license to drug companies to continue to loot poor patients. Calculations show that the price reduction will now only marginally affect the prices of top-selling brands (see later).

DPCO 2103 didn’t just stop at rigging the ceiling price fixation formula. It has other provisions that provide readymade avenues for drug companies to circumvent the DPCO entirely. In earlier DPCOs, once a drug was put under price control, all combinations of that drug with any other drug and all its dosage forms and delivery forms (injections, tablets, syrups, etc) automatically attracted the provisions of the DPCO. In contrast, DPCO 2013 specifies that the price control only applies to the specific drugs with the specific dosages mentioned in the essential drug list. This will have two effects. First, in one sweep it reduces the span of price control (see later). Further it is a perverse incentive for drug manufacturers to produce and sell irrational combinations of drugs and drugs in non-standard dosage forms. Thus, for example, if a medicine for pain and fever is placed under price control, profit-hungry companies would combine it with an antacid to remain out of price control even though the only reason for the combination is not rationality of treatment but the need to continue charging high prices. Similarly if the standard dose of a drug is, say 500 mg as prescribed in the essential drug list, a company can start selling a 450 mg version and remain out of price control. Again, the reason for doing so would be perverse – the need to make more profits.

Now that the ceiling prices are being notified it is possible to see how the new DPCO is going to be ineffective in curbing rampant profiteering. As expected, there is, on an average, a 20 percent reduction in price if we compare the ceiling price with that of the brand leader (ie, the top selling brand which is often also the most expensive). In the 15 drugs sampled below (Table 1), the difference between ceiling price and price of brand leader (ie, the top selling brand in that category) ranges from -25.82 percent to 43.03 percent. This is a far cry from independent estimates that top selling brands are often priced at levels that are 10-20 times higher if the manufacturing costs were the basis of price calculation. The impact on the entire range of brands will be much less, as drugs currently priced below the ceiling price will not be affected.

As DPCO 2013 is confined to the specified drugs and their dosages indicated in the Essential Drug List, the span of price control is very modest. An analysis of two drugs (Table 2 below) – Paracetamol and Glibenclamide –

shows that only 20.87 percent and 35.70 percent, respectively, of all products containing these two drugs will be covered by price control. As we had earlier apprehended, this will benefit the sale of combination products and non-standard dosage forms. 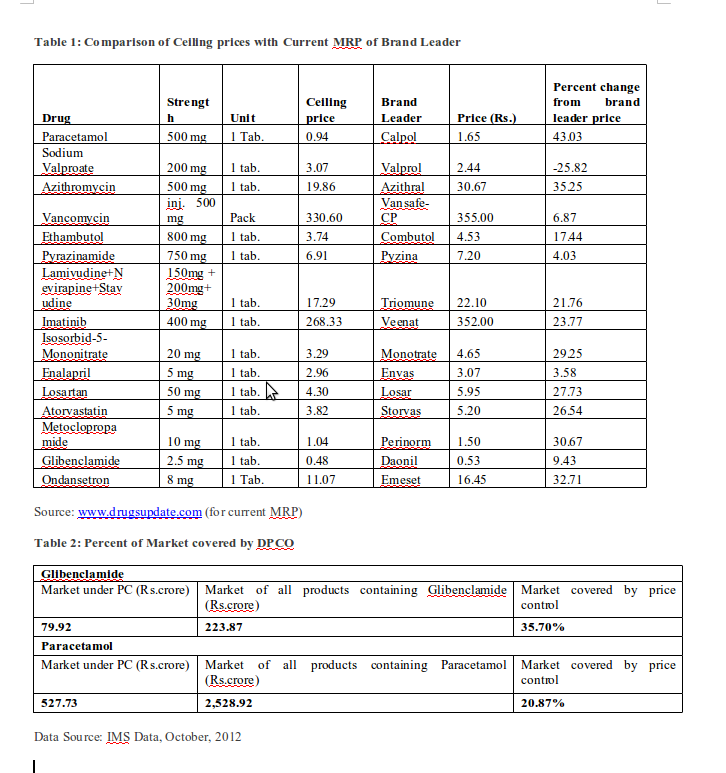 The other major source of controversy in recent weeks pertains to the banning of an anti-diabetic drug called Pioglitazone. Pioglitazone belongs to a relatively new class of drugs used to treat diabetes. It has been found to be able to treat diabetes better in some cases than existing drugs. In India, Pioglitazone is widely used and relatively cheap. A few weeks back the ministry of health decided to ban Pioglitazone. The ban was ordered, we were told, in response to global reports that long term use of the drug can lead to a higher risk of developing cancer of the urinary bladder.

What unfolded subsequently exposes the extent to which the unholy nexus between drug companies and regulatory agencies vitiates the system of drug regulation in India. It now transpires that the decision to ban Pioglitazone did not arise from recommendations by the Drug Technical Advisory Board (DTAB) – the apex body tasked with examining the rationality and hazards of drugs in the Indian market. Instead, the Drug Controller General of India (DCGI) is believed to have banned Pioglitazone based on a letter sent in January by Dr V Mohan, chairman of Dr Mohan’s Diabetes Specialities Centre. It now, further transpires, that Dr Mohan’s contention was earlier contained in a mere letter to the editor in the Journal of Association of Physicians of India (JAPI). In other words Dr Mohan’s findings were never part of a peer reviewed study.

The story doesn’t end here. It has also been revealed that Dr Mohan’s Centre is one of the participating institutions in five clinical trials involving the US multinational Merck’s anti-diabetes drug called Sitaglipitin. Merck, it is understood, also funds a certificate course at the Diabetes Education Academy in Dr Mohan’s Centre.

We are not going into the merits of the case and whether the reports of increased risk of bladder cancer warranted a ban on Pioglitazone. In most developed countries Pioglitazone is allowed to be marketed with a package warning that some studies have shown an increased risk of bladder cancer after Pioglitazone use. Dr Mohan himself has denied that his letter to the DCGI was motivated though he has not denied his links with Merck. We can give him the benefit of doubt and agree that he honestly believes that the drug should be banned. The issue is much larger – the fact that the DCGI chose to ban a drug even when the highest body tasked to ban or withdraw drugs found harmful (the DTAB) had not recommended the same. Worse, the DCGI chose to do so based on a letter from an individual who had clear links with a company that sold a competing product.

The DTAB has now recommended that the ban be lifted and the drug be allowed to be marketed with a package warning. The Pioglitazone episode is just the tip of the iceberg. In the specific case it just so happened that the whole sequence became public – possible because Pioglitazone manufactures had their own axe to grind and were also able to lobby successfully. The case typifies how corporate lobbying and favours to those in the decision making hierarchy determine the regulation of medicines in India.