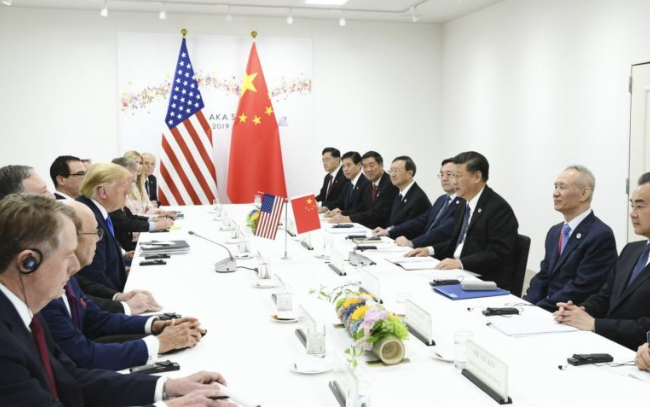 THE US sanctions on Huawei has transformed what started as a trade war between the US and China into a full blown tech war. The US has followed the additional tariffs of 10-25 per cent on $250 billion Chinese goods by putting Huawei, the Chinese telecom and mobile manufacturing giant, on the “entities list”, effectively a sanctions list. This forbids all companies having US content from selling to it. China has reciprocated by imposing tariffs on $60 billion US imports and has now threatened to place various US companies in an “unreliable partners list” from which other Chinese companies will be restricted from buying hardware.

In tough talk, responding to Trump’s tweets, the Chinese media carried commentaries that said if the US wants war, China is ready. There is a three month “grace” period before the US sanctions on Huawei will bite.

If we take the leading tech sectors – telecommunications and computer/smartphones – China has outstripped the US as an equipment producer. Even Apple, the iconic smartphone and PC manufacturer, gets its equipment manufactured in China, the Apple’s former CEO Tim Cook made clear why. He said, “China has moved into very advanced manufacturing, so you find in China the intersection of craftsman kind of skill, and sophisticated robotics and the computer science world…for us, the number one attraction is the quality of the people.”

In telecommunications, European companies Nokia and Ericsson still are major manufacturing players, along with Huawei and ZTE, the two Chinese telecom majors. But the US has no manufacturer that can compete with these four. In smart phones, though Apple leads the pack comfortably in terms of revenue and profits, in terms of market share – number of smartphones sold – it is now in the third place, behind Samsung, the Samsung giant and Huawei. The numbers of smartphones sold is only one measure of who leads the pack. The table below shows that Apple, which has been pushed to the number three place by Huawei in market share, is still significantly ahead of both Samsung and Huawei in revenue and profits.

In 5G technology, it is clearly the market leader in equipment and in its ability to deliver a complete 5G network solution, while its European competitors, Ericsson and Nokia are still at least one or two years behind. While there are US vendors such as Qualcomm, Intel and Hewlett Packard Enterprises in the fray, none of them have complete 5G solutions, from network to the 5G smartphones.

So what makes Huawei and other Chinese companies vulnerable to the US sanctions? In spite of much more advanced supply chain, skilled workforce and companies that have shown the ability to compete with the best in the world?

But as the Huawei sanctions demonstrated, the US and its allies still dominate two core technology areas, even if it is no longer a major manufacturing power. The problem that Huawei, and the entire Chinese telecom manufacturing sector has is its dependence on the US software – the Android ecosystem – and chipset designs where the US companies and institutions hold the intellectual property.

Initially, the key problem envisaged was that Huawei would be in Google’s Android operating system that drives the bulk of smartphones in the world. Android kernel is based on an open source version of Linux, and was thought to be relatively easier to fork and create a Huawei version. The problem here is that Google has consciously created an Android ecosystem that has key components in the Google cloud. The key dependency of our phones is not the Android based operating system, but components in the Google cloud that we need to download apps from its Play Store. Google has created a private ecosystem, from which if a company is barred, it has to recreate the entire ecosystem.

It is not that this cannot be done. Apple has done precisely that. Amazon is in the process of building a similar ecosystem. Huawei can also do it, and all Chinese manufacturers have already incorporated on their phones various non-US based apps for social media and search engine applications that work in China. But in the international market, this is unlikely to be an attractive solution. So Huawei may very well lose a significant market share in the near future, before it can build an ecosystem similar to what Apple has.

The impact of the hardware ban is much more serious for Huawei. Huawei has a decent manufacturing set up and manufactures most of its core chips and processors it requires for the smartphones. The key dependency that Huawei has is that most processor designs in the world today come from a single company – ARM Holdings, UK which is now owned by the Japanese Softbank. ARM designs the chips, which are licensed to companies such as Qualcomm, Samsung, and Huawei. These firms use ARM’s technology to build their own processors, which are then incorporated into the smartphones, tablets, and other smart devices.

ARM has said that more than 25 per cent of its design comes from the US (licensed from Michigan University) and therefore it has to cut Huawei out as a partner organisation. Huawei can still use existing designs and software that ARM has licensed. But if it cannot upgrade its processors, it will get frozen out of future developments, and fall behind its competition.

Does Huawei have a solution after losing ARM? After the US sanctions, Hisilicon’s chief executive He Tingbo, Huawei’s wholly owned chip manufacturing subsidiary, wrote in an internal memo: “All the spare tiers we have built have turned to Plan A overnight.” These spare tiers – or Plan B – was a complete set of designs and solutions to beat a sanctions regime that Huawei knew would come one day.

How realistic is it for Huawei to survive being cut off from all US designs and software ecosystems? On the 5G network equipment side, China should be able to ride out the manufacturing side. It may still lose the markets in Europe and elsewhere, where countries may be hesitant to go against the US sanctions, but still would retain a substantial market share in the emerging 5G market due to its technology lead.

But what happens to Huawei’s smartphone market, where it is challenging both Samsung and Apple? Will their Plan B, for both the Google-Android ecosystem and losing ARM, work? With the existing ARM designs already licensed to Huawei, its latest processor will see its smartphones through for the next 12-24 months. The crunch will therefore be in 2021-22, or the next generation of smartphone processors.

China has threatened reverse sanctions on US suppliers by drawing up a list of unreliable suppliers, who can be barred from the Chinese market. China consumes a huge amount of chips from US companies, so such a measure would hit the US chip manufacturers hard. China can also impose taxes on Apple and other products that US companies routinely manufacture in China. People may believe that China would also lose heavily in such a scenario, but the value added by China to Apple’s Iphone is only about $8.5 out of a total factory cost of $237.5. So China’s loss would be low, but Apple could suffer big time. The other option that China can exercise is its control over rare earths: China supplies nearly 80 per cent of global demand in which the US defence suppliers are major importers.

So the question boils down to how long can the US play chicken with China before irreparable damage is done to both their economies and the global trade? Do we have an international voice anymore that can stop the unilateral action by the US? Or is it the moment that international opinion recognises that the US is still the global hegemon, even if it has turned into a rogue one? Unless this trade cum tech war stops, we could be see the end not only of the existing trade regime, but also the permanent disruption of the global supply chain. It also places squarely issues of tech sovereignty –  what we earlier called self-reliance – back on the table.