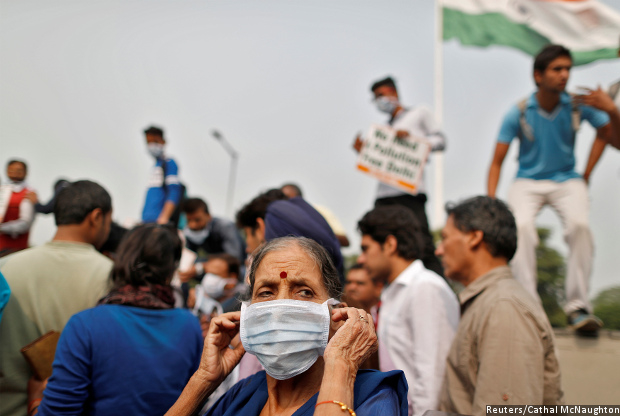 So here we are once again, winter and a blanket of severe pollution in Delhi and the north Indian plains in general. These columns carried an article on the subject last year too, and it is déjà vu now. All concerned authorities are blaming the others, multiple problems are being pointed out, and a smog of confusing data to rival the smoke haze is being put out by numerous agencies and experts. The Chief Minister of Delhi has ordered a series of emergency measures, and the Courts have added their own. Combined with improved weather conditions and some good luck, these may bring some temporary relief. Question is whether these measures will be able to bring the pollution under control, and whether different agencies involved will each their play their respective roles and coordinate with each other?

But an even bigger question remains too: what will citizens of Delhi and other towns and cities in North India do next winter, and the winter after that? Will they yet again suffer several debilitating weeks of suffocating air pollution? Will thousands of citizens, especially the very young, elderly or otherwise vulnerable, yet again die premature deaths or suffer grave respiratory ailments? Apart from periodic or even annual fire-fighting actions as are currently being initiated, can some long-term, concerted, result-oriented measures be put in place to tackle what is clearly a recurrent and systemic problem?

Pollutants and proportions Press reportage is as usual full of detailed and often contradictory and confusing information, quoting a variety of experts, about the different sources of pollution and their relative proportions. Unfortunately, far from clarifying the picture for the average citizen and shining a light on what may be done for prevention or amelioration, the data is confounded by diurnal (day-night) and seasonal variations in observed levels of the different pollutants, weather factors that contribute to lessening or worsening pollution levels, and so on. One needs to cut through these nuances in order to better understand the overall characteristics and causes of air pollution in Delhi and other urban areas, and point to long-term solutions.

For instance, it is of course well-known that air pollution by particulate matter spikes sharply in October-November due to burning of crop residues in neighbouring states especially Punjab and Haryana, not to mention from West Punjab across the border in Pakistan. These farm fires and the resultant smoke plumes are clearly visible in satellite imagery. These pollutants are then carried over Delhi and other cities in North India where, under conditions of low winds and cooler temperature keeping pollutants relatively stagnant and closer to ground, they add hugely to the pollution load in the city.

The Union Environment Minister, while calling for authorities to avoid the blame game, said pollution was a State problem and added that crop-residue burning in neighbouring states contributed only 20% to the problem. As if 20% were not a substantial pollution treatment that ought to be addressed seriously. On his part, the Delhi Government’s Environment Minister countered that while 20% may be the contribution on an annual average basis, it was around 70% at the present juncture. Both were trying to deflect attention away from their jurisdictions and responsibilities, and both are wrong.

First, it is widely acknowledged that the acute and persistent problem of air pollution is not faced by Delhi alone but by all cities in the country especially in northern India. Also, the problem in Delhi is not caused from within Delhi only but by sources such as coal-based power plants, industries, biomass burning, brick kilns, dust and vehicular movement in the wider north-western region and by regional weather and climatic factors.

Second, and importantly, notwithstanding all these regional factors, there is a high base load of air pollutants in Delhi and most other cities.

At the peak of the present crisis, PM 2.5 levels had risen to a staggering 600-900 microgrammes per cubic metre, over 10-15 times the prescribed Indian limit of 60, itself 6 times more than the WHO standard. PM10 similarly was at over 1600 compared to the prescribed Indian limit of 100. When conditions turned more favourable, with decrease in crop residue burning with most of the on-farm task having been completed and with improved weather conditions, PM 2.5 levels had fallen to around 150 at the time of writing. The point which both Central and State Ministers avoided mentioning was that, even after the problem of crop residue burning had subsided, Delhi still had its perpetually high base level of air pollution resulting from vehicular, dust, industrial and biomass combustion sources. This is what has resulted in Delhi being ranked among the worst polluted cities in the world consistently for the past several years, this year ranking 11th in the WHO list among 3,000 cities in 103 countries in terms of PM 2.5 and 25th in terms of PM10. It is this base pollution load, again with seasonal variations and only some of which is contributed by out-of-state sources such as trucks in transit or brick kilns in neighbouring States, that needs to be addressed in the long term.

Emergency measures such as shutting schools, sprinkling water on roads, banning use of generators and stopping all construction activity are obviously stop-gap steps that cannot be continued indefinitely and will be discontinued once the peak crisis is over, leaving us with the recurrent problem of horrendous air pollution levels not only in Delhi but in all major north Indian cities that have worse air pollution than their counterparts elsewhere in the country die to their winter inversion and fog, absence of sea breezes and high ambient dust.

Other pollutants Many cities around the world have an air pollution monitoring system, with different pollution levels that trigger graded responses of reducing traffic, closing schools and institutions etc. Delhi too could experiment with some such measure, but cannot escape taking long-term measures to bring down base levels of pollution and addressing those local or regional occurrences and conditions prompting major air pollution spikes.

Within Delhi, it is clear that vehicular pollution, construction, road and ambient dust, industries, burning of coal, biomass and municipal solid wastes, are the major sources, whatever be the nuances of diurnal or seasonal variations, weather factors etc

Vehicular pollution is the elephant in the room. It is noticeable that few of the articles or expert commentary in the press ahs focused on vehicles. Part of this is due to the misleading data from numerous expert bodies and studies which, either deliberately or unconsciously, underplay the contribution of vehicular pollution in Delhi, often by overplaying other pollutants like dust or particulates in general without dis-aggregating different kinds or by over-emphasizing seasonal variations in which proportions may change.

There cannot be any doubt that the 6.5 million vehicles of all kinds including about half that number of 2-wheelers are major sources of pollution. Various interim solutions to tackle pollution from vehicles have been suggested, including advancing the year of introduction of Bharat Stage VI emission control norms in vehicles and fuels (some advance has since been announced), retro-fitting particulate traps on vehicle exhausts and so on. The Supreme Court has been pushing for de-commissioning 15 year-old diesel vehicles and tried preventing registration of new large diesel SUVs, but has not paid necessary attention to reducing or eliminating diesel passenger cars altogether.

The issue of rapid dieselization of the car fleet in Delhi has also been ignored due to the almost exclusive focus on particulates while ignoring gaseous pollutants such as nitrogen oxides (NOx), now recognized as being even more deadly to public health than PM 2.5. It bears reflection that in 2014, a study in the UK revealed that London suffered from much higher pollution than EU standards, mainly due to NOx from that city’s ubiquitous diesel-powered red buses. The report held NOx responsible for the spike in pollution-related deaths in London which had crossed 9,500 a year, with “only” 3,500 deaths attributed to particulates!

NOx from vehicles, power plants and industries are themselves highly toxic gaseous pollutants. Along with sulphur oxides (SOx) mostly from power plants, NOx gases also react with other airborne substances to form what are called secondary particulates, especially PM 2.5. NOx also results in formation of deadly ground-level ozone. It is noteworthy that the pollution load from NOx is especially high in Delhi.

Longer-term approach Over and above this, it is clearly imperative that Delhi take urgent steps to sharply reduce the number of vehicles on its roads and the only way to do that is to substantially scale up mass public transportation. The Metro is rendering yeoman service but, even at its planned roll-out over 400-plus kilometers track length, Delhi will need other mass transportation, chiefly buses. Delhi currently has around 4,500 buses, of which only half are operational at any given time, and even this depleted stock carries as many passengers daily as the Metro does! It is projected that around 10,000 buses would be required for Delhi. Unfortunately, even the 1,000 buses promised by the Delhi government have not been introduced yet. Surely, the Delhi and Union governments should be able to coordinate towards enabling this, including regarding the vexing problem of parking depots for which DDA says it has no land, while land for all sorts of projects somehow miraculously become available.

The ring railway lies virtually unutilized whereas it could carry huge loads of passengers with proper connectivity with other modes of transport.

There has been little or no discussion of public transportation in this whole debate but, without it, there can scarcely be any long-term solution to Delhi’s air pollution.

Construction dust needs to be tightly regulated and controlled by a series of measures, especially including construction techniques and handling of construction materials and wastes. Here implementation and coordination between different agencies is more important than new rules or laws.

An equally serious problem is road dust. Vacuum cleaning along 1,250 km of arterial PWD roads may hardly scratch the surface when more than 12,000km of smaller roads under the Municipal Corporations are virtually dust bowls, especially with unpaved stretches on either side. Paving or having road surfaces covering these “right-of-way” stretches should be seriously considered if Delhi is not to be permanently saddled with open dust traps. The same applies to central verges if soil and greenery on them cannot be properly maintained. On the other hand, more green belts, avenue trees, parks and water bodies would be important to keep dust down.

Burning of Municipal Solid Wastes (MSW) locally, even though it is banned, or spontaneously due to generation of methane in overflowing landfills, is another menace. The trend of setting up incineration-based “waste-to-energy” plants needs to be reconsidered in favour of decentralized segregation and bio-methanation, instead of having these monstrous landfills resulting in production of methane, which is a dangerous greenhouse gas besides resulting in a variety of pollutants among other things from spontaneous fires.

Obviously, problems in the region such as burning of crop residues, and old and inefficient wood or coal-fired brick kilns and coal-fired power plants need to be tackled on a priority, long-term basis. There is little point in adopting a purely punitive approach to farmers burning crop residues especially from non-basmati paddy. Farmers who are already squeezed by low crop prices and rising input prices are understandably loathe to spend more money on tractors to plough the residues back into the field as manure, and also do not get a remunerative price for the crop stubble if they do spend on the labour or machinery to remove it. Governments including the Union Agriculture Ministry need to get together to devise a system to incentivise farmers to deal with this problem and recover some of the costs through utilization of the agro-residue to make a variety of possible products.

A long-term and systemic problem calls for long-term solutions that lie in sustainable development rather than in temporary band-aid quick-fixes.