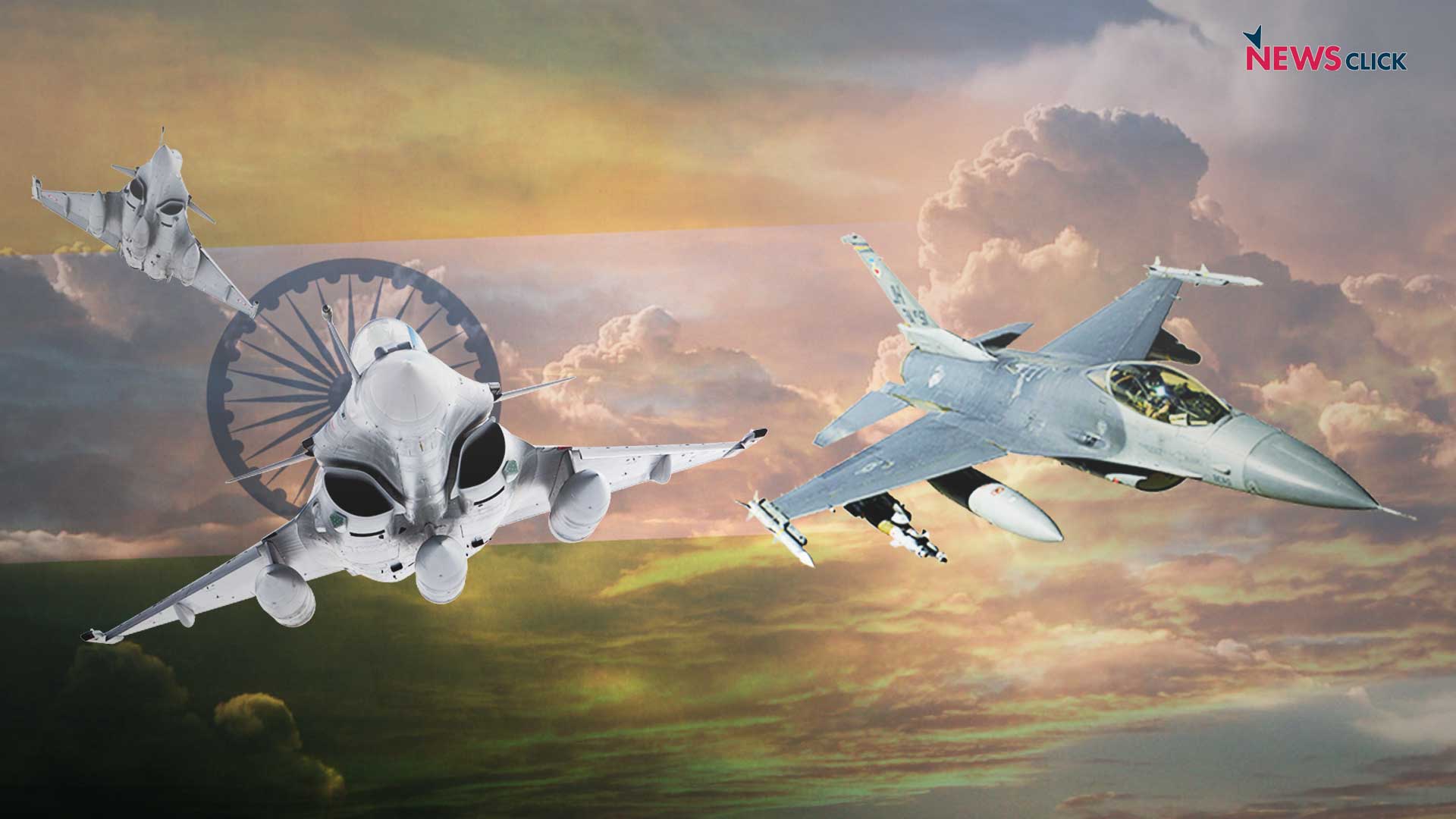 BOTH the horses in the race for India’s impending acquisition of single-engined fighter aircraft have now been officially identified, with the deal to be struck under the new strategic partnership route incorporated into the Defence Procurement Procedures (DPP) 2016. The competitors are Lockheed Martin of the US in partnership with Tata Advanced Systems for the F-16 Block 70/72, and Saab of Sweden in partnership with the Adani Group for the JAS-39 Gripen E, the latter MoU having been signed just during the past fortnight. The deal and its modalities raise a host of troubling questions.

Under the strategic partnership framework, aimed at promoting a major role for the private sector in defence manufacturing in India, foreign original equipment manufacturers (OEMs) of high-technology military platforms will link up with identified Indian partners to make, in particular, submarines, fighter aircraft, helicopters and armoured carriers or tanks. The new Chapter VI inserted into the DPP enunciating this approach says that the ministry of defence (MoD) will short-list potential Indian private sector entities for strategic partnerships in each of these categories who could then tie-up with foreign OEMs.

This short-listing of Indian firms is supposed to be based on financial strength, infrastructure, technical capability, vendor or sub-contractor network, and other such qualifications. But it would be obvious that the process leaves the door open for all manner of subjectivity, influence-peddling, cronyism or worse. This is underscored by the fighter deal.

No detailed information is available in the public domain about any short-lists that might have been prepared for the identified six categories of military hardware, nor about the process involved. How the Adani Group qualifies for being strategic partners for manufacturing fighters or any other advanced military aviation platform remains a total mystery. The Adani Group has absolutely no background in aerospace, and very little in any kind of manufacturing. When queried about this aspect, Adani spokespersons asserted that the group’s financial base and their record of handling large projects are sufficient qualification, and even referred to large business conglomerates in India entering into electricity distribution without prior background!

The Lockheed Martin-Tata collaboration for the F-16s is, of course, a formidable rival. Being an American product, the deal has powerful political backing in both the US and in India. While there were initial concerns about US President Donald Trump’s push for manufacturing within the US as opposed to outsourcing or manufacturing abroad, Lockheed has repeatedly expressed its willingness to shift its soon-to-close F-16 production line to India. Lockheed claims the Indian deal would still support several thousand jobs in the US due to manufacture of components and sub-assemblies. India’s clear political leaning towards the US, its desire to cultivate a deeper defence relationship with the latter, and its recent acquisitions of a wide variety of US military platforms making it one of India’s largest defence equipment supplier, are all factors weighing heavily in favour of the US firm. The F-16 is also the world’s most widely used fighter, tested and proved in a variety of environments. However, the F-16 is an almost 40 year old platform virtually at the end of its upgrade potential

On the other hand, by all accounts, Saab’s Gripen is a superb aircraft at the beginning of its design cycle, with potential for many upgrades and versions. Yet Saab must be feeling intense pressure from its US competitor, and must have decided that it needed something special to give it an edge. The well-known proximity of the Adani Group to the present government at the highest level of its political leadership provide Saab with that X-factor it needs to compete with its US rival. What else can explain the selection by Saab of the Adani Group, with no experience or capability in aircraft manufacturing, as its strategic partner for the Gripen offer? And what else but cronyism can explain short-listing of the Adani Group by the MoD under the strategic partnership framework?

This framework and the way it is structured paves the way for unprecedented cronyism in defence acquisitions in India. The single-engine fighter deal is expected to be worth around Rs 60,000 crores and, going by part experience, may well end up being worth a lot more. Since even the present offset regime would involve 50 per cent of the acquisition value being spent within India, the assumption must be that under strategic partnership the Indian partner and its Indian vendors would earn substantially more than Rs 30,000 crores from this deal. What a wonderful thing it must be to have such a plum offering landing in your lap without having done anything to earn or deserve it! Cronyism doesn’t get better than this!

WHAT WILL “STRATEGIC PARTNERSHIP ACHIEVE?

Be that as it may, what is the strategic partnership expected to achieve, besides delivering the contracted aircraft? In theory, the strategic partnership model is looking to set up and promote a whole manufacturing eco-system of component manufacturers, vendors, assemblers and finally system integrators for each category of military hardware, all in the private sector in India which, at present, has hardly any experience in these fields especially in aircraft. In the long run, the scheme aims to build indigenous capability to fully develop and make its own platforms.

A modern aircraft is a very complex machine, which means a large number of companies in India will have to learn a great deal and set up facilities from scratch. With the best of intentions, setting up such an eco-system for the F-16 or the Gripen will take several years. But the total production is likely to be only around 120 or 200 aircraft at the most. The IAF will also look for delivery in a short time span. There is great likelihood that, while the first few batches of aircraft deliveries will be off-the-shelf from the OEM and the next few batches would be assembled in India, only a fraction of the aircraft would actually be manufactured in India. With such a relatively small production run in a limited time, the learning curve for domestic industry will be very steep indeed.

A Lockheed representative described the possible process of technology transfer for F-16s in India as crawl, walk, run, with the run phase being a short sprint before the targeted production is completed. The strategic partnership could then end up just a shade better than an India-based assembly plant. Lockheed had set up such a facility for the F-16 in Turkey in earlier times, where the aircraft were made for the Turkish and Egyptian airlines. But this will not lead to Indian firms acquiring sufficient know-how to design subsequent upgrades or new platforms.

Saab has promised a more thoroughgoing transfer of technology, including full system control and full software control covering the source codes as well. Saab says it will not only set up a manufacturing base here for the Gripen but also help in the development of aerospace capability that will stand India in good stead over the long haul, and would also assist in developing the next version of the indigenous Light Combat Aircraft (LCA) Tejas and the Advanced Medium Combat Aircraft (AMCA), being developed and designed by the Aeronautical Development Agency.

Brazil had initially sought the Rafale, like India, but finally decided on the Gripen mainly on grounds of cost. Perhaps the lighter Gripen was also adequate to fulfill the role expected for its fighter aircraft fleet in Brazil’s specific military environment. Most reports testify to an effective technology transfer programme being run by Saab in Brazil since the order, and suggest that Brazil, which has successfully built a highly rated civilian aircraft industry with its Embraer series of passenger aircraft, is making strides to develop its capabilities in military platforms as well.

Apart from the choice India makes between the F-16 and the Gripen, many serious questions continue to hang over the overall defence procurement procedure and the new strategic partnership model.

Foremost is the issue of transparency, accountability and effectiveness of the new defence procurement system itself, which was supposedly developed and put in place to eliminate subjectivity and corruption, and promote long-term goals of the defence forces and the capabilities of the indigenous industrial base. The medium multi-role combat aircraft (MMRCA) acquisition process was among the first big-ticket orders under this new system. The sudden decision to scale down the initial requirement for 126 medium-weight Rafale aircraft to a mere 36, followed by the abrupt decision to acquire a large number of light-weight single-engine fighters, raises huge and uncomfortable questions about the integrity of the decision-making process, the rationale behind the choices made, and the relative weightage given to the different key players namely the user military service, the bureaucracy and the political leadership.

The requirement for the MMRCA was framed after thorough assessment of the requirement of the Air Force given its current and foreseeable fleet strength, and the strategic environment. Specifically, light-weight or single-engined fighters were excluded as not required, and the F-16, Gripen and MiG-35 were therefore removed from contention. Offers were invited, a short-list was formed, and extensive field trials were conducted of the two contenders, the Eurofighter and the Rafale, along with assessment of the costs involved in each case, after which the Rafale was chosen. Only for the decision to be abruptly and radically changed, the order scaled down ostensibly on grounds of cost, and the type of aircraft needed revised without any reason given. It is not clear if the Air Force is fully on board with this new decision.

With the numbers of the heavy Su-30 MkI available being low due to problems with spares and serviceability, and the Rafale order being scaled down, the IAF will now be equipped with a large fleet of light interceptors possibly depleting the strike capability of the IAF fleet. The indigenous Tejas LCA was expected to fulfill more or less the same role that the F-16 or Gripen would now be expected to play. The regrettable insistence by Hindustan Aeronautics Ltd (HAL) that it would not be able to make and deliver more than a very low 12 aircraft per year may have played a role in prompting this decision. But a special effort at augmenting the production, and building a component manufacturing eco-system, could have been an alternative solution, but was it considered? The question remains: who took these decisions, how and why?

Is strategic partnership really a way out or will it perpetuate dependence on foreign players? Build an indigenous military aircraft industry based on domestic private sector players with little experience and capability runs many risks. Expensive manufacturing facilities set up for just limited numbers of one specific aircraft would have only a short life span. This would inevitably put pressure on the government to somehow help sustain it after expiry of the first order, thus creating a vested interest in serial production of platforms irrespective of actual need, and with continued dependence on foreign OEMs. Finally, why are defence PSUs excluded from the scheme of things, and why should building up their already considerable capability and experience not be an important goal?

The new raksha mantri will face several stern tests when she oversees the final decision on the acquisition of single-engine fighters and the unfolding of the private-sector focused strategic partnership model.