The new NDA Government’s approach to every issue, irrespective of the problem, seems to be the same – hand it over to the private sector. Not surprisingly, the “expert” committee’s review report on the ambitious National Optic Fibre Network (NOFN) project — which is to provide broadband rural telephony — has recommended exactly that. Instead of BSNL, virtually the only telecom company providing rural telephony today, the Committee has recommended large scale induction of private players. This is in spite of their dismal record in meeting their existing rural telephony obligations. The Committee has also suggested radical technical and administrative “restructuring” of the project that will increase its capital cost by more than two and a half times, and a time overrun of at least two years. To justify these increases, it uses fictitious figures of “benefits”, which can be shown to be either imaginary, or crude arithmetic manipulations.

The National Optic Fibre Network (NOFN), envisaged to be the backbone of the country’s broadband infrastructure, is central to the ambitious program of providing e-governance and other government services to Indians, and connecting 250,000 Gram Panchayats to the internet. The cost of the network was estimated at Rs. 28,000 crore, with the bulk coming from the Universal Service Obligation (USO) Fund, which has a reserve of nearly Rs. 40,000 crore. Another Rs. 6, 782 core is required to implement the user network – e-governance and various other services such as health, education, and land records that will ride on top of the network.

The NOFN was also to provide non-discriminatory access to all telecom players, both public and private, to provide broadband services over their networks.

The NOFN project is obviously way off the mark in meeting its target of connecting the Gram Panchayats. By mid-2015, it had chosen the architecture of the network and the technology to be used, and managed to connect only 2,000 Gram Panchyats in 5 states. This was one reason the expert committee was set up to review the progress of the project.

But the expert committee did not examine the reasons for this delay. The most important reason for the delay has been that the Union Cabinet took more than 2 years to release the initial funds for BBN. Right of Way issues and delays in the release of tenders for cables and trenches by BBN compounded the problem.

Rather than focus on these issues, the committee reopened the architecture and technology chosen by NOFN. Without a major change in architecture and technology, it would be difficult to recommend what the Committee evidently wanted, that the private sector should be inducted into the project. This would then help to syphon off a major share of the Rs. 40,000 crore USO Fund earmarked for the project to the private sector. The problem for the country is that such a change in technology will result in a huge increase in costs of the project and delays due to laying three times the fibre optic cable as originally envisaged.

Consider the composition of the Expert Committee. It had two past presidents of NASSCOM, the private sector body for the IT industry, three ex and serving bureaucrats, two professors who have very little telecom background, and one serving officer from Department of Telecom. What was generally missing from the expert committee was expertise on the specific subject.

The most important recommendation of the Committee was a complete change in the architecture of the network. In the original architecture, the fibre optic network was to have ring structures at the District and Block Headquarters levels, and a radial structure to connect the Block Headquarters and the Gram Panchayats; the Gram Panchayats were not directly connected to each other. This makes sense as the flow of traffic between Gram Panchayats is low, and the existing BSNL fibre network can be used for a major part of the proposed NOFN infrastructure. Also, it was possible to choose Gigabit Passive Optical Network (GPON) technology, indigenously developed by CDOT and licensed to six Indian vendors.

A change from a radial to a ring architecture below the block level – connecting the Gram Panchayats directly through such a ring network – has significantly higher cable laying requirements, and so much higher costs.

Based on the ring network architecture for the Gram Panchayats, the IP-MPLS system has been recommended instead of the GPON technology. Replacing GPON by IP-MPLS will not only be a setback to developing indigenous technology; it will also be a major loss for BSNL and the Indian vendors, all of whom have made large investments in this technology. IP-MPLS has also a higher power consumption than GPON, significantly increasing power back-up costs.

There is more sleight of hand to cook up figures. The committee has increased the number of fibres in the cables to be laid without any analysis of this requirement. Adding this extra capacity when there is no demand of this magnitude, seems to be an exercise merely to fabricate figures to show some spurious advantages for the revised architecture.

The capital cost of the changed architecture is Rs. 72,778 crore, an increase of 2.6 times from the original estimate of Rs. 28,000 crore. To justify this increase, the Committee has tried to combine capital and operating costs. This has meant manipulating the figures to show a higher operating cost of the original architecture. By assuming a higher number of fibres to be used, the Net Present Value (NPV) of such costs (leasing additional fibres) has been inflated from the actual Rs 18,122 crore required to Rs. 50, 582 crore . As if this was not enough, the Committee decided to fraud the Net Present Value of the operating costs of the new architecture as well. Against an annual cost of Rs 3,639 crore for 10 years, it calculates a Net Present Value of only Rs. 5,734 crore, when the correct figure for NPV should be about Rs. 24,557 crore.

If we take corrected figures for the NPV of the project, we see that the original project cost is Rs 52,904 crore. After the architecture and technology changes are taken into account, the revised cost is Rs. 97,335 crore, a doubling of cost for no tangible benefits.

Even after all this cookery, the Committee is unable to justify the new architecture in terms of costs. It makes arbitrary projections of additional internet users due to the new architecture; calculates a mythical increase of 0.21% in GDP; then claims that the entire costs of the project will be recovered in one year! This despite the same committee admitting that telcos, ISPs and MSO say there is no business case for rural areas. The committee’s claim of a dramatic increase in GDP is only to justify higher investment in the project, now renamed as Bharat.Net.

The Committee has recommended that a large part of the NOFN project be taken away from the public sector undertakings BSNL, GAIL and RAILTEL, and handed over to private players.

After bifurcating the project between central PSUs and the private sector, it may appear that the PSUs still have more states. But in terms of geographical region, the majority of lucrative areas have been allocated to the private sector. In contrast, most of the states earmarked for the central PSUs have difficult terrain, low teledensity, and/or contain large number of disturbed areas; they are, in other words, hard states.

The revenue earning potential will obviously be much lower in hard areas. However, the revenue share arrangement, the Service Level Agreements (SLAs) and penalties remain the same for “normal” areas and “hard” areas. The arrangement clearly stacks the deck against the PSUs. 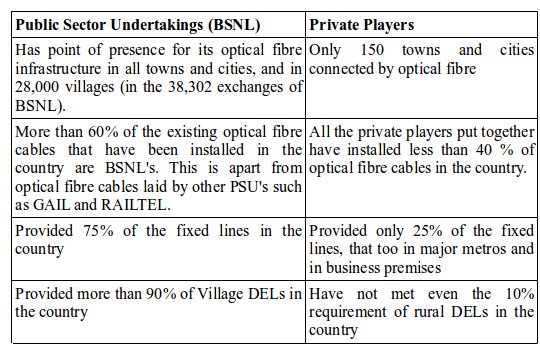 The recommendations of the Committee will lead to laying of three times the fibre optic cable as originally envisaged — 17,11,000 km of fibre optic cable instead of 5,75,000 km — with very little added benefits. This will raise the cost of the project significantly. The Committee has claimed that the whole project will be commissioned within the next 18 months (September 2017), including the laying of the additional optical fibre cable, installing the necessary hardware, and providing the last mile connectivity to the Gram Panchayats. This is simply impossible.

Finishing the project in the next 18 months was in any case a difficult target, even without such a drastic change in the structure of the project. The Committee is trying to fool the people by claiming that even after such a major restructuring, the NOFN project can be finished by September, 2017. The real objective is to help the private telecom players to loot the USO Fund and finish off BSNL, the only telecom company that provides rural telephony today.