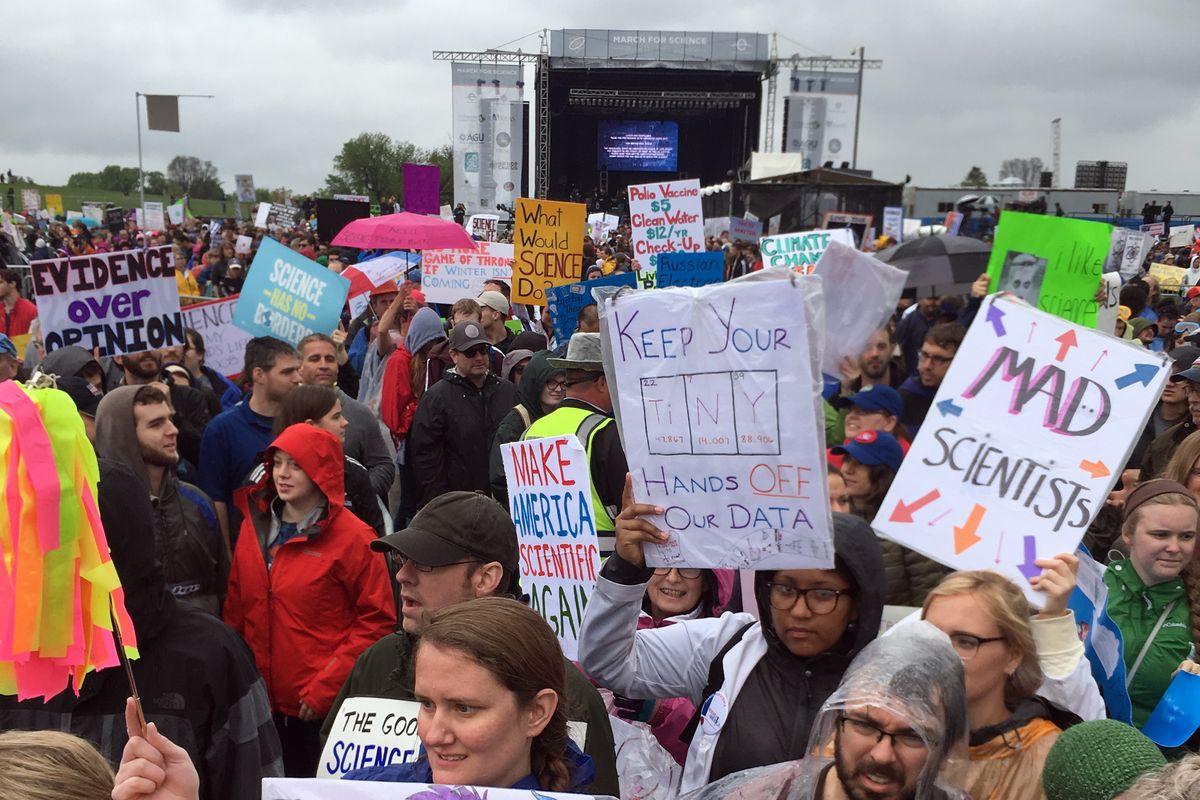 Earth Day, commemorated on 22 April each year, has always seen marches and demonstrations highlighting dangers to life on the planet and mobilizing people for the defence of the environment from wanton exploitation and profiteering. Earth Day this year was different. It saw rallies in cities round the world, especially in the US, under the banner March for Science. This year Earth Day was not about saving the planet, but about saving science and the institutions that engage in studying and propagating it. Who would have thought such a thing would happen? And who could have imagined that such a movement would be needed, and this need be felt by so many working scientists, students and researchers, who would normally not venture outside their laboratories and classrooms, and be joined by activists and common people everywhere?

The initial impetus came from a series of exchanges on social media, mainly in the US, voicing concern about Candidate and later President Trump’s open denial of climate change which he repeatedly termed a “fraud”, and the series of steps taken by the Trump administration to essentially eviscerate the Environment Protection Agency (EPA). Trump appointed one of the EPA’s fiercest critics, Scott Pruitt, with close ties to the fossil fuel industry, to head the Agency, and ordered a 25 percent cut in the EPA’s budget including a 40 percent cut in its science budget. Pages related to climate change were removed from the EPA website. Scientists in the EPA and other scientific and advisory bodies were cautioned against making any public statements without clearance from the political executive. Executive orders by Trump rescinded scientific reports which underpinned major environmental and public health measures such as relating to automobile fuel efficiency, curbs on coal mining, protection of water bodies from pollution etc, indicated a clear trend that sent alarm bells ringing. Similar attacks on the National Institute of Health soon followed. Some scientists suggested a March, the issues found echoes around the world, and the call snowballed into a global movement of scientists.

On April 22, hundreds of thousands of scientists and supporters took to the streets in over 600 towns and cities across the world. Marches were held in most major US cities as well as in London, Dublin, Sydney, Berlin, Tokyo, Kampala, Quezon City in the Philippines, Blantyre in Malawi, and even in Greenland.

Slogans and placards clearly highlighted the threat not only to public spending on research and scientific institutions, but to the very method of science and to science-based public policy formulation. Slogans such as “Evidence not Opinion,” and “Keep your hands off our Data,” underscored the fact that in the US as well as in many other countries around the world, commercial and political considerations were gaining dominance in a variety of policy-making theatres over scientific analysis and verified data. Anger at this growing tendency was illustrated by banners reading, “We were mad scientists, now we are furious.”

Organizers especially in the US were concerned that the March ran the risk of being seen as a partisan, anti-Trump mobilization. So they took pains to emphasize in campaign literature and websites that while they were opposing specific actions of the Trump administration, the tendency of opaque decision-making through collusion between closed political elites and the corporate class ran through governments of different dispensations. The main March website therefore stated: “Anti-science agendas and policies have been advanced by politicians on both sides of the aisle, and they harm everyone “” without exception. Science should neither serve special interests nor be rejected based on personal convictions. At its core, science is a tool for seeking answers. It can and should influence policy and guide our long-term decision-making.”

While being wary of being cast as partisan activists with a bias, an agenda, scientists in the Marches were also conscious that the time had come to stand up and be counted. The sharpness of the attacks themselves propelled action, as one placard proclaimed: “So severe, even the nerds are here,” In a sense, the March may be seen as the beginnings of the crystallization of a distinct identity of scientists as activists in so many countries. Like all embryonic movements, this is exhilarating stuff. Question is will it last? And what directions will it take?

Science and its benefits

Many placards at the Marches hailed the benefits bestowed by science. One said: “Do you have polio? Neither do I. Thanks to science.” Others drew attention to Velcro, spectacles, tooth fillings, cell phones and computers.

In the twentieth century, till the second world war, science and technology seemed to bring unlimited benefits. Electricity, anti-biotics, radio and TV, the telegraph, airplanes, X-rays, and so on. It seemed there was nothing science could not achieve, and science could solve any problem and benefit humankind as a whole. Then came the nuclear bomb, revelations of the health and environmental dangers posed by pesticides, huge industrial disasters such as in Minamata and Bhopal, the Fukushima meltdown. Many movements around the world began to perceive science itself as the problem, and genetic modification in agriculture, nanotechnology, and robots as inimical to the future of humankind. Many public intellectuals, including in India, proclaimed science itself as a western philosophy intrinsically oriented against nature and hence against humankind. These tendencies are very visible today, sometimes at the very heart of what otherwise seem to be radical movements.

In light of this tendency, could the March for Science be a remarkable turnaround? Will this movement of scientists be able to engage with and change the mindset of many activists who see science itself as an enemy?

Even with respect to climate change, which was in many ways the main trigger for the March, many activists believe science and technology themselves are to blame for the crisis. Such activists argue that even looking for alternatives for producing electricity or powering automobiles or reducing emissions from agriculture are false solutions, continuing to use science in the search for answers even though it caused the problems in the first place. Instead, answers should be sought in alternative philosophies and lifestyles in which science does not have a major part to play. On the other hand, others would argue that it is science that indeed first brought climate change to public attention, and continues to improve our understanding of the problem, its many causes and impacts, and helps us to work our way to overcome the crisis, including an understanding of how society is organized, how the political economy operates, how science is shaped and its priorities determined. Would the scientists involved in the March agree with the latter view? Would the defence of science also extend to a deepening of understanding about the role of science in society, and a better understanding of the forces that shape science?

After the March, several commentators have drawn attention to the subdued response among scientists in India who have, not unlike their counterparts in other countries, traditionally refrained from getting involved with wider societal issues including science-based formulation of public policy.

Scientists in this country have long been content with placing their viewpoints, however true to their own scientifically-founded view, before the political and bureaucratic leadership and then letting the decisions be taken by the latter according to their perceptions and preferences. Except for the first few years after independence, India has perhaps never given due importance to scientific and evidence-based policy-making which has always been guided more by political, business and corporate interest groups.

This is ever more evident under the current dispensation. Numerous environmental regulations and mechanisms have been sidelined or actually done away with either formally or on de facto basis. The culture, however weak earlier, of conducting serious studies, seeking feedback and using these as basis for policy-making has virtually been abandoned. When Ministries openly declare that they will frame and fund research subjects designed to being out the success of government policies and programmes, what value will researchers and academic institutions attach to independent, evidence-based study?

In the US, outright falsehoods emanating directly from the President or the White House are claimed to be “alternative facts.” Here in India, when a Hindutva leader is confronted with facts challenging proclamations about the population of one community growing at many times the rate of the majority community, or about a supposed exodus of the majority community from a district in UP, the leader responds that “perceptions are more important than facts.” Mythology passes for history, beliefs of Ministers rooted in mythology passes for knowledge about science in ancient India, suspicion about the kind of meat someone is carrying passes for proof of it being beef, no evidence required for anything. Much more than a March for Science is required in this country.