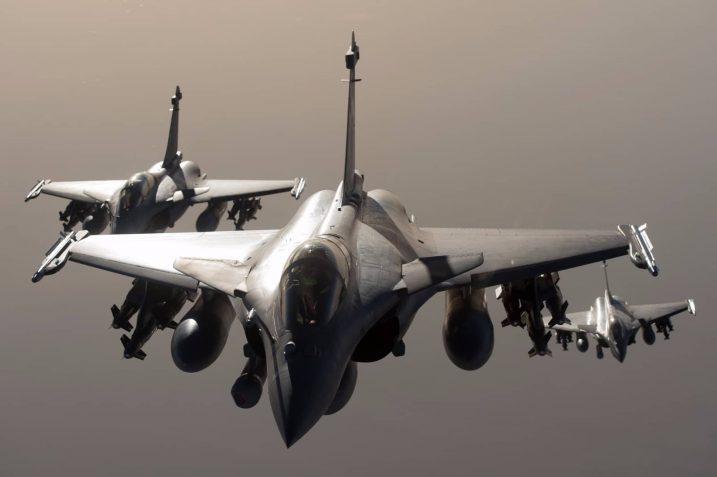 ON October 8, 2019, in Dassault’s plant in Merignac in the south of France, Raksha Mantri Rajnath Singh personally took delivery of the first of the 36 Rafale multi-role fighter aircraft India had acquired from France in 2015-16, the latter year being when the deal was signed. The handover was, of course, mostly symbolic since the first 4 Rafale fighters would arrive in India only in May 2020, while the first full squadron of 18 fighters would hopefully be available in India only in mid-2021 and the remaining 18 more than a year later in April 2022. Meanwhile, batches of IAF pilots and maintenance crew would be trained at Dassault itself. The famous India Specific Enhancements (ISE), the “special” technologies added only for the Indian Rafales and for which India paid a whopping additional Euro 1.3 billion, would also start being incorporated only after that. Around that time, India is looking at the very real prospect of the IAF fleet strength dropping to 26 squadrons compared to the planned and sanctioned 42, by when one neighbour, Pakistan, would have boosted its fleet to 25 squadrons, and there is of course no real competition with the other neighbour to the north.

One is therefore left wondering what raksha mantri meant when, in his speech upon receiving the first Rafale in France, he said these two squadrons of Rafale when fully inducted “will boost India’s air dominance exponentially to ensure peace and security in the region.” IAF’s so-called air superiority in the region is itself today open to question, and so “dominance” is particularly inappropriate. And whereas the Rafale certainly provides an element of qualitative advantage, a mere 18 fighters on each of the two fronts will scarcely make up for the sheer lack of numbers.

No wonder India’s defence minister performed shastra puja or weapon worship of the new acquisition, along with the folksier version of crushing lemons under its wheels (see photo). It is to be hoped that these prayers somehow do the trick. Because, as these columns have earlier repeatedly pointed out, the Modi government had invoked “critical operational necessity” in 2015 to suddenly and abruptly terminate the tender for 126 fighters won by Rafale and, for unexplained reasons, instead entered into a government-to-government deal for just 36 fighters, leaving the operational imperative unmet and the IAF still in dire straits.

Indeed, all the questions regarding l’affaire Rafale then raised by defence experts, several retired senior military officers and bureaucrats, media commentators and others, persist unanswered even today and continue to haunt the nation. The Supreme Court, which received some information from the government in a sealed envelope and, without sharing it with opposing litigants, pronounced judgement in favour of the merits of the deal despite the many anomalies pointed out and the questionable procedures adopted, leaving the country baffled and allowing the government to complete evade accountability. The controller and auditor general (CAG) buried much revealing information beneath a thick coat of whitewash, kept vital cost figures, whose examination and publication is its very raison d’etre, from Parliament and the public. These developments have imperilled the country’s security, perpetuated India’s shameful dependence on defence imports, and undermined both accountability of the government and public confidence in constitutional bodies.

The government may have deluded itself into believing that the serious concerns about the Rafale deal have receded after its election victory. This is far from the truth. All the old questions remain, and four in particular are repeated here to keep public memory fresh.

The most obvious lapse is the one touched upon above. The IAF, after prolonged consideration and planning from 2001 onwards , itself a rarity in a long history of adhoc and piecemeal procurement resulting in a crazy mix of myriad aircraft types, decided in 2004 to acquire 126 multi-role combat aircraft (MRCA), then refined the choice in 2007 to medium-weight fighters (MMRCA) on the sound basis that the future IAF fleet would comprise essentially three aircraft types viz. the indigenous Tejas Light Combat Aircraft (LCA), the MMRCA and the heavy air superiority Sukhoi-30 MKI, with a possible induction of the Indo-Russian Fifth Generation Fighter Aircraft (FGFA) down the line.

After extensive assessment of the six contenders for the tender, field trials were conducted involving the two short-listed fighters, the Eurofighter Typhoon and the Dassault Rafale, under different conditions obtaining in India. The Rafale was selected in 2010 as L1, meaning the lowest bidder among contenders. The notorious Indian bureaucratic wrangling and byzantine decision-making then ensued, and bogged the final negotiations down, but more about procedural issues later.

Of relevance here is the fact that the “decisive” Modi government which had by them come to power intervened and “solved” the tangle, in the face of mounting pressure by an increasingly anxious IAF, by scrapping the tender and entering into a government-to-government deal with France for the same winning aircraft, the Rafale. The big mystery, however, is that the numbers required were magically reduced from 126 to 36 fighters, leaving the IAF woefully short. Where does this shortfall leave the IAF and India’s defence preparedness? Was all the detailed fleet planning worth nothing? Whatever the IAF’s feelings about all this, they could only swallow it.

One reason obliquely suggested was that the deal was proving too expensive. Was this not known to the IAF brass and all those senior Defence and Finance Ministry bureaucrats for all those years when the tender was in progress?

Then, equally suddenly in 2016, perhaps in response to Air Force and expert disquiet about the depleted fleet strength, a Request for Information (RfI) was floated for 114 MRCA, without any weight specifications. Surprise, surprise, the same 6 contenders re-applied! Would the evaluation process throw up new results? Does that mean the choice of Rafale was flawed? Or did this mean that a light fighter would be chosen, which may cost less? If so, then what happened to all the detailed fleet planning? What about the duplication in weight-class with the LCA? If cost was the only consideration, then why not 100 more Sukhois? And will not a fresh acquisition mean even more delays, while the IAF fleet keeps shrinking? And what happened to the talk of acquiring another 36 Rafales, despite an option clause having been earlier turned down?

No answers from the government, only prayers!

NO SELF-RELIANCE, NO FREEDOM FROM FOREIGN DEPENDENCE

The abrupt change of tack by the Modi government in reducing the Rafale order size from 126 to 36, also robbed the country of the opportunity to build its own capability through transfer of technology from Dassault to Hindustan Aeronautics Ltd (HAL) for manufacture in India of 108 Rafales as originally envisaged. The Modi government advanced numerous specious arguments, including denigrating the country’s leading defence manufacturer, as to why manufacturing by HAL would not work out. And all this while touting its “Make in India” programme! If it felt HAL’s performance was sub-par, steps could have been taken to ramp it up. If HAL’s costs were too high and productivity too low, government could have stepped in with investments to assist in re-tooling or upgrading machinery.

But government chose to simply dump HAL despite a work-share agreement between HAL and Dassault having been agreed. Instead, it came up with an astounding alternative suggestion, namely to rope in the totally inexperienced, virtually bankrupt, Anil Dhirubhai Ambani Group’s Reliance Defence, with a horrible track-record of running projects into the ground, as an offset partner of Dassault. Reliance Defence would stand to gain tens of thousands of crores from its major share of the offsets of 50 per cent of the Euro 7.87 billion Rafale order. No technology for the Rafale to be gained by India, though, for Reliance Defence would only manufacture components for the Dassault Falcon 2000 civilian executive jet!

Even leaving aside the obvious cronyism involved, and the numerous pointers to underhand dealings, such as the Dassault-Reliance deal being signed even before the Rafale deal or lack of rational explanation for Dassault “selecting” the hugely underperforming Reliance Defence, the Modi government simply does not seem to understand the rationale for building indigenous technological capability, especially in the defence manufacturing and R&D sector.

Even at the Rafale hand-over ceremony and when interacting with French defence industry officials, Raksha Mantri Rajnath Singh implored French defence majors to invest in India, set up manufacturing facilities here including for export, and participate in the “Make in India” effort. The entire ruling establishment seems unaware of the fundamental mistake and irony of a supposedly muscular ultra-nationalist government thinking that foreign manufacturers setting up base in India would help in reducing imports and hence dependence on foreign companies! Is being dependent on Dassault based in Merignac any different from dependence on Dassault in Nagpur or Hyderabad? Will India gain any technology and autonomous capability from such arrangements? Forget answers, the Modi government is not even asking these questions!

DEVIL IN THE DETAILS

There are the numerous detailed questions relating to the actual deal itself. Why was sovereign guarantee not obtained if it was a government-to-government deal? Why was the offset clause of the Defence Procurement Procedure amended in 2016 to allow Dassault, and others, to file Offset claims three years after the deal is signed, thus depriving the government of any say in the content of the offsets, crucial for realizing the objective of offsets, namely to gain technology not just money spent in India as is mistakenly portrayed? And why did India agree to pay so much for the 14 ISEs, most of which CAG characterised as routine and which were, in any case, supposed to be part of the basic aircraft according to the tender? And if this additional payment being paid to Dassault was factored in, would that not make Eurofighter L1? What does that say about the integrity of the deal itself?

There are simply far too many questions left hanging in the Rafale deal. Government has not been forthcoming with any answers, leading to the obvious question, what are they hiding? Why is the Supreme Court so reticent to even look into things? Why has CAG suddenly become so timid, redacting cost figures? More questions, and till answers come, speculation will undoubtedly abound.

India Receives First Rafale, Questions Unanswered
Raghu
More on Rafale CAG Report: Between the Lines
D. Raghunandan
CAG Report: A Poor Defence of the Rafale Deal
Prabir Purkayastha
Remembering the Republic, Planning and Science in the Times of Unreason
Scroll back to top