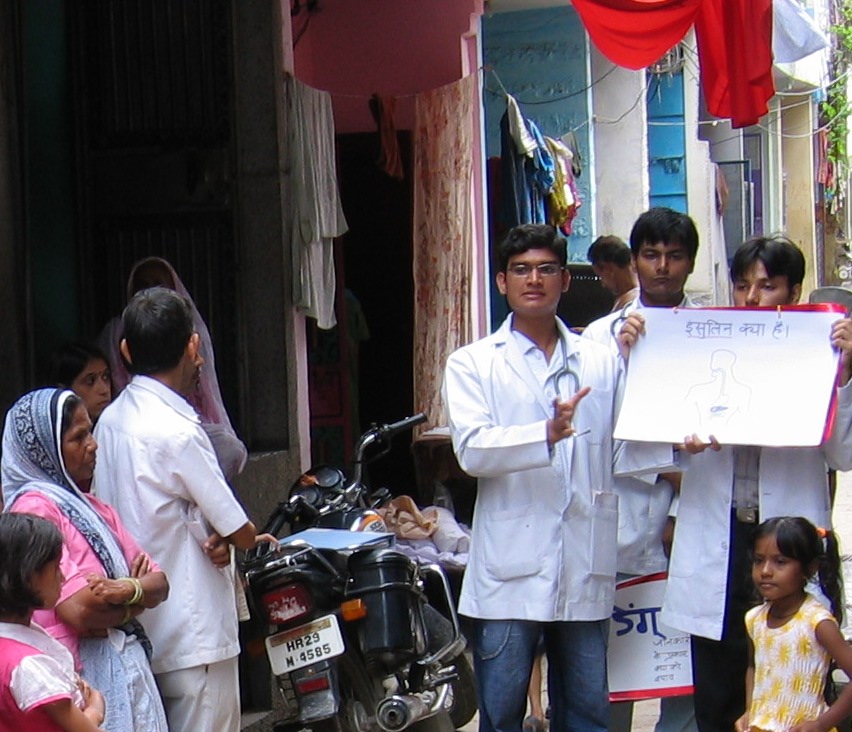 In India, as well as in many developing countries, there is wide acceptance that the present health care system needs serious reforms. There is, however, very limited consensus on the shape and extent of reforms that are necessary. Universal Health Coverage (UHC) has become a buzzword in health and development sectors, and is being proposed as the solution. The catch lies in the fact that there is no real consensus on what UHC really means. Proponents of UHC schooled in neoliberal economics propose that UHC is all about securing finances for health services, and in allowing a form of insurance based delivery of services. UHC models being proposed and in many cases, being implemented, often appear to be premised on an understanding that if finances can be obtained the delivery of services will take care of itself. Further, in many situations it is proposed that given the existing preponderance of the private medical sector in many countries (like in India), it is logical to allow a major role for the private sector.

What this debate entirely misses is that there are extremely important reasons why public provision of health care services has distinct advantages over private provision, even when through an insurance based model the cost of care is borne by the government. This is a debate that is being played out in the case of the Rashtriya Swasthya Bima Yojana (RSBY) at the national level and in state level schemes such as the Arogyasri scheme in Andhra Pradesh.

The unquestioning faith in the ‘efficiency’ of private health services is related to the complexity in measuring the quality and efficacy of health services. Usual measures of health outcomes – e.g. child mortality, life expectancy, etc. – cannot be linked directly to healthcare services, as they often depend more fundamentally on other determinants of health (poverty, nutrition, employment, environment, gender roles, etc.). In fact, evidence suggests that most of the continuing gains in life expectancy in the developed capitalist world have come from a continued deepening of preventive practices, such as better housing and hygienic conditions in habitations, availability of safe drinking water, improved sanitation and sewerage disposal facilities, etc. In contrast, a modest 10-15% is thought to be attributable to health care. Further, existing measures of health coverage (and thereby the efficiency of services) tend to focus on de jure rather than de facto access to services, or simple counts of the number of people incurring particularly high healthcare expenses.

Another common method of measuring ‘efficiency’ is by quantifying subjective perceptions such as ‘patient satisfaction’, ‘behaviour of health workers’ and collecting crude criteria such as waiting times at clinics and hospitals. Such measures often place public health services at a disadvantage as private care providers are more adept at addressing these concerns, although they may not always be relevant as regards the actual quality of care. Patients, on the other hand, are rarely in a position to correctly judge the quality of services, given the huge information gap that exists in the case of medical care.

Where is the evidence?

Finding evidence to assess the impact of primarily insurance based schemes (which can often be publicly funded but care provision is through private providers – as in the RSBY scheme in India) is particularly difficult and methodologies designed to collect good evidence are generally lacking. Many evaluations of UHC schemes end up measuring the impact on ‘out-of-pocket’ expenses incurred but do not measure the quality and depth of services offered. As a consequence, the evidence base to show its positive impact on health outcomes remains extremely thin, with huge methodological challenges. For example, some evaluations of the much acclaimed ‘Seguro Popular’ scheme in Mexico reported no effect on self-reported health indicators and did not report change in general patterns of service use.

The most basic argument for pooled financing and insurance (the hallmark of UHC) is that it reduces financial risk. However, insurance also opens up new opportunities for consuming expensive high-technology care that permits health improvements that are valued by the patient – especially since the private provider is able to exploit its informational advantage. It is still an open question, however, whether insurance (of any form) reduces financial risk. A large 2005 study of China’s health insurance schemes indicates that it may, to the contrary, be associated with increased risk of large out-of pocket payments. Further, there is virtually no data that compares the relative merits of approaches that are premised on predominant public delivery of services versus those that follow a private-public mix with predominant private sector delivery of services.

There are, however, clear structural reasons why market-driven health care and competition do not in fact promote efficiency or quality. Market competition does not make for better care as most patients neither have enough knowledge to make informed choices about the relative quality or merits of different healthcare providers, nor are they able to assert any right to negotiate on price and quality, especially when care is urgent, when sickness results in vulnerability, or when illiteracy and poverty are prevalent – a situation called information asymmetry in the health care ‘market’.

Commercialized healthcare systems often have very high transaction costs that are necessary to manage or regulate the market. Similar issues arise in the management of public contracts with private providers, especially with those motivated to maximize income by manipulating data. To counteract this, large amounts of money need to be spent on systems designed to catch out contracted providers in a ‘cat and mouse’ game of detection and deception.

A 2003 study calculated the administrative costs involved with insurance overhead, employers’ costs to manage healthcare benefits, hospital administration and costs incurred by practitioners (e.g. billing), and administrative costs of long-term care facilities in the US. The study estimated that in 1999, as much as $294.3 billion was used for administrative costs, representing 31.0% of healthcare expenditures in the country. Transaction costs tend to be much lower in more public systems, for example the transaction costs in the National Health System of the UK in the mid-1970s, before it began to be converted into a market, were estimated at between 5 and 6% of total expenditure.

Public systems are more efficient also because they ensure economies-of-scale in the purchasing, supply and distribution of drugs and equipment. In Tamilnadu, for example, pooled purchasing of medicines as undertaken by a public sector entity has driven down medicine costs significantly and other states are engaged in duplicating the model.

National or district-level public health systems for administration, staffing and training are able to reduce management costs of multiple private providers. Provision at scale also enables specialization: a full range of products and services can be offered at a lower cost than if provided by individual operators. Public systems are best placed to avoid wasteful capital investment, duplication of equipment and services, and an emphasis on frills that are far too common in private hospitals in a competitive market environment. These are avoided when hospitals provide only what they need to, rather than add-ons that will give them an edge over the competition.

Public systems also perform tasks that are not directly linked to providing care. These include maintaining disease surveillance systems, providing immunization to the entire population, vector control measures, health promotion activities such as ante natal and school health check ups, etc. A public system that integrates these functions with health care delivery is best placed to secure better health outcomes. Public health is based on systematic applications of the most suitable technologies applied at population scale and systematic monitoring and data collection. For instance, vaccine coverage must be comprehensive in order to achieve herd immunity in the community or disease eradication, depends on universal protection applied systematically and rigorously. Even the control of communicable diseases not currently close to eradication, such as malaria, will often be characterized by mass action benefits if coverage levels are very high.

It can be argued that an array of private providers could offer the public health services mentioned above if robust regulatory mechanisms impose conditions that mandate private providers to do so to ensure high levels of coverage of vaccines and immunization among their patients, to provide preventive health services at the community level, emergency services, and the like. In practice, however, public goods such as mass coverage, public awareness, community outreach, and emergency services are more effectively provided through public programs rather than the sum of highly regulated private programs. Poor people may have formal access to public health services, but unless there is outreach into their communities — that is best ensured by an integrated public system rather than fragmented private programmes (such as through the deployment of trained community health workers) — they might in fact not be able to get reliable access to such services.

If health systems are to provide care to a whole population, there are significant marginal costs involved in delivery to the most inaccessible or the most disadvantaged sections of the population. The costs of delivering care to geographically remote or sparsely distributed populations can be much higher than the concentrated delivery of care in urban settings. Provision of health services for those with pre-existing chronic conditions is often relatively more expensive as is the treatment of rare diseases. For example, data from Ontario (Canada) suggests that 1% of that province’s patients – most of them elderly with multiple chronic conditions – consume 34% of all health-care spending and almost 50% of all hospital and long-term care costs. This is not an isolated instance; in rapidly aging societies a very high proportion of healthcare needs are concentrated in the last few months or years of life. Public systems can absorb these marginal costs and spread it across an entire population. Private systems, on the other hand, would find such costs to be unacceptable and would attempt to avoid care provision to people who live in underserved areas, who are disadvantaged, or those who suffer from conditions that require expensive care or long-term care. Public systems, thus, promote equity while even the best designed private systems risk undermining it. Finally, competition harms collaboration between different providers, often an important ingredient of good quality care, especially in relation to referrals between different kinds of specialists or between different levels of the healthcare system. Groups of private providers often work in cartels and referrals are determined by commercial considerations.

The argument that health systems in LMICs should leverage the already-dominant private sector is clearly misplaced. If the public sector is nearly moribund – because it is deeply under-funded – the private sector will fill up the space ceded. The large out-of-pocket expenditures and private provision in low-income countries is mainly a reflection of the paucity of public services, especially for the poor, forcing the middle and upper classes to go directly to private providers, while the poor are left without reliable basic services. This reality is unfortunate, and not a convincing case for private provision, but rather should serve as a call to action to bolster the deeply under-financed public sector (Sachs J D, Achieving universal health coverage in low-income settings, the Lancet, Vol. 380, September 8, 2012).