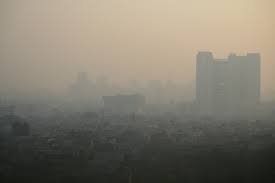 After Delhi hit the news becoming the most polluted city in the world, the Supreme Court, the National Green Tribunal (NGT) and the Delhi government have all got into the act. Diesel vehicles are the obvious target, the prime reason why Delhi pollution levels have increased so alarmingly in the last few years. The Supreme Court has now taken over the legal cases from all other bodies including the NGT, and has given a set of directions including the stopping of registration of diesel vehicles in Delhi above 2000 cc engine size, and banning the entry into the city of goods vehicles transiting through Delhi.

Bodies such as Centre for Science and Environment (CSE), Delhi Science Forum and others have been flagging the issue of air pollution from diesel vehicles for years. They have been pointing out that small particulate matter, particularly below 2.5 micron size (PM 2.5) and Nitrous Oxides (NOx) omissions are much higher for diesel vehicles and these are dangerous to health. Increasingly, health and air quality experts around the world have been concerned with the rise of pollutant levels in towns and cities, particularly from diesel vehicles. Last year, International Agency for Research on Cancer (IARC) of WHO classified diesel exhaust as a Class 1 human carcinogen. Diesel cars are now held to be the key culprit in increasing deaths and respiratory illnesses around the world. Therefore, Delhi’s air pollution issue is part of a much larger worldwide concern regarding diesel vehicles.

Why is diesel worse than petrol as a fuel when it comes to air quality? Diesel engines have higher efficiencies than petrol engines, but this comes at a cost; they burn fuel at a higher temperature causing higher NOx production. The NOx levels for diesel vehicles are significantly higher than petrol engines. Under Bharat Stage IV (BS IV) standards, roughly comparable to European Union IV (EU IV) standards, diesel vehicles are allowed to emit 3 times more NOx than petrol cars. They also produces very fine particles – PM 2.5 – that lodge into our lungs. Petrol engines produce negligible amounts of such particles, and therefore most emission standards do not include PM 2.5 targets for petrol engines.

Cars in major Indian cities are supposed to meet BS IV standards, while the rest of the country is still under weaker BS III emission standards.

Under EU VI standards, the emission levels from diesel and petrol vehicles are comparable. Many have argued that imposing EU VI standards in India would help solve the problem. Unfortunately, there is bad news from EU on this. It has been found that that under road conditions, vehicles produce at least 7 times more NOx than when the vehicles are stationary, test conditions. And this is not restricted to Volkswagen (VW) alone, who “tweaked” their software for passing emission tests, but also other major European brands. The incorporation of on-road testing in the EU standards is now proposed to be 2017. However, manufacturers have asked time till 2020 for this, with doubts being expressed whether they would be ready even by then. It appears that diesel technology itself has problems, and we need to reexamine the case for introducing diesel for private vehicles, as has been done in the last few decades in various parts of the world.

The two regions — India and Europe — have introduced private diesel vehicles in large numbers in the last two decades. The reasons are quite different in the two cases. In India, there was a huge lobby that essentially wanted the “subsidies” on diesel and kerosene to end, and their prices to be brought on par with petrol. This is in disregard of the reasons why these fuel prices were kept low in the first place, that diesel is used for socially important sectors such as transport of goods, agricultural pump sets, mass transport, etc., and kerosene is the poor man’s fuel, This lobby saw the differential prices of fuels as a part of the larger subsidies to the poor, something that they wanted to do away with. This was the neoliberal paradigm of taxing the poor and subsidising the rich.

What is hidden in all these discussions on subsidy for diesel is that the price difference between diesel and petrol has more to do with high central taxes than any actual subsidy. The so-called subsidy is due to imposing high taxes on all hydrocarbon fuels, then recycling some of it back, and calling it a subsidy. For example, first tax all fuels say by Rs. 25 per litre, then give a “subsidy” of Rs. 10 for diesel by giving back Rs.10 from the Rs. 25 that has been taxed. It still leaves a tax of Rs. 15 on a litre of diesel, but by this sleight of hand, the government can now say that it is giving a subsidy of Rs. 10 to diesel. It is an accounting fudge rather than a real subsidy. The price of diesel as sold in India is still higher than petrol in many countries, making clear the accounting fiddle of the government. That is why the government uses the word “under-recoveries” when it talks of diesel rather than subsidy, while implying that all such under-recoveries are actually subsidies.

While the drive for diesel private cars in India hss been due to to the lower price of diesel, in Europe it was seen as a means for lowering carbon dioxide (CO2) emissions. Changing to diesel, with its higher efficiency from petrol engines, was perceived as an easier way of meeting Kyoto climate change targets than switching to electric cars or expanding mass public transport. Major car manufacturers in Europe, the same ones who have been fudging their emission tests, were on the forefront of this campaign for dieselisation of private cars. A fifth of all deaths in developed countries are now attributed to traffic pollution, largely because of diesel. Today, European experts and political figures accept that this shift to diesel was a huge mistake and has led to a public health disaster in European cities and towns.

In India, we need to address the policy towards diesel private cars. If we want to keep diesel price low for mass transport and transport of goods, why should we permit private diesel cars? Earlier, almost all private car manufacturers in India only made petrol cars. There were very few private diesel vehicles in Delhi and other cities two decades back. Today, more than 50% of new cars sold in Delhi are diesel cars. Not only are private diesel cars displacing petrols cars, they claim an even bigger market share when it comes to the bigger vehicles. The bulk of the SUVs and bigger private cars are diesel. The diesel car owners not only take advantage of the lower price of diesel, they also tend to buy bigger vehicles, increasing their share of pollution in the city.

The post 90’s policies in the country have been one of encouraging conspicuous consumption by the rich and subsidising their profligate lifestyle. Instead of restricting diesel vehicles for only public use, the rich were encouraged to take advantage of the lower price of diesel and to buy diesel vehicles. The case was then built that as diesel is now being used for private cars, the diesel “subsidy” should be eliminated. In other words, first encourage wasteful use of diesel, and then argue that since it is being used wastefully, the price of petrol and diesel should be the same.

The Delhi pollution shows that this attempt to promote diesel private cars has come at a hug cost. While Delhi’s air quality may have hit the news, the National Capital Region (NCR), as a whole, has similar figures, particularly satellite towns such as Gurgaon, Faridabad and Gaziabad. These towns have escaped notice as PM 2.5, one of the two culprits, is not even monitored in these towns. Air pollution does not respect artificial boundaries that we may draw up between various towns. Delhi’s air quality cannot be controlled without addressing the large issue – how do we control air pollution in the entire NCR?

The steps that Delhi Government is taking – odd and even numbered cars on alternate days — or what the Supreme Court has ordered, are all temporary measures. With the earlier Supreme Court’s intervention decreeing the use of CNG as fuel for public transport, Delhi’s air quality had improved significantly. Without a consistent set of follow-up policies, the gains that were made then, have been lost in just a few years.

If we want to control traffic pollution, we need to take measures that go well beyond immediate measures that the Courts and the Delhi Government is instituting.

As an immediate set of measures, we need to impose higher and more uniform standards for emissions, BS IV across the board, and BS VI in all towns above a certain population size by 2018 and later to the entire country. We need to clean up diesel as a fuel from the refineries, and lower the price of CNG for public transport.

But more importantly, we need to focus on what should be our policies for the transport sector and urban development.

The policies for the transport sector needs to be built around good and cheap public transport. Even in Delhi, where Delhi citizens buy more cars than all the other metros put together, 85% of the citizens use public transport and not private cars. It is these 15% who are imposing this heavy burden of poor air quality on all the citizens of Delhi.

Secondly, all private vehicles using diesel should be discouraged. There should be an immediate lifetime duty for diesel cars. This should be not only to remove the price advantage diesel car owners get for cheaper fuel, but should also include a penalty for the higher pollution of diesel cars. In the long run, diesel private cars should be phased out altogether.

Dangerous levels of air pollution in Delhi should trigger a debate on what kind of policies the country should have. It will be a tragedy, if we look at only stop-gap solutions for Delhi.

We have yet to see any response from the central government on this issue. The health of India’s citizens has little resonance with this government. For transport, all they can think of is Modi’s dream project of Bullet Trains. Sycophancy has become the order of the day in this government, with very little time for peoples’ issues.