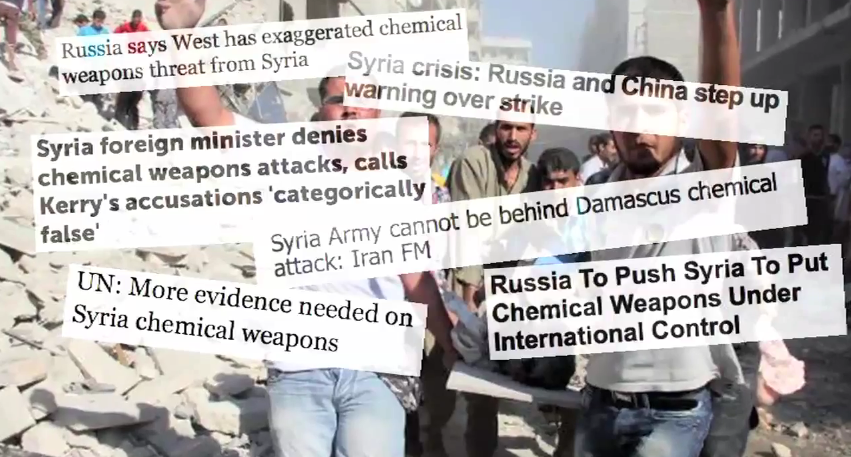 The world seems to be moving on two different tracks on the use of chemical weapons in Syria. Almost the only narrative in the US is did Assad regime use chemical weapons, but what should be the US response. The evidence of Assad government using chemical weapons needs to be at least plausible, for the world to accept US military strikes. In the rest of the world, barring perhaps only France, there is deep scepticism about such US claims.

The US media reflects very much the views of its government when it comes to issues of war and foreign policy. Just as in the case of Iraq and its mythical WMD’s, the US media has dutifully fallen in line with the Obama administration, “debating” vigorously about whether the US has the responsibility to police the world.

The belief that such strikes will be limited rests entirely on Syria not responding to such strikes. If they do, there is every possibility of the strikes and counter strikes spinning into a larger regional conflagration. The consequence for the rest of the world including India would be disastrous with oil prices going through the roof. That countries such as India, are unwilling to take a strong position and tell the US stop its dicing with a regional war is a telling commentary on the state of global diplomacy today.

The hypocrisy of western powers on chemical weapons is also quite astounding. The US not only supplied chemical and biological weapons to Iraq during the Iraq-Iran war (1980-88.) Officers from Pentagon were planning day-to-day strikes including chemical weapons against Iranian positions using satellite data for battlefield intelligence. So did the UK. Robert Fisk, the well-known journalist and commentator on Middle East, has talked about UK security services technicians he had met in Baghdad during the Iraq-Iran war, who had come to help Iraq build biological weapons.

The US used white phosphorus in Falluja, which is illegal to use against personnel. This has resulted in rates of cancer in Falluja that are higher than even in Hiroshima after the atom bomb. The US has used depleted uranium munitions widely in Iraq, which again is highly poisonous and carcinogenic. Its use of Agent Orange in Vietnam is again public knowledge. Agent Orange contained high levels of dioxin, one of the most poisonous chemicals known, and even today is causing thousands of deformities among the newborn. Israel has also used white phosphorous in Gaza in its 2008-2009 attack against civilian population.

The US not only covertly supported Saddam in his war against Iran, it also provided diplomatic cover in the UN by not condemning Iraq when Iran brought charges against it for use of chemical weapons. In Hallebja, where an estimated 5,000 Kurds died in Saddam’s attack using chemical weapons, CIA even fabricated evidence “showing” that Iran was responsible for the attack. For the US now to turn moralistic about international “norms” and the need to discipline Assad for use of chemical weapons sounds completely hollow, at least to the rest of the world, if not to its own citizens.

What is the evidence that the US, the UK and the French intelligence agencies have with them? Almost all the evidence is from classified sources, in other words, we are supposed to trust the same agencies that had cooked up the evidence for WMDs in Iraq. Even the numbers of victims differ. Kerry has an exact figure of 1429 without offering us any names or other details. Cameron talked about 500, the oft quoted Syrian Observatory of Human Rights 502, Doctors without Borders, 355. We can understand that figures may differ under the circumstances, but when we hear exact numbers such as 1429, we can be pardoned for believing that the US agencies are trying a little too hard!

There is one piece of evidence that is worth considering further. Kerry talks about intelligence intercept that shows that Syrian high ranking military officials were aware of the strike and presumably complicit in it. Again, Powell’s presentation of Iraq evidence in the UN comes to mind. There also he had made similar claims, except he had played intercepts for the world to hear. It transpired his claims were at variance with what the intercept actually contained, but at least he had presented the evidence. If the US has such intercepted evidence, why is it shy of presenting it to the world? Or has it learned from Powell’s mistake?

There are reports from various sources which indicate that the “original” evidence about the intercept is from Israel’s Military Intelligence Unit 822, their Signal Intelligence unit. It is supposedly from a Syrian officer from army headquarters enquiring from the unit having chemical munitions who had fired such weapons and the denial of this officer that his unit had fired any such weapon. It in fact substantiates the opposite – that the chemical attack was not launched by Assad’s forces. So two reasons why the US does not want to share the so-called voice intercept – it originates from Israel and by no means confirms the claim the US is making.

Here, it is important to make a distinction between poisonous chemicals and chemical weapons. As we saw in Bhopal, a number of industrial chemicals are highly toxic, and it is not clear without detailed analysis, presumably being carried out by the UN investigators that it was weaponised chemical agents that were used. If non-weaponised chemical agents are the cause, obviously a much larger group of people have access to these chemicals. Even an accident – bombing of a chemical factory – can release poisonous chemicals.

Kerry has talked of a sarin signature in the samples from victims. Even apart from the issue of chain of custody of such samples –who collected them, who transferred them and how credible is the analysis – mere signature of sarin is not enough to establish sarin use. A number of other neurotoxic chemicals share a similar signature. This is the problem with much of the US evidence. It continuously stretches the language to imply more than it actually is saying.

If it is true that weaponised sarin has been used, is it true that only Assad’s forces have access to such chemical weapons? Here, the US case is even weaker. After two years of war and rebels having overrun a number of Assad’s weapon depots and bases, the argument that rebels cannot have any chemical weapons is indeed very weak. There have been reports from Turkey of Syrian rebels aligned with Jabhat Al Nusra, being found with two kilograms of sarin, and also similar reports from Iraq. The US intelligence agencies in the past have also claimed that Al Qaeda has chemical weapons capability.

It may also be remembered that Aum Shinrikiyo had manufactured sarin with the help one chemist and home-made facilities. Obviously if a crazed cult in Japan could make sarin 20 years back, to argue only Assad has chemical weapons in Syria needs a high degree of naiveté.

The UN team in Syria had earlier come to the conclusion that it is the rebels – not Assad –that have used chemical weapons and specifically sarin in Syria. Carla del Ponte, one of its inspectors had gone public with this in May this year regarding the rebels use of sarin.

Further, it is known and verified by international agencies that Libya had chemical weapons, even though Gaddafi’s regime had agreed to destroy all of it after joining the Chemical Weapons Convention in 2004. After Gaddafi was overthrown, undisclosed chemical munitions were discovered. OPCW, the official body that oversees the chemical weapon convention has a time table for the destruction of these weapons, which it has been unable to fulfill. Given that Libya is now in the hands of groups closely allied with Al Qaeda, it would not be surprising if such weapons find their way to the Syrian rebels and Al Qaeda affiliates such as Jabhat al Nusra.

There are also credible reports (Mint Press News) that Saudi Arabia has supplied chemical weapons to the Syrian rebels. Dale Gavlak and her associate, Yahya Abbaneh, a Jordanian freelancer, have reported from Ghouta, the scene of the chemical incident, that Saudi Arabia had supplied the rebels with chemical weapons. They have spoken with the residents, the father of one of those killed who was handling such weapons and to other residents of the area. The residents talk about such weapons being stored in tunnels in Ghouta. The picture that emerges is not a willful strike but an accident as those who were handling chemical weapons did not know much about them.

The argument that Saudi Arabia has no chemical weapons programme cuts little ice. They can easily assemble such a programme or buy such arms from the black market. Or procure them from Libya, which is awash with weapons.

There is also corroborative evidence from other sources – Syrian News agency SANA has reports including videos of tunnels containing chemical weapons and other materials with Saudi markings being found in Ghouta. They have also complained of their soldiers being affected by sarin on entering such tunnels. There are also reports of Hezbollah fighters of being treated for sarin in a hospital in Lebanon after fighting in Ghouta.

The question that could also be asked is why does Syria have chemical weapons when most of the world has given up its use? The answer is a simple one. Syria has said time and again that they will give up their chemical weapons if Israel gives up its nuclear weapons; it is their insurance against a nuclear strike by Israel. And just for record, though the US has joined the Chemical Weapons Convention, it still has a stockpile of such weapons. It has missed its deadline for destruction of its stockpile that it was obligated to do by 2012.

Ariel Sharon had said just before the Iraq attack in 2003, “Iran, Libya and Syria should be stripped of weapons of mass destruction after Iraq. These are irresponsible states, which must be disarmed of weapons of mass destruction”. Iraq and Libya have already fallen; Syria and Iran remain from Sharons’ list. All this talk of international norms is a cynical ploy for the larger strategic objectives of the US-Israel axis in the region. The bombing of Syria is the first step in the unfolding battle that finally targets Iran. This is the grand strategy to establish Israel as the only military power in the region. This is the “humanitarian” US mission: bomb the people of Syria and lit the fire for a much larger war. While the rest of the world watches the US light the fuse.