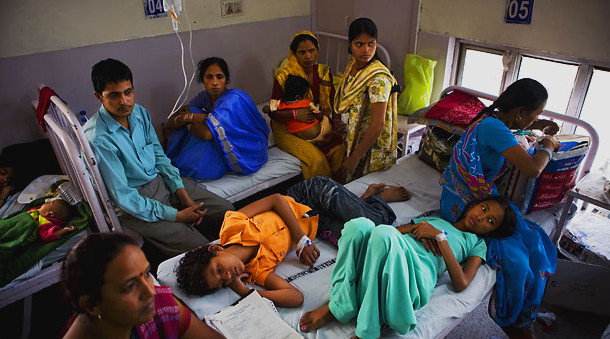 The past year once again provides a clear picture of neglect of public health by the BJP led government and further, a disdain towards policies that promote welfare. The year has seen several outbreaks of infectious diseases such as dengue and chikungunya, often reaching epidemic proportions in many parts of the country. The epidemics have laid bare the inability of the country’s health systems to protect people’s health. Yet successive budgets presented by the BJP government have strengthened the perception that this government is ideologically committed to reducing public expenditure on welfare and public services. The past year has again seen a singular reluctance, on the part of the government, to even spell out a clear approach to health care. The Niti Ayog has played its due role of a neoliberal right-wing think tank by consistently shooting down even mildly progressive proposals that have been put forward by the ministry of health.

WHY THE DELAY IN ANNOUNCING THE NATIONAL HEALTH POLICY?

The policy, even in its draft form, was not released for over a year because of the Niti Ayog’s unhappiness with certain formulations made in the redrafted draft Policy.  It was reported in sections of the press that the policy was criticised by the Niti Ayog for suggesting a key role for public services.

The bogey of ‘fiscal discipline’ has been repeatedly raised to restrict public financing of the health sector. Within months of assuming office, in end 2014, the government signaled its intentions clearly by slashing 20 percent of committed central funds to the health sector. The union budget of 2015-16 continued in the same vein and effected a 5.7 percent cut in total allocation to the health sector.

The 2016-17 budget provides further indications that the government intends to continue with its policy of promoting ‘managed care’ where publicly provided services are progressively starved of resources and even public funded services are increasingly outsourced to the private sector. Overall, allocation to the ministry of health and family welfare saw a marginal increase from 32,819 crores in the Revised Estimates (RE) for 2015-16 to Rs 37,061 crores. After adjusting for inflation this represents a mere 5 percent per capita increase. Even the grossly understated ambition of the draft National Health Policy is to increase healthcare expenditure to 2.5 percent of GDP. This would require a doubling of current expenditure and even simple mathematics would indicate that this would entail a 25-30 percent per capita increase in allocation every year, if the target of 2.5 percent of GDP spending on healthcare is to be achieved in the next five years.

What is particularly worrying is that the trend of starving the National Health Mission (NHM) of funds continues. Allocation for the NHM saw an insignificant rise – from Rs 19,135.37 crore in 2015-16 year to Rs 19,437 for 2016-17. Given the impact of inflation and population increase this actually represents a 6-7 percent decrease, per capita, in allocation for the NHM. The underfunding of the NHM should be read in the light of the draft National Health Policy’s comment that “Strengthening health systems for providing comprehensive care required higher levels of investment and human resources than were made available. The budget received (for the National Rural Health Mission) and the expenditure thereunder was only about 40 percent of what was envisaged for a full re-vitalisation in the NRHM Framework”.

In the medicines sector we have further indications that the government is planning to further liberalise regulations. It is understood that the government is actively considering the Niti Ayog’s suggestion that regulation of drug prices should be delinked from the National List of Essential Medicines and that the National Pharmaceutical Pricing Authority in its present form should be wound up. Reports leaked in the press also provide evidence that the government has assured US Companies that it would not issue compulsory licenses to bring down the costs of exorbitantly priced patented medicines being sold by multinational corporations.

A positive step taken by the government was the order to ban 348 irrational combinations of drugs. This order was however overturned by the Delhi High Court and the government is yet to signal how it is proposing to challenge this order in the Supreme Court.

In its 2014 manifesto the BJP had promised that “the overarching goal of healthcare would be to provide, ‘Health Assurance’ to all Indians…”. That “health assurance” in the BJP’s lexicon is synonymous with health insurance and public-private partnership was made clear within weeks of assuming office by the then health minister, Dr Harsh Vardhan. In one of his first interactions with the media, Dr Harsh Vardhan said that “the government would work to provide ‘health insurance coverage for all’ through a national insurance policy for health”. Dr Harsh Vardhan, echoing the BJP’s core philosophy had also said that that he is “not in favour of taxpayers’ money being used to push a one-size-fits-all health policy”. In other words the BJP made it clear, right from the time it assumed office, that it would not expand public services and would instead roll out the red carpet for private providers of health care.

In contrast to the clear and deliberate intent to choke financial resources available to public health services through the National Health Mission, is the headline declaration in the 2016 budget speech of the finance minister that the public funded health insurance scheme would be expanded. The BJP government’s obsession with the promotion of insurance based care (which involves public funding but outsourcing of over 80 percent of services to the private sector) need to be examined in the context of mounting evidence that existing national and state health insurance schemes have failed to rein in catastrophic health expenditure incurred by the poor. The latest NSSO data indicates that the penetration of such insurance schemes is just 13 percent in rural areas and 12 percent in urban areas.

The problem lies not only with inadequate coverage but also with the way the system is milked by unscrupulous private providers for financial gains. These schemes, largely implemented through partnerships with private providers, have been indicted in several states for defrauding the system of hundreds of crores by performing unnecessary surgeries (for example a huge rise in

unnecessary uterus removal operations) and for not contributing to better health outcomes.

GAP BETWEEN RHETORIC AND DELIVERY

This government’s approach to welfare services is characterised by a basic lack of honesty and a huge gap between rhetoric and delivery. Thus, for example, the 2016-17 budget, announced with considerable fanfare a plan to set up 3,000 Jan Aushadhi shops, which would sell medicines by generic names at fair prices. A closer look at the budget papers show that the scheme has been allocated a mere 35 crores in the 2016-17 budget. Even the centrally funded health insurance scheme (now renamed the ‘Rashtriya Swasthya Suraksha Yojana’) receives an allocation of only 1,500 crores in the 2016-17 budget. 1,500 crores to cover a population of 120 crores is a crude joke and lays bare the hypocrisy implicit in even schemes that the BJP government tom-toms as one of its key priorities. This meager allocation can be contrasted with the grandiose announcement in the finance minister’s budget speech this year that insurance coverage under the insurance scheme is being increased from 30,000 per family to 1,00,000 per family. The truth is that the government doesn’t expect that even its favourite scheme will actually be rolled out in any significant manner.

The impact of these policies is clearly being felt. The NHM’s activities have faltered in many states and in some states they have stuttered to a standstill. Serious shortages of consumables and human resources have surfaced, with widely reported periodic stock-outs of medicines for the HIV and TB programmes.

A VISION BASED ON AGGRESSIVE PRIVATISATION

The BJP government’s approach to health care is driven by neoliberal economics which seeks to promote private provision of hitherto public services and an overall withdrawal of the government from financing or providing public services. India’s health system is one of the most privatised in the world and public expenditure is one of the lowest. Yet the unstated game plan of the BJP government is to cap public expenditure at a minimum level and at the same time, through public policy measures, encourage the growth of private providers.

The parliamentary committee report about the working of the Medical Council of India (MCI), released this year, pointed to the extreme depths of corruption that permeates private practice and medical education. The BJP is engaged in a desperate bid to suppress the murky details of the ‘Vyapam’ scam in the BJP ruled state of MP. The scam involves corruption at the highest levels of the bureaucratic and political structures in the state, who have connived to make a mockery of medical education. Yet the government refuses to address the twin problems that fuel corruption in the health sector – the unbridled growth of private medical colleges (nationally the number of seats in private colleges has grown from less than 10 percent to around 50 percent in the last quarter of a century) and the rapid expansion of unregulated private medical care. While the government sheds crocodile tears about the state of the MCI and proposes various reforms, it now proposes to legitimise the ownership of medical colleges by profit making companies, thus clearing the way for medical education to become a commercial enterprise.

The BJP’s vision of healthcare has little role for public health services. It would like public services to be increasingly outsourced to the private sector. Insurance mechanisms and not public provisioning is the pivot of its so-called ‘health assurance’ model. In the past few weeks when the government has declaimed repeatedly about the benefits of the demonetisation scheme, seldom has there been even a stray remark that extra resources that the government expects to have at its disposal will be utilised to support public services. We hear repeated exhortations by government spokespersons and their drummer boys regarding the necessity to support a cashless economic system, not a system where public services are free! India is repeatedly singled out as one of the worst performing countries as regards provision of public services for healthcare and 70 percent of healthcare costs are met by patients through out of pocket expenses. Yet the new mantra is to achieve cashless transaction, not to eliminate payment for access to healthcare services.